Disk Cache, Hybrid Disk Cache and RamDisk. In-the-Lab: NexentaStor vs ESXi, Redux « SolutionOriented Blog. In my last post, I mentioned a much complained about “idle” CPU utilization quirk with NexentaStor when running as a virtual machine. 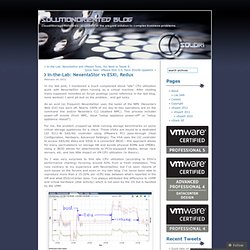 After reading many supposed remedies on forum postings (some reference in the last blog, none worked) I went pit-bull on the problem… and got lucky. As an avid (er, frequent) NexentaStor user, the luster of the NMV (Nexenta’s Web GUI) has worn off. Nearly 100% of my day-to-day operations are on the command line and/or Nexenta’s CLI (dubbed NMC). This process includes power-off events (from NMC, issue “setup appliance power-off” or “setup appliance reboot”). For me, the problem cropped-up while running storage benchmarks on some virtual storage appliances for a client. So I was very surprised to find idle CPU utilization (according to ESXi’s performance charting) hovering around 50% from a fresh installation. CPU record of idle and IOzone testing of SAS-attached VSA Confirming the impact of the "fix" on a second fresh installed NexentaStor VSA. Plug and Play Caching Software Accelerates Enterprise Business Applications. 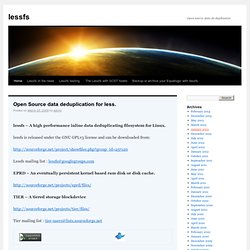 The price of increasing the number of disks in an array adds up quick, to say nothing of the investment in additional JBODs when you run out of slots in your array. And although the cost of consumer-grade memory has fallen, relying upon RAM for caching in enterprise environments can get expensive, quickly. Worse, once you run out of DIMM slots for all that RAM, you’re left with no way to increase the size of your cache aside from purchasing more servers and building a clustered environment.

Cheaper IOPS: SSD vs Spinning Rust SSDs, on the other hand, are cheap when compared to RAM, and fast when compared to disk. That’s a ton of cache. Should we give a MySQL Query Cache a second chance ? April 10, 2011 by Peter Zaitsev67 Comments Over last few years I’ve been suggesting more people to disable Query Cache than to enable it. 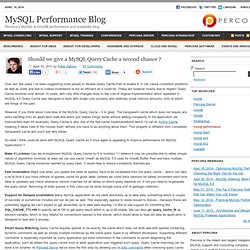 It can cause contention problems as well as stalls and due to coarse invalidation is not as efficient as it could be. These are however mostly due to neglect Query Cache received over almost 10 years, with very little changes done to the core of original implementation which appeared in MySQL 4.0 Query Cache was designed to work with single core systems and relatively small memory amounts, both of which are things of the past. However, if you think about Core idea of the MySQL Query Cache – it is great. The transparent cache which does not require any extra handling from an application side and which just makes things faster without adding complexity to the application (as memcached does for example). So what I think could be done with MySQL Query Cache so it once again is appealing to improve performance for MySQL Applications ? The Top Ten Storage Startups - Dave Simpson's Blog. UPDATED Feb. 4, 2011 – Last year, the number of startups that entered the storage market just about equaled the number of storage vendors that were acquired in the M&A fever. 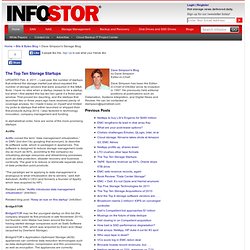 I have no idea when a startup ceases to be a startup, but when I first started this top ten list I gave it a three-year window. That proved too daunting, and the startups that launched two or three years ago have received plenty of coverage anyway. So I made it easy on myself and limited my picks to startups that either launched or shipped their first products during 2010. I also factored in technology innovation, company management and funding. In alphabetical order, here are some of the more promising startups: Actifio Actifio coined the term “data management virtualization,” or DMV (but don’t try googling that acronym), to describe its software suite, which is packaged in appliances.

Related article: “Actifio introduces data management virtualization” (InfoStor) BridgeSTOR Cirtas Systems Gridstore Infineta Kaminario. Virsto - Get Virsto One. Please select your category, review options for volume discounts, type in the number of licenses you are ordering, and complete your order for Virsto One. 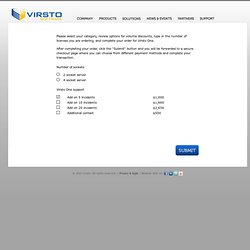 After completing your order, click the "Submit" button and you will be forwarded to a secure checkout page where you can choose from different payment methods and complete your transaction. Number of sockets Virsto One perpetual licenses Virsto One support © 2010 Virsto. SanDisk Acquires Flash Caching Company FlashSoft. February 15th, 2012 by Kevin OBrien SanDisk announced today announced the acquisition of the flash-caching company FlashSoft. 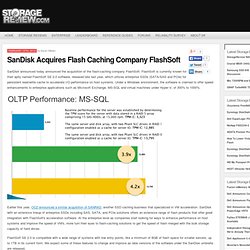 FlashSoft is currently known for their aptly named FlashSoft SE 2.0 software, released late last year, which utilizes enterprise SSDs (SATA/SAS and PCIe) for persistent read/write cache to accelerate I/O performance on host systems. Under a Windows environment, the software is claimed to offer speed enhancements to enterprise applications such as Microsoft Exchange, MS-SQL and virtual machines under Hyper-V, of 300% to 1000%. Earlier this year, OCZ announced a similar acquisition of SANRAD, another SSD caching business that specialized in VM acceleration. SanDisk with an extensive lineup of enterprise SSDs including SAS, SATA, and PCIe solutions offers an extensive range of flash products that offer great integration with FlashSoft's acceleration software. 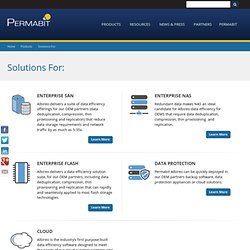 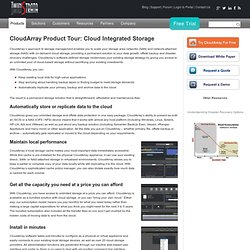 CloudArray’s software-defined storage modernizes your existing storage strategy by giving you access to an unlimited pool of cloud-based storage without sacrificing your existing investments. With CloudArray, you can: Keep existing local disk for high-value applicationsStop worrying about handling backup tapes or finding budget to meet storage demandsAutomatically replicate your primary, backup and archive data to the cloud The result is a permanent storage solution that is straightforward, affordable and maintenance-free. Automatically store or replicate data to the cloud CloudArray gives you unlimited storage and offsite data protection in one easy package. Maintain local performance Install in minutes Free CloudArray Download.