Human species 'may split in two' Humanity may split into two sub-species in 100,000 years' time as predicted by HG Wells, an expert has said. 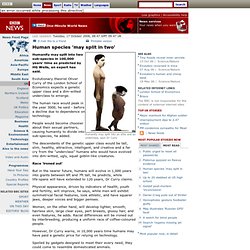 Evolutionary theorist Oliver Curry of the London School of Economics expects a genetic upper class and a dim-witted underclass to emerge. The human race would peak in the year 3000, he said - before a decline due to dependence on technology. People would become choosier about their sexual partners, causing humanity to divide into sub-species, he added. All 2.3 Million Species Are Mapped into a Single Circle of Life. Since Charles Darwin's day, biologists have depicted how new organisms evolve from old ones by adding branches to numerous trees that represent portions of the animal, plant and microbial kingdoms. 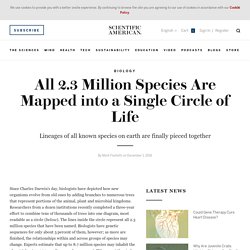 Researchers from a dozen institutions recently completed a three-year effort to combine tens of thousands of trees into one diagram, most readable as a circle (below). The lines inside the circle represent all 2.3 million species that have been named. Biologists have genetic sequences for only about 5 percent of them, however; as more are finished, the relationships within and across groups of species may change. Experts estimate that up to 8.7 million species may inhabit the planet (about 15,000 are discovered every year). 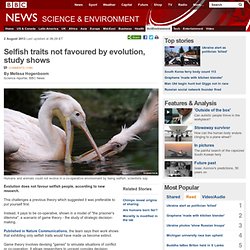 This challenges a previous theory which suggested it was preferable to put yourself first. Instead, it pays to be co-operative, shown in a model of "the prisoner's dilemma", a scenario of game theory - the study of strategic decision-making. Published in Nature Communications, the team says their work shows that exhibiting only selfish traits would have made us become extinct.

15 Answers to Creationist Nonsense. When Charles Darwin introduced the theory of evolution through natural selection 143 years ago, the scientists of the day argued over it fiercely, but the massing evidence from paleontology, genetics, zoology, molecular biology and other fields gradually established evolution's truth beyond reasonable doubt. 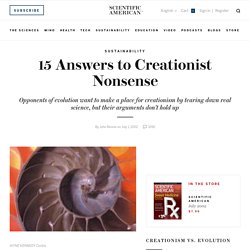 Today that battle has been won everywhere--except in the public imagination. Embarrassingly, in the 21st century, in the most scientifically advanced nation the world has ever known, creationists can still persuade politicians, judges and ordinary citizens that evolution is a flawed, poorly supported fantasy. They lobby for creationist ideas such as "intelligent design" to be taught as alternatives to evolution in science classrooms. As this article goes to press, the Ohio Board of Education is debating whether to mandate such a change. Some antievolutionists, such as Philip E. The Complete Work of Charles Darwin Online.