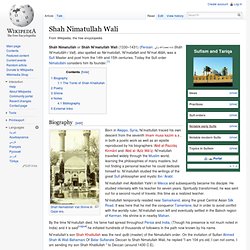 Today the Sufi order Nimatullahi considers him its founder.[1] Biography[edit] Born in Aleppo, Syria, Ni’mattullah traced his own descent from the seventh Imam musa kazim a.s , in both a poetic work as well as an epistle reproduced by his biographers ‘Abd al-Razzāq Kirmānī and ‘Abd al-‘Azīz Wā’iẓ. Ni'matullah travelled widely through the Muslim world, learning the philosophies of many masters, but not finding a personal teacher he could dedicate himself to. Ni'matullah studied the writings of the great Sufi philosopher and mystic Ibn ʿArabī. 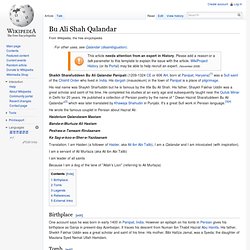 His dargah (mausoleum) in the town of Panipat is a place of pilgrimage. His real name was Shaykh Sharfuddin but he is famous by the title Bu Ali Shah. His father, Shaykh Fakhar Uddin was a great scholar and saint of his time. He completed his studies at an early age and subsequently taught near the Qutub Minar in Delhi for 20 years. Carl W. Ernst. Carl W. 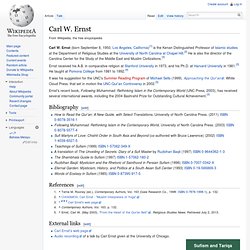 Ernst (born September 8, 1950, Los Angeles, California)[1] is the Kenan Distinguished Professor of Islamic studies at the Department of Religious Studies at the University of North Carolina at Chapel Hill.[2] He is also the director of the Carolina Center for the Study of the Middle East and Muslim Civilizations.[3] Ernst received his A.B. in comparative religion at Stanford University in 1973, and his Ph.D. at Harvard University in 1981.[3] He taught at Pomona College from 1981 to 1992.[4] It was his suggestion for the UNC's Summer Reading Program of Michael Sells (1999). Approaching the Qurʼan. 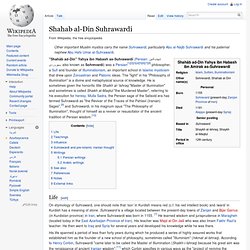 "Shahāb ad-Dīn" Yahya ibn Habash as-Suhrawardī (Persian: شهاب‌الدین سهروردی‎, also known as Sohrevardi) was a Persian[1][2][3][4][5][6][7][8] philosopher, a Sufi and founder of Illuminationism, an important school in Islamic mysticism that drew upon Zoroastrian and Platonic ideas. The "light" in his "Philosophy of Illumination" is a divine and metaphysical source of knowledge. Rukn-e-Alam. Dhikr. Dhikr (or Zikr, "Remembrance [of God]", "pronouncement", "invocation"; Arabic: ذکر‎ ḏikr, plural أذكار ʾaḏkār, Arabic pronunciation: [ðɪkr, ʔæðˈkɑːr]), is an Islamic devotional act, typically involving the (sometimes silent) recitation of the Names of God, and of supplications taken from hadith texts and Qur'anic verses, according to Sunni Islam.

Essentially, the practice of dhikr is a form of prayer in which the Muslim will express his or her remembrance of God either within or overtly; this may come in the form of recitation or simply always remembering God in one’s heart. The word dhikr is commonly translated as "remembrance" or "invocation". Bulleh Shah. Bulleh Shah, sometimes Bulla(h) Shah (1680–1757) (Punjabi: بلہے شاہ (Shahmukhi); ਬੁੱਲ੍ਹੇ ਸ਼ਾਹ (Gurumukhi)) was a Punjabi Sufi poet, humanist and philosopher. 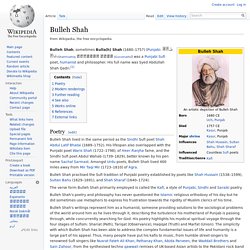 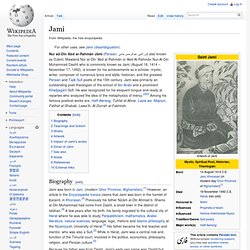 The image blends Persian poetry and Persian miniature into one, as is the norm for many works of Persian literature. Bawa Muhaiyaddeen. This article describes the Sufism philosopher, for the Sri Lankan architect see Geoffrey Bawa. 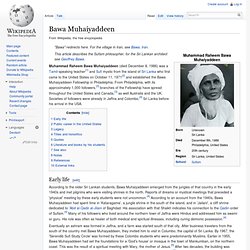 Muhammad Raheem Bawa Muhaiyaddeen (died December 8, 1986) was a Tamil-speaking teacher[1] and Sufi mystic from the island of Sri Lanka who first came to the United States on October 11, 1971[2] and established the Bawa Muhaiyaddeen Fellowship in Philadelphia. From Philadelphia, with its approximately 1,000 followers,[3] branches of the Fellowship have spread throughout the United States and Canada,[3] as well Australia and the UK. Societies of followers were already in Jaffna and Colombo,[4] Sri Lanka before his arrival in the USA. Dervish. A Dervish or Darvesh[1] (from Persian درویش, Darvīsh[2] via Turkish,[3] Somali: Daraawiish, Arabic: درويش‎, Darwīš) is someone treading a Sufi Muslim ascetic path or "Tariqah", known for their extreme poverty and austerity. 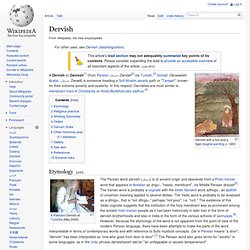 In this respect, Dervishes are most similar to mendicant friars in Christianity or Hindu/Buddhist/Jain sadhus.[4] Etymology[edit] The Persian word darvīsh (درویش) is of ancient origin and descends from a Proto-Iranian word that appears in Avestan as drigu-, "needy, mendicant", via Middle Persian driyosh[5] The Iranian word is probably a cognate with the Vedic Sanskrit word adhrigu-, an epithet of uncertain meaning applied to several deities. The Vedic word is probably to be analysed as a-dhrigu-, that is "not dhrigu-," perhaps "not poor", i.e. Baha-ud-din Zakariya. 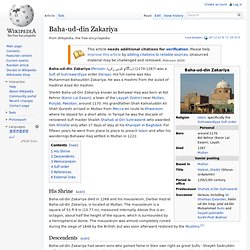 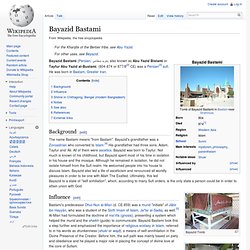 Baqaa. Baqaa (Arabic: بقاء‎ baqāʾ ), with literal meaning of permanency, is a term in Sufi philosophy which describes a particular state of life with God, through God, in God, and for God. It is the summit of the mystical manazil, that is, the destination or the abode. Baqaa comprises three degrees, each one referring to a particular aspect of the divine theophanies as principle of existence and its qualitative evolution, consisting of faith, knowledge, and grace. Aspects[edit] First aspect: the level of acts[edit] The first aspect of the Sufi permanency is situated at the level of acts. Second aspect: the level of qualities and attributes[edit] The second aspect of permanency is situated at the level of qualities and attributes. Third aspect: the level of the essence[edit] Bektashi. The Bektashi Order (Turkish: Bektaşi Tarikatı), or the ideology of Bektashism (Turkish: Bektaşilik), is an Islamic Sufi order (tariqat) founded in the 13th century by the Persian[1][2][3][4] Wali (saint) Haji Bektash Veli.

The order is mainly found throughout Anatolia and the Balkans, and was particularly strong in Albania, Bulgaria, and among Ottoman-era Greek Muslim converts from the regions of Epirus and Greek Macedonia in Northern Greece, such as the Vallahades. However, the Bektashi order does not seem to have attracted quite as many adherents from among the descendants of Ottoman-era converts to Islam in the northern Balkans, such as the Bosnian Muslims, who tended to favour more mainstream Sunni orders such as the Naqshbandiyya and Qadiriyya.

Alauddin Sabir Kaliyari. Hazrat Alauddin Ali Ahmed, also known as صابر کلیری Sabir Kaliyari ("Patient Saint of Kaliyar"), is a prominent South Asian Sufi saint in the 13th century, nephew and Khalifa (successor) to Baba Fareed (1188–1280),[1] and the first in the Sabiriya branch of the Chishti Order. Today, his dargah (Sufi mausoleum) at Kaliyar village, near Haridwar, is one of the most revered shrines for Muslims in India, after Ajmer Sharif at Ajmer, Rajasthan, and is equally revered by Hindus and Muslims in South Asia.[2] Biography[edit] Hazrat Syed Alauddin Ali Ahmed Sabir Kaliyari was born in Herat, a town in the district of ( Afghanisthan) on the 17th Shahbanon 19, 512 Hijri (1196).[2] His father was Syed Abdul Rahim, a descendent of Hazrat Gaus E Azam Dastagir.

His mother was Jamila Khatun, the elder sister of Baba Fareed. He is known as Alauddin Ali Ahmed Sabir Kalyari. Education and marriage legend[edit] Sabir was recognized for his brilliance. Baha-ud-Din Naqshband Bukhari. Chishti Order. Ashraf Jahangir Semnani. Annemarie Schimmel. Annemarie Schimmel, SI, HI (April 7, 1922 – January 26, 2003) was a well known and very influential German Orientalist and scholar, who wrote extensively on Islam and Sufism. She was a professor at Harvard University from 1967 to 1992. Early life and education[edit] Schimmel was born to Protestant and highly cultured middle-class parents in Erfurt, Germany on 7 April 1922.[1] Her father, Paul, was a postal worker and her mother, Anna belonged to a family with connections to seafaring and international trade.

Schimmel remembered her father as "a wonderful playmate full of fun", her mother made her feel she was the child of her dreams and her home as full of poetry and literature, though her family was not an academic one.[2] After working voluntarily for half a year in the Reich Labour Service she began studying at the University of Berlin in 1939 at the age of 17, during the period of Nazi Germany. Al-Ghazali. Ali Hujwiri. Alevi. Khwaja Bande Nawaz. Amir Khusrow. Khoja Akhmet Yassawi. Muhammad al-Jazuli. Najmuddin Kubra. Lal Shahbaz Qalander. Nasiruddin Chiragh Dehlavi. Safi-ad-din Ardabili. Attar Neyshapuri.