Philippines, Vietnam Affirm United Front on S. China Sea. The presidents of the Philippines and Vietnam are showing a more united front on the disputed South China Sea issue on the sidelines of the Asia-Pacific Economic Cooperation leaders’ summit, where the topic is officially not up for discussion. 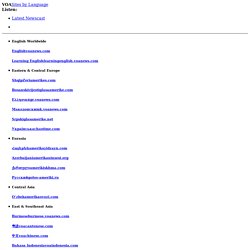 The two countries elevated their relations to a “strategic partnership” with a signed joint statement Tuesday. The agreement is aimed at boosting their ties on defense, trade and maritime cooperation. Philippine President Benigno Aquino welcomed “the active engagement and cooperation” between their militaries. Bangladesh Upholds Death Sentences for War Crimes. Video Obama Unveils SE Asia Maritime Plan Despite not being on the official agenda at the Asia-Pacific Economic Cooperation (APEC) summit this week, maritime disputes in the South China Sea took center stage Tuesday in the Philippines when President Barack Obama pledged to help Asia-Pacific allies boost their maritime security. 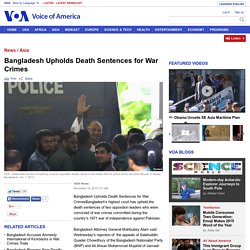 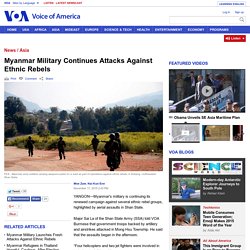 Major Sai La of the Shan State Army (SSA) told VOA Burmese that government troops backed by artillery and airstrikes attacked in Mong Hsu Township. He said that the assaults began in the afternoon. “Four helicopters and two jet fighters were involved in today’s attack," he said. No official casualty figures were made available for the latest clashes, but a rebel spokesman claimed at least five bodies of government soldiers were discovered along with some small arms and ammunition on Monday. The Independent. Economist - World News, Politics, Economics, Business & Finance. Vietnam Activists Urge Leaders to Cancel Visit by China's Xi. More than 100 Vietnamese activists have written an open letter to government authorities urging them to rescind a reported plan to welcome Chinese President Xi Jinping to Hanoi. 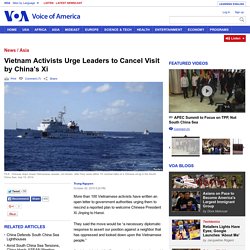 Vietnam War veteran to receive military's highest decoration for daring rescue of 8 soldiers. The daring rescue was something off of a movie screen – the type of war flick where one thinks "That was cool, but there's no way it ends like that in real life. 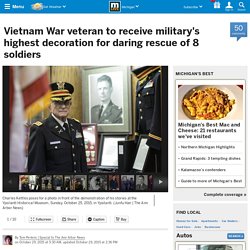 " On May 15, 1967, northwest of Duc Pho Airfield in Vietnam's central highlands, orders came in for Charles "Chuck" Kettles, commander of the 176th Assault Helicopter Company's first platoon, to evacuate 44 soldiers pinned down by the North Vietnamese Army in a battle that wasn't going well for the Americans. Eight choppers landed, the soldiers scrambled aboard, and the helicopters were airborne with minutes - mission accomplished. So everyone thought. As the helicopters lifted to 2,000 feet and pointed toward Duc Pho, word came over the radio that eight men remained on the ground. Without hesitation or a second thought, Kettles, who had only one man aboard his UH-1D, turned around and swooped back into the mostly evacuated battlefield, providing dozens of North Vietnamese guns a large, easy, sitting target. 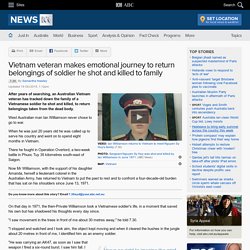 West Australian man Ian Williamson never chose to go to war. Vietnam war's 'napalm girl' Kim Phuc has laser treatment to heal wounds. In the photograph that made Kim Phuc a living symbol of the Vietnam war, her burns aren’t visible – only her agony as she runs wailing toward the camera, her arms flung away from her body, naked because she has ripped off her burning clothes. 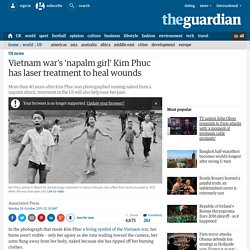 More than 40 years later she can hide the scars beneath long sleeves, but that betrays the pain she has endured since that errant napalm strike in 1972. Now she has a new chance to heal – a prospect she once thought possible only in a life after death. “So many years I thought that I have no more scars, no more pain when I’m in heaven. China and Vietnam pledge good ties and maritime peace. Image copyright AP China and Vietnam have pledged to be "good neighbours" and agreed to maintain peace in the South China Sea. 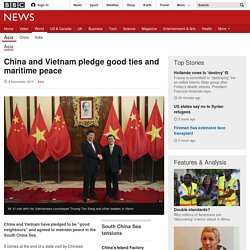 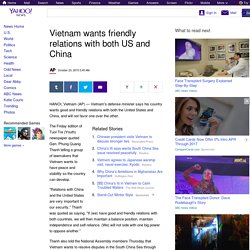