We at Vikson are The most trusted trading backed by 31 years’ team experience. We are a member of NSE, BSE, MCX, NCDEX, and CDSL Our trading base in all major trading exchanges provides you easy access to multiple asset classes throughout the market.

Useful Guidance for Beginners in the Stock Market. Comprehensive Knowledge About the GST Bill. What is the GST? 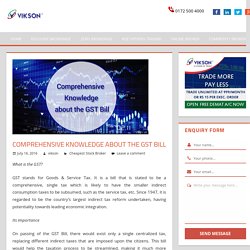 GST stands for Goods & Service Tax. It is a bill that is stated to be a comprehensive, single tax which is likely to have the smaller indirect consumption taxes to be subsumed, such as the service tax, etc. Since 1947, it is regarded to be the country’s largest indirect tax reform undertaken, having potentiality towards leading economic integration. Its importance On passing of the GST Bill, there would exist only a single centralized tax, replacing different indirect taxes that are imposed upon the citizens. How to Choose a Discount Broker. A discount broker comes as a saviour for investors who do not like paying exorbitant fees. 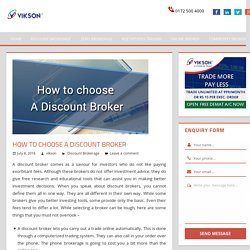 Although these brokers do not offer investment advice, they do give free research and educational tools that can assist you in making better investment decisions. When you speak about discount brokers, you cannot define them all in one way. They are all different in their own way. While some brokers give you better investing tools, some provide only the basic. Even their fees tend to differ a lot. A discount broker lets you carry out a trade online automatically. Giving Wings to Passengers. Giving Wings to Passengers The Indian Government has been taking keen interest in the welfare of the nation’s overall economic improvement. 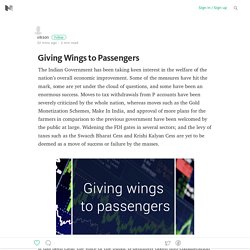 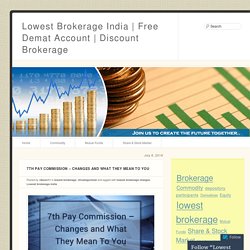 Knowing How To Gain Profits In The Stock Market. It is a fact that the stock market has been luring thousands of people to enter it with the objective of gaining profits. 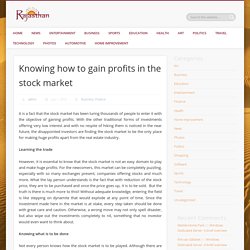 With the other traditional forms of investments offering very low interest and with no respite of hiking them is noticed in the near future, the disappointed investors are finding the stock market to be the only place for making huge profits apart from the real estate industry. Stock Markets: A Field of Investment Opportunities, Better Than Just Saving. Bollywood’s Baadshah and one of the top earning actors of the WORLD, Shah Rukh Khan, whose net worth interestingly an estimated USD $600 million had once said that “Don’t become a philosopher before you become rich. 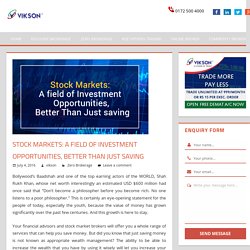 No one listens to a poor philosopher.” This is certainly an eye-opening statement for the people of today, especially the youth, because the value of money has grown significantly over the past few centuries. And this growth is here to stay. Your financial advisors and stock market brokers will offer you a whole range of services that can help you save money. But did you know that just saving money is not known as appropriate wealth management? Availing Useful Information About Online Commodity and Share Trading. The fact is that online share trading can prove to be a wonderful choice for many, who are contemplating to accumulate wealth within a short time frame. 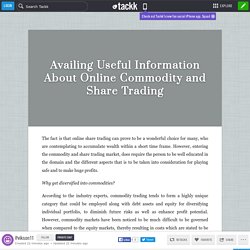 However, entering the commodity and share trading market, does require the person to be well educated in the domain and the different aspects that is to be taken into consideration for playing safe and to make huge profits. Why get diversified into commodities? Commodity Trading is a Wonderful Way for Earning Huge Profits. Changes in earnings from PPF and other small savings schemes: Business Articles. The Indian Government is contemplating reducing the interest rate applicable for small savings schemes, such as the Kisan Vikas Patra, senior citizens deposits such as the post office recurring deposits, and most importantly, Public Provident Fund (PPF). 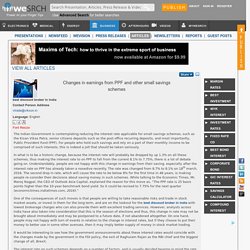 For people who hold such savings and rely on a part of their monthly income to be comprised of such interests, this is indeed a jolt that should be taken seriously. In what is to be a historic change, because the interest rate will probably be dropped by up 1.3% on all these schemes, thus making the interest rate to on PPF to fall from the current 8.1% to 7.75%, there is a lot of debate going on. Understandably, people are not happy with this change in earnings from their saving, especially after the interest rate on PPF has already taken a nosedive recently. The rate was changed from 8.7% to 8.1% on 18th march, 2016. How to Enter the Indian Stock Market? Microsoft Makes an Unconventional Move. When the name Microsoft comes up, what come to mind is technology, computers, and of late smart phones. 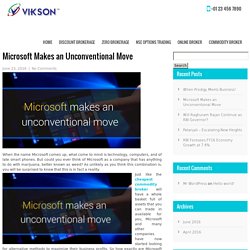 But could you ever think of Microsoft as a company that has anything to do with marijuana, better known as weed? As unlikely as you think this combination is, you will be surprised to know that this is in fact a reality. Just like the cheapest commodity broker will have a whole basket full of assets that you can trade in available for you, Microsoft and many other companies have now started looking for alternative methods to maximize their business profits.

So how exactly are Microsoft and weed connected? As you may know, Microsoft has now slowly started shifting its focus from core computer based services to cloud services, which is why there are two main arms in this segment – Azure Cloud and Azure Government Cloud. Will Raghuram Rajan Continue as RBI Governor? With the global opinion suggesting offering domestic financial system with the much needed stability, the chances of Raghuram Rajan’s extension is imminent. 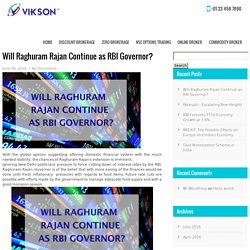 Ignoring New Delhi politicians pressure to force cutting down of interest rates by the RBI, Raghuram Rajan, Governor is of the belief that with more easing of the finances would be done until fresh inflationary pressures with regards to food items. Future rate cuts are possible with efforts made by the government to manage adequate food supply and with a good monsoon season. This September 4th, he is said to be completing his 3 year term after which there are chances of getting further extension. It is the Prime Minister and Finance Minister who would be deciding on his extension after consulting him. RBI Foresees FY16 Economy Growth at 7.4% The growth projections of the Indian economy had been kept unchanged at about 7.4% by the Reserve Bank of India for its current fiscal, which is a bit higher than the figure that World Bank had forecasted i.e. 7.3%. Raghuram Rajan, the RBI Governor had announced in the 2015-16 6th Bi-Monthly Monetary Policy Statement that the growth of the Indian economy is being pegged to quicken to about 7.6% in the coming fiscal year.

He opined that currently the Indian economy has been viewed as a stability beacon due to its steady disinflation, commitment towards fiscal rectitude and a current account deficit that is modest. Unified Bill Payments With the Help of BBPS. In a welcome move, the RBI has initiated the process of letting individuals across the country to may their multiple bills through one payment channel. The process is known as the Bharat Bill Payment System. The key features of this scheme are as follows: This scheme is open for both people who are digitally savvy and those who are not. Upon registering for this service, a person can go to the outlet of the wallet companies or banks that are registered for this scheme and make his payments. Those who do use smart phones and computers can avail the online facilities too.The RBI has approached several companies and banks to participate in this program to ensure maximum success.

Blackmoney – Rs. 50,000 Crore Worth Indirect Tax Evasion Unearthed by Government in 2 Years. According to a report from the Finance Ministry, Rs. 3,963 crore worth of smuggle goods were recovered in a crackdown made on black money in the last two years. Indirect tax evasion amounting to about Rs. 50,000 crore had been unearthed by the government including Rs. 21,000 crore worth undisclosed income during the last couple of years through series of measures undertaken.

Goods worth Rs. 3,963 crore has been seized related to smuggling activities in the last couple of years, leading to an increase of about 32% during similar period. Changes in Insolvency Resolutions. Indian president Pranab Mukherjee has recently authorised the implementation of laws pertinent to the insolvency resolutions. Not only will this law ensure timely handling of insolvency claims, it will also ensure the veracity of such claims made by both private individuals and business organizations. Whether you are an avid trader, who uses NSE options trading or director of a company, you should familiarise yourself with insolvency options and its rules. Additional Taxes Now Payable. The central government of India has from June 1st, 2016, levied an additional 0.5% tax on taxable services. It is important for all people of all income groups to know about this because there will be changes in process of many services that are used on a daily basis. Earlier, the only tax that was payable to the Central Government was the Service Tax, which as of 1st June 2016 stood at 14%.

The Government started an initiative to keep the country clean, in a large scale manner, which attracted the interest of many noted people, including sports persons and Bollywood celebrities. Prime Minister Modi was himself seen sweeping roads and lanes to promote this cause and a few months later, a tax of 0.5% was added on top of those services that already attract Service Tax. Importance of Trading Carefully in This Highly Volatile Market.