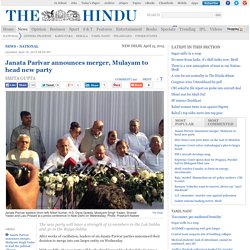 With 30 MPs, the new party will be the third largest bloc behind the Congress (68) and the BJP (47) in the Rajya Sabha, where the Modi government continues to be in a minority. In the Lok Sabha, the party will have 15 MPs, making it the eighth largest party in the House. Samajwadi Party supremo Mulayam Singh — at whose residence the leaders met — will head the party and the parliamentary board, but the name, flag, symbol, policy and party programme will be finalised by a six-member committee later. While the SP leader will head the committee, its members will be H.D. Deve Gowda (Janata Dal-S), Sharad Yadav (Janata Dal-United), Om Prakash Chautala (Indian National Lok Dal) , Kamal Morarka (Samajwadi Janata Party) and Ram Gopal Yadav (SP).

However, the fact that Mr. Net neutrality debate rages. It’s a major victory for the proponents of net neutrality and a big setback for service provider Airtel. 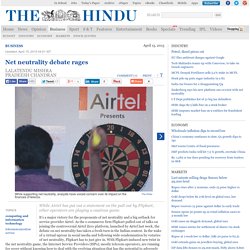 As the e-commerce firm Flipkart pulled out of talks on joining the controversial Airtel Zero platform, launched by Airtel last week, the debate on net neutrality has taken a fresh turn in the Indian context. In the wake of a virtual uproar in social media and following wide condemnation by votaries of net neutrality, Flipkart has to just give in.

With Flipkart-induced new twist in the net neutrality game, the Internet Service Providers (ISPs), mostly telecom operators, are running for cover without knowing how to deal with the evolving situation that has the potential to adversely affect their business. While Airtel has put out a statement on the pull out by Flipkart, other operators are playing a cautious game. And, they are unwilling to comment on a subject that has become an emotive issue. “We are in favour of net neutrality. No such plans: Snapdeal. Net neutrality: nuts and bolts. What’s net neutrality? 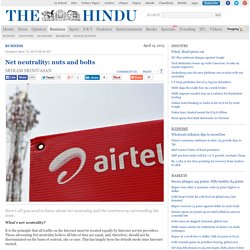 It is the principle that all traffic on the Internet must be treated equally by Internet service providers. Those advocating Net neutrality believe all bits of data are equal, and, therefore, should not be discriminated on the basis of content, site or user. This has largely been the default mode since Internet started. Why has there been so much of noise about net neutrality in recent months? First, India’s top telecom company Bharti Airtel, towards the end of last year, decided to charge subscribers extra for use of apps such as Skype and Viber. Then, Facebook brought to India internet.org, a pre-selected bouquet of Web sites offered free to subscribers of Reliance Communications. The buzz became really big after TRAI put out a 118-page consultation paper asking the public for its opinion on 20 questions, most of them about how the Internet can be regulated.

Who benefits from net neutrality? Every Internet user. New ventures benefit too. No. Land ordinance on track. The Union Cabinet on Tuesday discussed re-promulgation of the Land Acquisition Ordinance but refrained from making an official announcement on the decision taken. 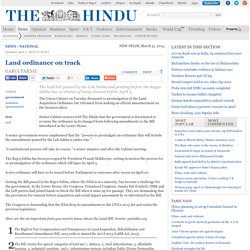 Senior Cabinet sources told The Hindu that the government is determined to re-issue the ordinance in its changed form following amendments to the Bill introduced in the Lower House. A senior government source emphasised that the “process to promulgate an ordinance that will include the amendments passed by the Lok Sabha is under way.’’ “Constitutional process will take its course,’’ a senior minister said after the Cabinet meeting. The Rajya Sabha has been prorogued by President Pranab Mukherjee, setting in motion the process for re-promulgation of the ordinance which will lapse by April 5. Middle East: Who is fighting whom? The combined offensive by Saudi Arabia and other Gulf Cooperation Council countries in Yemen is the newest front of the ongoing multi-actor power struggle in the Middle East. 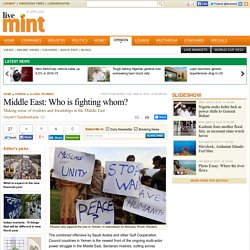 Sectarian rivalries, cutting across borders, have made the region a battleground since 2003 when Saddam Hussein was removed as Iraq’s ruler. The number of actors, state and non-state, has become so large that it is now difficult to keep track of who is for and against whom in the region. Here is a list of the major state and non-state actors with special focus on those who are engaged in civil wars in more than one country: Syria Against the backdrop of the Arab Spring, the crisis in Syria started primarily as an uprising against Bashar al Assad’s government. What started as a movement against a dictatorial regime soon became an all out civil war between different interest groups. Assad’s supporters Iran: The Shia-majority country backs Assad’s government and the Syrian army with financial and military support. Iraq. All you want to know about Solar Impulse 2- The Times of India. Solar Impulse 2, world's first solar-powered aircraft is on its journey around the world. 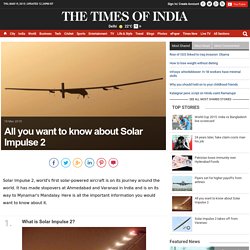 It has made stopovers at Ahmedabad and Varanasi in India and is on its way to Mynamar's Mandalay. Here is all the important information you would want to know about it. What is Solar Impulse 2? Nendran Banana gets GI tag. Kerala’s sumptuous Nendran Banana and Karnataka’s Bangalore Rose Onion have got geographical indication (GI Tag) registrations from the Geographical Indications Registry, Chennai. 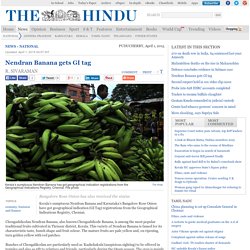 Chengazhikodan Nendran Banana, also known Chengazhikode Banana, is among the most popular traditional fruits cultivated in Thrissur district, Kerala. This variety of Nendran Banana is famed for its characteristic taste, bunch shape and fruit colour. The mature fruits are pale yellow and, on ripening, turn golden yellow with red patches. Bunches of Chengalikodan are particularly used as ‘Kazhchakula’(auspicious sighting) to be offered in temples and also as gift to relatives and friends, particularly during the Onam season.