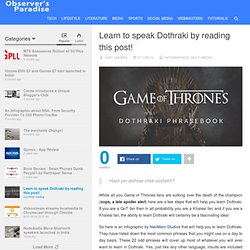 While all you Game of Thrones fans are sulking over the death of the champion (oops, a late spoiler alert) here are a few steps that will help you learn Dothraki. If you are a GoT fan then in all probability you are a Khalesi fan and if you are a Khalesi fan, the ability to learn Dothraki will certainly be a fascinating idea! So here is an infographic by NeoMam Studios that will help you to learn Dothraki. They have listed down the most common phrases that you might use on a day to day basis. These 22 odd phrases will cover up most of whatever you will ever want to learn in Dothraki. What Does it Take to Get a Job at Google?

Not so long ago, in a class at a computer science engineering school, students were asked to speak about their dream company, the company where they would like to work. 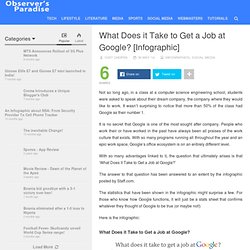 The Cost of Server Downtime [Infographic] There used to be a time when people didn’t really rely on the internet for anything. 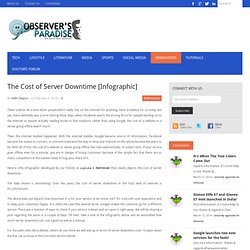 Hard to believe for us today but yes, there definitely was a time! During those days, when Facebook wasn’t the driving force for people latching on to the internet or people actually reading books to find solutions rather than using Google, the cost of a website or a server going offline wasn’t much. Then, the internet bubble happened. Joomla! vs Wordpress : Which CMS to choose?  With more than a billion websites and millions of bloggers, the online community is getting stronger by the day. 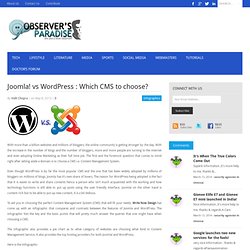 With the increase in the number of blogs and the number of bloggers, more and more people are turning to the internet and even adopting Online Marketing as their full time job. The first and the foremost question that comes to mind right after setting aside a domain is to choose a CMS i.e. Content Management System. Even though WordPress is by far the most popular CMS and the one that has been widely adopted by millions of bloggers on millions of blogs, Joomla has it’s own share of lovers.

How to pick the perfect video game? [Infographic]  Let’s face it, at some point in our lives we have had the urge to find a video game that is perfect for us, a game we would love to spend several hours each day in an attempt to reach to the end of game credits. 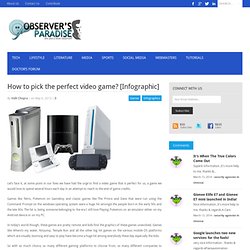 Games like Tetris, Pokemon on Gameboy and classic games like The Prince and Dave that were run using the Command Prompt on the windows operating system were a huge hit amongst the people born in the early 90s and the late 80s. The fat is, being someone belonging to the era I still love Playing Pokemon on an emulator either on my Android device or on my PC. In today’s world though, these games are pretty remote and kids find the graphics of these games unevolved.

Games like Where’s my water, Ninjump, Temple Run and all the other big hit games on the various mobile OS platforms which are visually stunning and easy to play have become a huge hit among everybody these day especially the kids. Infographics / Small business toolkit webs #infografia #infographic. 26 things you need to know before making a website!  The number of blogs that are being built are increasing daily and every other day someone or the other comes up to us saying he or she is working on a website and do we have any tips for them. 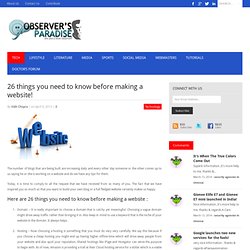 Today, it is time to comply to all the request that we have received from so many of you. The fact that we have inspired you so much so that you want to build your own blog or a full fledged website certainly makes us happy. Domain – It is really important to choose a domain that is catchy yet meaningful. Choosing a vague domain might drive away traffic rather than bringing it in. What type of iPhone user are you? - Observers Paradise  I still remember the first time Steve Jobs spoke about the concept of iPhone at MacWorld in the year 2007. 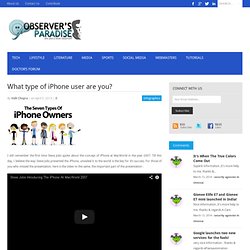 Till this day, I believe the way Steve Jobs presented the iPhone, unveiled it to the world is the key for it’s success. For those of you who missed the presentation, here is the video to the same, the important part of the presentation : Even though I certainly am an Android guy, the way software and the hardware has been so closely integrated in the iPhone making it a perfect end user smartphone makes you admire it, love it even!

Starting from 2007 Apple has launched 6 versions of the iPhone starting from iPhone first generation to iPhone 5 with iPhone 3G, iPhone 3GS, iPhone 4, iPhone 4S coming in between. Twitter Facts - The most obnoxious tweeters from the tech industry!  Twitter has around 500,250,000 active registered users with over 150,000 people joining in each day. 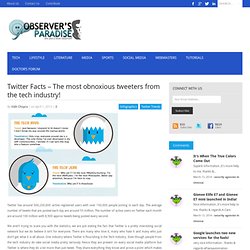 The average number of tweets that are posted each day are around 55 million. The number of active users on Twitter each month are around 100 million with 8,900 approx tweets being posted every second. 13 emerging bands from around the globe [Infographic]  The music industry has a history where have gone from nothing to superstars in a matter of days. 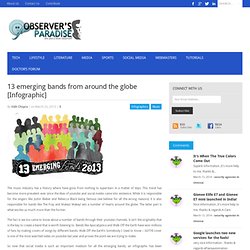 This trend has become more prevalent ever since the likes of youtube and social media came into existence. While it is responsible for the singers like Justin Bieber and Rebecca Black being famous (we believe for all the wrong reasons) it is also responsible for bands like The Fray and Wakey! Wakey! How To Use twitter - Techaholika  The evolution of Web Design  It is pretty intriguing how everything on the internet functions. 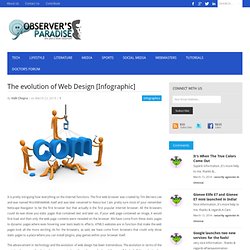 The first web browser was created by Tim Berners-Lee and was named WorldWideWeb itself and was later renamed to Nexus but I am pretty sure most of your remember Netscape Navigator to be the first browser but that actually is the first popular internet browser. All the browsers could do was show you static pages that contained text and later on, if your web page contained an image, it would first load and then only the web page contents were revealed on the browser.

We have come from these static pages to dynamic pages where even hovering over texts leads to effects. HTML5 websites are in function that make the web pages look all the more exciting. As for the browsers, as said, we have come from browsers that could only show static pages to a place where you can install plugins, play games within your browser itself. Facebook Psychology : How is it affecting our mind?  We have spoken about being addicted to social networking website many times in the past. We did go ahead to confess our tech junkie-ness in one of our posts pretty recently and finally, we stumble upon on an infographic that was an eye opener because of the certain facts that it contained. How to Go Viral with your Facebook Fan Page! Facebook Fan page have gone on to become as important as blogs these days and the simple reason for it is that people tend to check Facebook more than they spend time reading and searching for stuff online. What happens in 30 seconds on the Internet?

What would be that one thing that you are sure you can do in 30 seconds and nobody else can? Well, you might have quite a few answers to the question but there is a lot that can be done in 30 seconds when we talk in terms of seconds. To be a little more specific, A LOT can happen or rather a lot actually happens in 30 seconds on the internet.

It’s a whole world online and talking in terms of the real world, the world without internet, there isn’t much that one can do in as less as 30 seconds but 30 seconds on the Internet is good enough for performing a number of tasks. So what all happens in 30 seconds on the Internet? Well, here are a few key points that we came across in a nifty infographic: 200,000 minutes of voice call time on Skype 15 new hours of video are uploaded to YouTube 1 million search queries on Google 3 million+ Facebook views $45,000 in sales on Amazon 102 million emails sent. iPad mini vs Google Nexus 7. So finally the much awaited iPad mini was finally revealed by Apple yesterday on 23rd of October and the first obvious question that everyone had was how does it fair when compared to Google’s Nexus 7.

Even though Apple made it pretty clear at Apple’s event that the obvious competition that iPad mini has is the Google Nexus 7 as they compared their new device with Google Nexus 7 in a couple of areas visually. The Death of SEO : Something that never came true! Let’s talk about the early days when Google used to be a search engine or rather just a Search Engine, not a technology giant on the whole but just a pure search engine whose main objective was providing organic search results to the users. Google’s Search Algorithm has evolved and gotten better with time in order to provide improved results which is the reason today we more often than not find whatever we are searching for on the first page of search result, so did the SEO (Search Engine Optimization) along with it.

I don’t really understand what makes people believe that SEO is dead. Facebook Failures : Where Facebook went wrong! Facebook, as has been stated by almost every social media expert, is the biggest social networking website at the moment. With more than 500 million active users, Facebook certainly did a few if not many things that clicked amongst the users. If one thinks of Facebook’s history, the simplicity that it had to begin with was it’s charm. The Rise of Coding [Infographic] With more and more innovation in technology coming up, the life of a software engineers and coders is getting a lot more complicated and at the same time all the more interesting.

There is an increasing demand of software in every field ever since digitalisation has stepped in almost every single field. Who is faking it on twitter? Company logo and the colour logic. Logo of companies and the colour logic. How to deal with information overload? How to deal with information overload? Reasons for unfollowing people on twitter. Reasons for unfollowing people on twitter. How common is your password?Observers Paradise. Of late a number of popular websites accounts are being hacked into and a number of passwords of various user names are being leaked online.