19 year old. Author of The Fanatic Four, a poet and an 2nd year engineering student! Owner of the site Observer's Paradise

Sports. Mobile games. Music. Poems. The best of Taylor Swift. Books. Technology. Infographic. 10 places to visit before they are gone forever!Observers Paradise. We all have a ‘to visit’ list somewhere in our mind if not on paper anywhere. 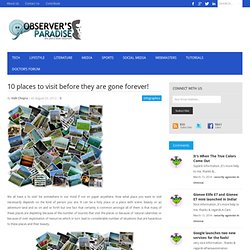 Now what place you want to visit necessarily depends on the kind of person you are. Is there anything right or wrong?Observers Paradise. The question is pretty simple but the answer certainly isn’t. 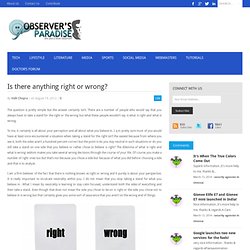 There are a number of people who would say that you always have to take a stand for the right or the wrong but what these people wouldn’t say is what is right and what is wrong. To me, it certainly is all about your perception and all about what you believe in. Adieu VVS Laxman!Observers Paradise. A few years ago, maybe five or six, people were left fretted with the thought of an Indian cricket without it’s “Fabulous Five”! 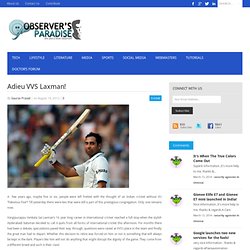 Till yesterday there were two that were still a part of this prestigious congregation. Only one remains now. Vangipurappu Venkata Sai Laxman’s 16 year long career in international cricket reached a full stop when the stylish Hyderabadi batsman decided to call it quits from all forms of international cricket this afternoon. For months there had been a debate, speculations paved their way through, questions were raised at VVS’s place in the team and finally the great man had to depart. Whether this decision to retire was forced on him or not is something that will always be kept in the dark. His career may not have be as impressive as that of Rahul Dravid when one looks at the stats but his contributions to India have been extremely vital. “Lazy Elegance”. Short Film of the Week- Right Here Right Now!Observers Paradise. Posting short films has now become popular among websites and even among urban youth. 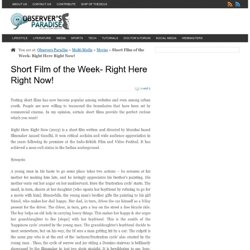 People are now willing to transcend the boundaries that have been set by commercial cinema. In my opinion, certain short films provide the perfect recluse which you want! Right Here Right Now (2003) is a short film written and directed by Mumbai based filmmaker Anand Gandhi . It won critical acclaim and wide audience appreciation in the years following its premiere at the Indo-British Film and Video Festival. It has achieved a near-cult status in the Indian underground. Synopsis: A young man in his haste to go some place takes two actions – he screams at his mother for making him late, and he lovingly appreciates his brother’s painting. Destiny : A predefined directive or a matter of choices?Observers Paradise.

Destiny : A predefined directive or a matter of choices? 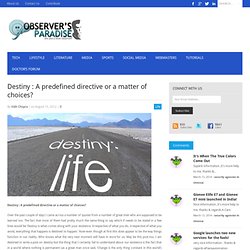 Over the past couple of days I came across a number of quotes from a number of great men who are supposed to be learned too. The fact that most of them had pretty much the same thing to say which if needs to be stated in a few lines would be ‘Destiny is what comes along with your existence. Sprinkle : App review. Platform: Android Cost: 2.99$ Review: 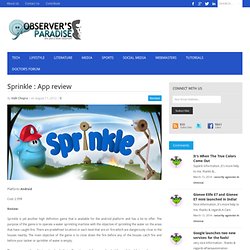 Google's Football (Soccer) at Olympics Doodle! We love Olympics and we say this not because there are so many sports to watch so many teams to support so many things to have a look at but because of Google! 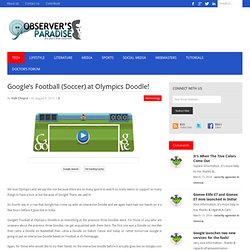 There, we said it! It’s fourth day in a row that Google has come up with an interactive Doodle and we again have had our hands on it a few hours before it goes live in India. Samsung Galaxy Note 10.1 revealed : First look and more! Samsung has brought about a revolution as far as smart phone devices are concerned and this is pretty much evident with the humungous rise in their market share! 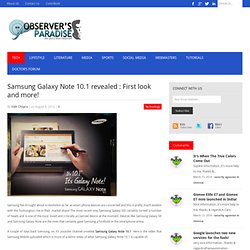 Here is the video that Samsung Mobile uploaded which is more of a demo video of what Samsung Galaxy Note 10.1 is capable of: Google Doodle : Slalom Canoe at Olympics. Google is here with yet another Doodle which will go live in a few hours in India. 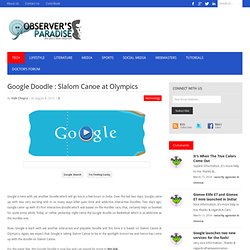 Over the last two days, Google came up with two very exciting and in so many ways killer pass time and addictive interactive Doodles. Two days ago, Google came up with it’s first interactive doodle which was based on the Hurdles race, that, certainly kept us hooked for quite some while. Today or rather yesterday night came the Google doodle on Basketball which is as addictive as the Hurdles one. Now, Google is back with yet another interactive and playable Doodle and this time it is based on Slalom Canoe at Olympics. Again, we expect that Google is taking Slalom Canoe to be in the spotlight tomorrow and hence has come up with the doodle on Slalom Canoe. Osmos HD : App Review. Name: Osmos HD Platform: Android Cost: 2.99$ Review: 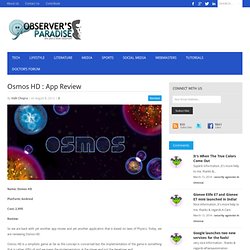 Snipping Tool : Windows 7 default screenshot tool! A post on Windows 7 when Windows has already developed a newer version of the Windows – Windows 8? Yeah, that’s exactly how I feel even when I am writing this but this one is more about a tool, the hidden treasure that Windows 7 has. For those of you who are aware of this tool, will consider this post to be old and not worth even taking a look at but as per our research out of the millions that use Windows 7 Operating System, quite a few thousands if not millions are still unaware of this tool that comes as a default tool bundled in Windows 7.

Google Doodle : Basketball. Google came up with a very interesting interactive Doodle this morning and we did give you a post regarding the same. The doodle dealt with the hurdles race which supposedly was the main event for today. Clicking on the doodle let you run the hurdles race awarding you a medal as per your timing at the end. So we did a bit of digging and stumbled upon yet another interactive doodle by Google which will go up at 00:00 hours as per Indian Standard Time but for those of you who would like to play the interactive doodle before the rest of India does, go to this link.

Google's Olympics hurdles doodle! Google has been closely following Olympics and that has been clearly portrayed by a new doodle appearing on Google’s homepage every day. The Doodle that is on display is more of the main event of the day and redirects to event’s result while displaying the total medal tally on the right corner of the screen. Today, Google has come up with an interactive doodle that allows you to run the hurdles race using your keyboard or rather three buttons of your keyboard. The left and the right arrow are to be pressed in quick succession to gain speed while the space bar is to be hit to jump when the hurdle is encountered.

After completing the race, Google even allots you a medal depending on the time you completed the hurdle race. All you have to do to play this interactive Google Doodle game is to head over to Google’s homepage and press the play button that you see as soon as the man takes his position. Microsoft Revamps Hotmail to outlook.com. Microsoft is riding high on it’s new Operating System i.e.

Windows 8 which is being loved by many who have used it so far. Windows 8 is being loved specially for it’s new Metro UI and the functionality that it provides. Olympics over the years! Infographic: The Android Story. Don't Straighten My Mess. You'll Foul Up The System! Kohli steals the show again! Authors steering towards Pulp Fiction and Chik-Lits.