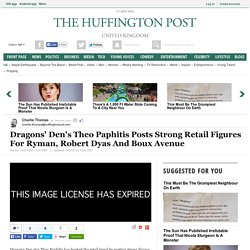 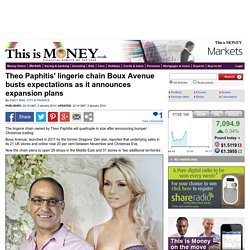 Boux Avenue, launched in 2011 by the former Dragons’ Den star, reported that underlying sales in its 21 UK stores and online rose 20 per cent between November and Christmas Eve. Now the chain plans to open 29 shops in the Middle East and 31 stores in ‘two additional territories’. Sizzling sales: Theo Paphitis launched lingerie chain Boux Avenue in 2011 During the year to March 2013, sales rose from £6.9million to £18.2million and Boux Avenue posted a £7.1million operating loss. Hardware store Robert Dyas, which Paphitis bought in 2012, made an annual profit of £4.9million with turnover up 8 per cent to £114.4million. Stationers Ryman, also owned by Paphitis, posted an operating profit of £7.1million, up £100,000, on sales up 0.8 per cent at £124.3million. UK economic growth slows to 0.3% - BBC News. The rate of economic growth halved in the three months to the end of March, official figures show, marking the slowest quarterly growth for two years. 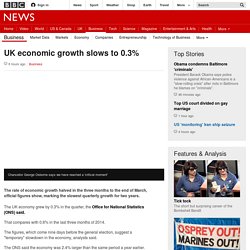 The UK economy grew by 0.3% in the quarter, the Office for National Statistics (ONS) said. That compares with 0.6% in the last three months of 2014. The figures, which come nine days before the general election, suggest a "temporary" slowdown in the economy, analysts said. The ONS said the economy was 2.4% larger than the same period a year earlier. Will HSBC really quit the UK? - BBC News. This morning HSBC has announced that it is going to look - again - at whether it would be better served by moving its headquarters out of London. 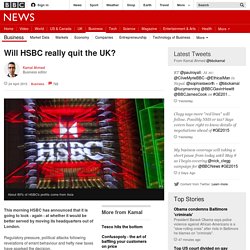 Regulatory pressure, political attacks following revelations of errant behaviour and hefty new taxes have sparked the decision. HSBC has also said that uncertainty over Britain's future in the European Union is weighing on its future as well as new rules which oblige banks to split their retail and investment banking activities - the ring-fence. The pressure to launch this review has come from the HSBC board which has been pushed by investors worried about sub-par performance. Profits are down at the bank and the share price is under-performing. If HSBC were to move - and that is a very big, costly, politically difficult if - it would be a significant moment for the City and Britain's place as the home of major global banks. Oslo City Shopping Centre. La Senza to enter administration in UK - BBC News. UK retailer La Senza has said that it intends to enter administration. 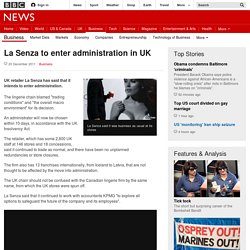 The lingerie chain blamed "trading conditions" and "the overall macro environment" for its decision. An administrator will now be chosen within 10 days, in accordance with the UK Insolvency Act. The retailer, which has some 2,600 UK staff at 146 stores and 18 concessions, said it continued to trade as normal, and there have been no unplanned redundancies or store closures. The firm also has 13 franchises internationally, from Iceland to Latvia, that are not thought to be affected by the move into administration.

The UK chain should not be confused with the Canadian lingerie firm by the same name, from which the UK stores were spun off. La Senza said that it continued to work with accountants KPMG "to explore all options to safeguard the future of the company and its employees". The firm was bought by a private equity group, Lion Capital, in 2006 and had sales last year of about £140m. Japan records first trade surplus since 2012 - BBC News. Japan has recorded its first trade surplus in three years after the weaker yen boosted exports and cheaper oil prices lowered its import bill. 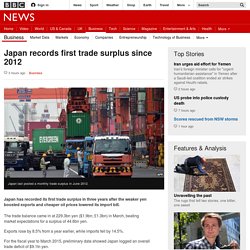 The trade balance came in at 229.3bn yen ($1.9bn; £1.3bn) in March, beating market expectations for a surplus of 44.6bn yen. Exports rose by 8.5% from a year earlier, while imports fell by 14.5%. For the fiscal year to March 2015, preliminary data showed Japan logged an overall trade deficit of $9.1tn yen. Japan's trade balance fell into the red after the March 2011 earthquake and disaster led to the closure of the country's nuclear plants.

Nuclear power used to provide about a third of Japan's energy needs. To make up for the shortfall, Japan began importing huge amounts of liquefied natural gas, coal and oil. However, a fall in commodity prices has eased the import costs. Marcel Theliant, from Capital Economics, said Japan's trade results were stronger than expected but it was unlikely to last.