Bakeware firms set for a boost as The Great British Bake Off is back on TV. By Vicki Owen, Financial Mail on Sunday Published: 21:16 GMT, 8 August 2015 | Updated: 10:43 GMT, 9 August 2015 The return of BBC1's The Great British Bake Off, which had a record ten million viewers last week, is expected to give a fresh boost to the country's small bakeware firms. 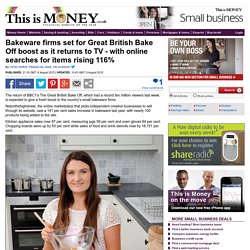 Notonthehighstreet, the online marketplace that picks independent creative businesses to sell through its website, saw a 141 per cent sales increase in bakeware last year, with nearly 100 products being added to the site. Kitchen appliance sales rose 87 per cent, measuring jugs 59 per cent and oven gloves 64 per cent. Chopping boards were up by 83 per cent while sales of food and drink stencils rose by 18,151 per cent. On the rise: Becky Broome's 'star baker' bowl is a top seller It found the number of searches for baking related items peaked on August 2 at 11,112, jumping from an average of 5,143 per day in June – a rise of 116 per cent. 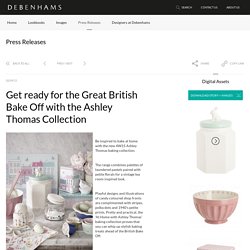 The range combines palettes of laundered pastels paired with petite florals for a vintage tea room inspired look. Playful designs and illustrations of candy coloured shop fronts are complimented with stripes, polka dots and 1940’s petite prints. Pretty and practical, the ‘At Home with Ashley Thomas’ baking collection proves that you can whip up stylish baking treats ahead of the British Bake Off. Notes to Editors: Debenhams is a leading international, multi-channel brand with a proud British heritage which trades out of 240 stores across 28 countries. Debenhams gives its customers around the world a unique, differentiated and exclusive mix of own brands, international brands and concessions. 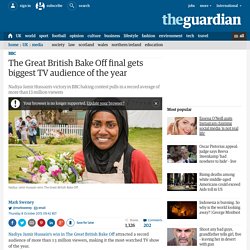 The final of the baking show drew an average of 13.4 million and a five-minute peak of 14.5 million on Wednesday, beating last year’s audience and the final of Britain’s Got Talent as the biggest show of 2015 to date. The BBC said the show had the highest viewing figures since the World Cup final in July last year, which was watched by almost 15 million people on BBC1. Excluding sport it was the most watched programme since coverage of the Queen’s Diamond Jubilee in June 2012. The mother of three from Leeds, who became the sixth and arguably most popular winner of the hit baking show, admitted that if it wasn’t for her husband she wouldn’t have applied to enter the contest. “Those were famous last words. Hussain beat Ian Cumming and Tamal Ray in an emotional cook-off that smashed viewing records. 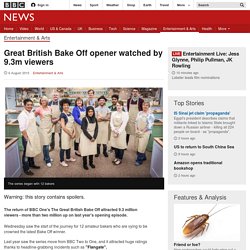 Wednesday saw the start of the journey for 12 amateur bakers who are vying to be crowned the latest Bake Off winner. Last year saw the series move from BBC Two to One, and it attracted huge ratings thanks to headline-grabbing incidents such as "Flangate". A record 12.3 million viewers watched Nancy Birtwhistle win the final. The opening episode in 2014 was watched by 7.2 million people, while the previous year's premiere was seen by 5.6 million. Last night 43% of all TV viewers were watching Bake Off, with a peak viewing figure of 10 million at 20:50 BST.

The series premiere saw musician Stuart Henshall become the first contestant to leave, as his Madeira sponge, walnut cake and Black Forest gateau failed to impress judges Mary Berry and Paul Hollywood. Great British Bake Off fuels 62% leap in sales of baking goods since 2007. Prices of baking items have risen significantly since 2007 - but sales volumes have surged nonethelessPrices appear to fall just after the Great British Bake Off finaleSales of manufactured cakes are falling as increasing numbers start to make their own By Rachel Rickard Straus for Thisismoney.co.uk Published: 11:07 GMT, 2 September 2014 | Updated: 07:52 GMT, 3 September 2014. 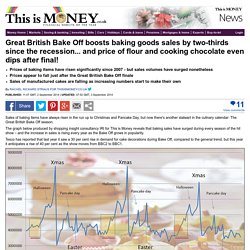 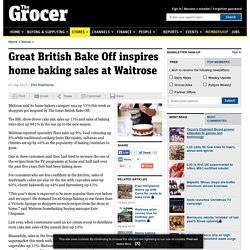 The BBC show drove cake mix sales up 13% and sales of baking trays shot up 881% in the run up to the new season. Waitrose reported speciality flour sales up 9%, food colouring up 8% while traditional cooking fruits like raisins, sultanas and cherries are up by 46% as the popularity of baking continues to grow.