Potential Goldmine: Branded Artist Apps Could Make Money and Please Fans. Wahwah.fm already lets you turn the MP3s on your iPhone into a radio station. 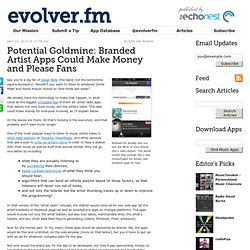 This would evolve that concept into a real moneymaker for artists, and excellent apps for fans. Say you’re a big fan of Sleigh Bells (the band, not the wintertime equine accessory). Wouldn’t you want to listen to whatever Derek Miller and Alexis Krauss rocked on their iPods last week? We already have the technology to make that happen, in what could be the biggest Untapped App of them all: artist radio apps that deliver not only their music, but the artist’s taste. This idea could make money for everyone involved, as I’ll explain below. All the pieces are there. One of the most popular ways to listen to music online today is artist radio stations on Pandora, iHeartRadio, and other services that ask a user to enter an artist’s name in order to hear a station with their music as well as stuff that sounds similar.

Now for the money part. But what about copyright? Like many ideas, this one gets easier with scale. Why Drop 50K? Artists, Labels Build Their Own Apps For Less. Just because Madonna can afford to spend $50,000 to develop an iPhone app doesn't mean she wants to. 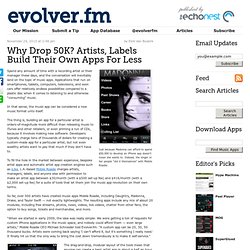 Instead, the singer or her people "did it themselves" with Mobile Roadie. Spend any amount of time with a recording artist or their manager these days, and the conversation will inevitably land on the topic of music apps. Applications that run on smartphones, tablets, computers, televisions, and soon cars offer relatively endless possibilities compared to a plastic disc when it comes to listening to and otherwise “consuming” music. In that sense, the music app can be considered a new music format unto itself.

The thing is, building an app for a particular artist is orders-of-magnitude more difficult than releasing music to iTunes and other retailers, or even printing a run of CDs, because it involves making new software. To fill the hole in the market between expensive, bespoke artist apps and automatic artist app creation engines such as iLike, L.A. The Top 50 Hottest Black Porn Stars Of All Time. Global Grind. Sting may ditch albums for apps. Synchronicity … Sting hails the app as the new model for releasing music. Photograph: Jeffrey Ufberg/FilmMagic Sting has said he may never release another album, preferring the "new model" of iOS apps. As the singer celebrates his 60th birthday, he has hailed the possibilities of his new Sting 25 app.

"People are going to stop buying CDs," Sting told Billboard. "People are going to stop selling and making them, so I am looking for different ways to get music to people, and the [app] at the moment seems to be the favourite … The app is the new model. " His first venture into the world of apps is Sting 25, released this week. Sting's other current project is just as far removed from the old-fashioned album. Sting hopes to send The Last Ship on tour, "[hitting] the road in a year's time".

"It takes up most of my waking life," he said, "and a lot of my dream life. " When Yasiin Bey was force-fed Guantánamo Bay-style – eyewitness account. Yasiin Bey, formerly known as Mos Def, had agreed to submit his body and fame to a form of torture. The body bit would involve being chained to a feeding chair while doctors inserted more than a metre of rubber tubing up his nose, down his throat and into his stomach. His fame would hopefully draw attention to that fact that this is happening daily to 45 hunger strikers in Guantánamo Bay. Reprieve has always been well aware that in its fight against human rights abuses there is no substitute for the court of public opinion. Clive Stafford Smith, the organisation's founder, is often the first to volunteer himself for some sort of extreme treatment but, in his words, "nobody has the faintest clue who I am".

Which was why I had agreed to ask Bey. We met at his hotel. Having volunteered to fast that day, Bey was tired and by now it was late. She read from the account of Samir Mokbel, who said to his lawyers: "I will never forget the first time they passed the feeding tube up my nose.