How to make successful Mobile App. If there was one thing that saw growth even during the worst of the times, it has been a mobile app business. 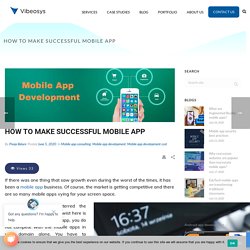 Mobile App development cost planning is a task in itself. 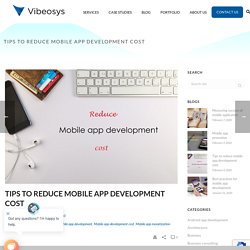 It has a lot of technical as well as strategic components involved in the whole process. What sets it apart however is the fact that if unchecked or done in an unplanned manner, the entire budget could go immensely overboard. The reason is simple, there are just so many parameters one could improve upon for better user experience. Plus, the competition is so huge that app makers usually lose focus on what is the most important feature and end up including a lot of side features too, just to make sure that the user stays. While it might sound like a good idea yet, it isn’t half as good because the budget overshoots soon. Also, it isn’t uncommon but most of the firms who go for mobile app development are either early-stage startups or small and medium businesses.

This blog addresses the latter i.e. what should one do in order to reduce their mobile app development cost. Mistake 1. Also, the testing bit! Mistake 2. Mistake 3. Mobile app promotion - promoting mobile apps. We have in our previous blogs talked about how the go to market strategy forms a major chunk of ensuring that your mobile app turns out to be a success. 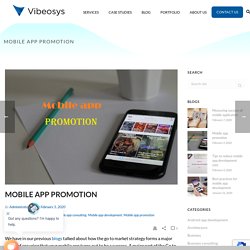 A major part of the Go to market (GTM) strategy is the promotional aspect of it. Now, mobile app promotion doesn’t have to be necessarily about spending money. There are multiple organic ways of promoting mobile apps too. In this blog, we will discuss the various monetary as well as organic promotional methods. At Vibeosys Software, we have worked with a lot of small and medium businesses and startups. So, here we go! Measuring success of mobile application. Now, since you are on this article, we are assuming that you have already had your mobile app launched and are looking at making some sense out of what would define the success of your mobile app. 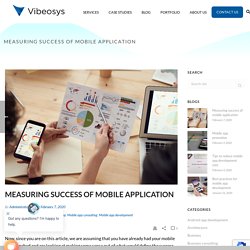 While we would definitely help you out with the important metrics to look at, let us first tell you a bit about mobile app analytics. Measuring mobile app success has never been so easy with ready made analytics. Understand Mobile App Analytics and The Use of Tools! Well, honestly if you are using the basic analytics of your store, there wouldn’t be much to talk about. But, then the information that free analytics platform would provide will be limited too. A step further in this direction goes in the form of analytics tools which provide Artificial Intelligence based solutions. Finally, there are other tools as well which can give you plethora of information on in-app analytics, which button to be made into what, the kind of colours to be used, etc etc. 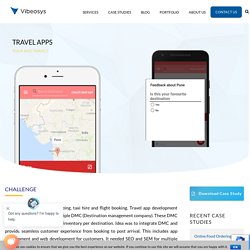 Travel app development includes integration with multiple DMC (Destination management company). These DMC will provide destinations and inventory per destination. Idea was to integrate DMC and provide seamless customer experience from booking to post arrival. Mobile app development. One of such idea was recently transformed to reality by our team. 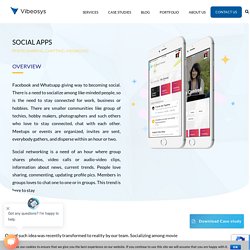 Socializing among movie goers, hobby makers, players, students has been the part of app and website. When we started discussing about the requirements, it was in concept phase. We discussed, brainstormed it, again discussed and then worked on ideation of the concept. We guided client about social networking and its unwritten rules. The idea was to create smaller communities who share same hobbies. The requirement was to create Hyperlocal community group among people sharing same hobby. On demand delivery apps. Restaurant mangement system. Mobile app and web development case studies. 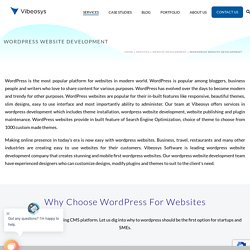 WordPress is popular among bloggers, business people and writers who love to share content for various purposes. WordPress has evolved over the days to become modern and trendy for other purposes. WordPress websites are popular for their in-built features like responsive, beautiful themes, slim designs, easy to use interface and most importantly ability to administer. Our team at Vibeosys offers services in wordpress development which includes theme installation, wordpress website development, website publishing and plugin maintenance. WordPress websites provide in built feature of Search Engine Optimization, choice of theme to choose from 1000 custom made themes. Making online presence in today’s era is now easy with wordpress websites. 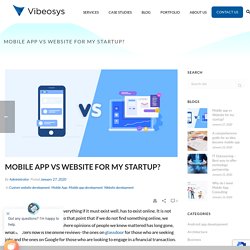 It is not surprising that we have come to that point that if we do not find something online, we cannot really trust it. The era where opinions of people we knew mattered has long gone, what matters now is the online reviews- the ones on glassdoor for those who are seeking jobs and the ones on Google for those who are looking to engage in a financial transaction.

In such times, it is only obvious that one needs to maintain their online presence and manage it well too. The very first step towards managing online presence comes in the form of a website because that is where all the users go. Vibeosys Software Services. Comprehensive guide for an idea to become mobile app. One usually tends to have a feeling that getting a mobile app installed on the phone of the user and then making it a success is all about a good app idea. 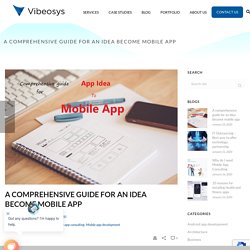 Well, that is true but not entirely because there are a plethora of things involved. What starts with just an idea has to be very efficiently executed to make a fully operational app. While there are multiple steps that the entire app making goes through, the things do not end there. Once the app is made, testing begins, post the testing and once the team is convinced that the app is good enough, it is launched. Now, one would say that basic marketing should be enough but unlike Google’s world of SEO and PPC, app marketing is a different ball game altogether. What we want to say here, in short, is that taking an app idea and converting into a business idea isn’t easy, but it isn’t impossible either. Why This Blog. Mobile app development. Consulting apps - NeXT Gen consulting. Let us start this blog with an “If”. 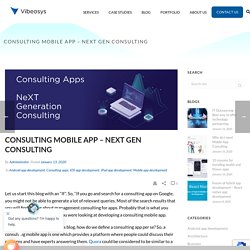 So, “If you go and search for a consulting app on Google, you might not be able to generate a lot of relevant queries. Most of the search results that you will find will be about management consulting for apps. Probably that is what you wanted to know or probably you were looking at developing a consulting mobile app. Consulting apps - NeXT Gen consulting. IT Outsourcing - Best way to offer technology partnership. Let us start with describing what IT outsourcing is: IT outsourcing is the practise whereby a firm hires resources outside of its own payroll in order to handle certain technology verticals. IT outsourcing is usually done when either the firm is looking at starting a new vertical and wants to have experts for it without having to invest in hiring.

Cost Control Reduced Operational costs. 10 reasons for installing health and fitness apps. Most of us have one common resolution for the New Year. Not to be surprised but it is usually about us being fit for the rest of the year. A lot of us hit gyms, some overenthusiastic ones even take the year long membership because it would make more sense in the long run. Why do I need Mobile App Consulting. We had, in one of our previous blogs, talked about how mobile apps have a lot of importance for businesses. They not just provide ease to the users but also allow the businesses to touch the millions of customers they couldn’t have touched otherwise.

In addition to this, a mobile app can become a source of additional revenue too. This additional revenue could be generated through either displaying ads on the app or through in app purchases. These are however, the benefits one could look at after a successful development and market implementation of the app. But, how about reaching that step? Android app development. Mobile app development process can be simplified in four different steps. First step being mobile app designs; User Interface designs carry 60% value of the total app development. Apps having similar business will be only differentiated based on easy to use user interface. Benefits of iOS app development. Each year, as the world takes on to begin on a happier and more positive note, Apple sets the tone for the entire year to come. They, in a way tell a story to make sure that what started positive ends on a positive note too. And this is done in the form of the business stats they release every year in January.

The stats are basic but very powerful because each year, Apple establishes that how it is the most profitable business every and how if one needs to be successful, they have to be using iOS or associating with it in some way. For instance, in the beginning of 2019, Apple had 2.2 million apps in its app store with about 2500 apps being launched daily. The revenue generated out of these within the first two quarters itself was about $26 bn, approximately 180% of what Playstore earned. React native app development - future of hybrid apps. We have, in one of our earlier blog established the importance of mobile app developments for a business. Indeed, the digital world has seen quite a surge in app development and while the initial focus was on developing apps specific to the OS using the coding language specific to them, it has now shifted to hybrid app development. This is because with mobile apps being so much in demand, the efforts are getting focussed towards shorter development and quicker deployment times across all platforms.

With myriad devices now being used by people across, a hybrid app sits on the crossroads of good user experience & easy deployment across all platforms. Such an app can be developed using the existing technologies such as JavaScript or HTML5 and CSS. 10 Advantages of social networking mobile app. In the era of social networking mobile apps like Facebook, Whatsapp, and Instagrams of the world, it goes without saying that social networking is a thing which has become the world, which defines the world, which defines the lives that people live. Best guide to make an online food ordering app. Mobile apps and Web development specialists. 10 Points to choose between Android and iOS app development.

20 Point take away about Android app development. Mobile app development holds its own significance given the fact that an app unlike a website exists on a phone- the place where people spend over 63% of their time. Now, close to 85% of the users across the world use Android as a platform in their smartphones.