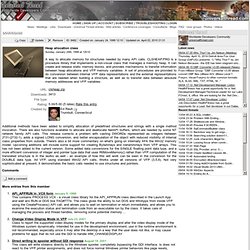 There are also functions available to allocate and deallocate NetAPI buffers, which are needed by some NT network family API calls. This release corrects a problem with casting DWORDs represented as integers between 2^31-(2^32-1), adds a signed LONG conversion, and better encapsulation of the object with reduced visibility of internal class properties from outside. There's also a bit more commentary on what's going on internally AFA the Win32 memory model. Upcoming additions will include some support for creating ByteArrays and VariantArrays from VFP arrays. Comments More entries from this member API_APPRUN in .VCX form January 5, 1999This contains PROCESS.VCX - a visual class library for the API_APPRUN class described in the Launch App and wait w/o RUN or DOS box FAQ#7774. FoxBarcode. FoxyPreviewer. VFPX - Release: ThemedControls. Visual FoxPro : Using Win32 (WinAPI) Functions.

Set ShowWindow property of the form to 2 (top-level form). 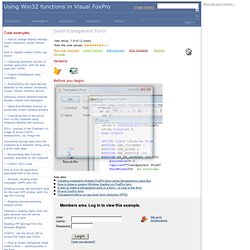 In more accurate words, WS_EX_LAYERED extended style cannot be used for child windows, as stated in Window Features aticle on MSDN. Hit testing of a layered window is based on the shape and transparency of the window. This means that the areas of the window that are color-keyed or whose alpha value is zero will let the mouse messages through. However, if the layered window has the WS_EX_TRANSPARENT extended window style, the shape of the layered window will be ignored and the mouse events will be passed to other windows underneath the layered window. See also: Creating irregularly shaped FoxPro form using transparency color keyHow to draw a custom Window Caption on FoxPro formA way to make a transparent area in a form -- a hole in the formRound FoxPro formTransparent Menu on top-level form (requires VFP9) Visual FoxPro : Using Win32 (WinAPI) Functions. Transparency settings (crKey and bAlpha parameters in SetLayeredWindowAttributes call) should be carefully picked to ensure menu readability. 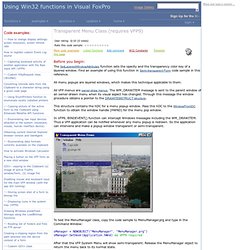 VFPX. GDIPlusX is a set of Visual FoxPro 9.0 class libraries that wrap the 603 GDI+ Flat API functions of GDIPlus.dll. 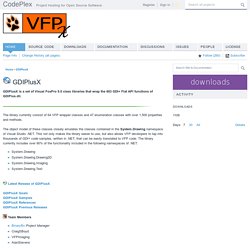 The library currently consist of 64 VFP wrapper classes and 47 enumeration classes with over 1,500 properties and methods. The object model of these classes closely emulates the classes contained in the System.Drawing namespace of Visual Studio .NET. This not only makes the library easier to use, but also allows VFP developers to tap into thousands of GDI+ code samples, written in .NET, that can be easily translated to VFP code. The library currently includes over 90% of the functionality included in the following namespaces of .NET: System.Drawing System.Drawing.Drawing2D System.Drawing.Imaging System.Drawing.Text Latest Release of GDIPlusX GDIPlusX GoalsGDIPlusX SamplesGDIPlusX ReferencesGDIPlusX Previous Releases Team Members If you would like to be involved in the project, please contact the project manager.