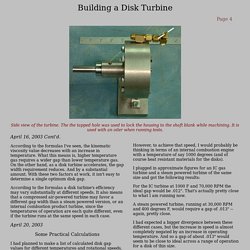 According to the formulas I've seen, the kinematic viscosity value decreases with an increase in temperature. What this means is, higher temperature gas requires a wider gap than lower temperature gas. On the other hand, as a disk turbine accelerates, the gap width requirement reduces. And by a substantial amount. With these two factors at work, it isn't easy to determine a single optimum disk gap. Tesla Turbine - Three Key Efficiency Points.

Written by Phoenix Navigation According to Nikola Tesla, the Three key efficiency points of his turbine are: the inlet nozzledisk geometrythe outlet nozzle Disk Geometry Disk geometry is a simple matter of using the right material with the right spacing and the right number position of spacers, or sandwiched elements. 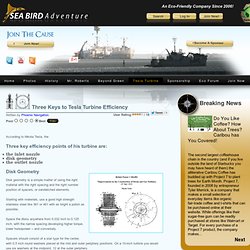 Starting with materials, use a good high strength stainless steel like 361 or 461 with as bright a polish as possible. Space the disks anywhere from 0.032 inch to 0.125 inch, with the narrow spacing developing higher torque, lower horsepower -- and conversely. Spacers should consist of a star type for the center, with 0.5 inch round washers placed at the mid and outer periphery positions. Having a bit of Trouble with Tesla Turbine [Archive] - The Home Shop Machinist & Machinist's Workshop Magazine's BBS. Ah yes, welcome to the exciting and challenging world of the Tesla turbine. 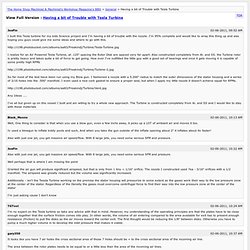 :D At a quick glance the Tesla turbine is a deceptively simple device, an engine with only one moving part. How difficult can that be to make? Well that is until you try to build one. Of course many have built turbines that worked, however the real trick is to not only make it run, but run efficiently! If you wanted to build a standard gas engine you could go to a library and look up all the design information you need with Tesla turbine you will find that there is precious little really good design data available. Compressible flow. Compressible flow is the area of fluid mechanics that deals with fluids in which the fluid density varies significantly in response to a change in pressure. 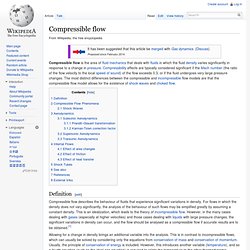 Compressibility effects are typically considered significant if the Mach number (the ratio of the flow velocity to the local speed of sound) of the flow exceeds 0.3, or if the fluid undergoes very large pressure changes. The most distinct differences between the compressible and incompressible flow models are that the compressible flow model allows for the existence of shock waves and choked flow. Definition[edit] Boundary Layer (Tesla) Turbine Page. The Tesla Boundary Layer Turbine Well...it sure does spin fast...real fast! 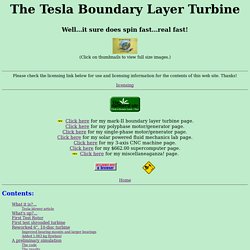 (Click on thumbnails to view full size images.) Please check the licensing link below for use and licensing information for the contents of this web site. Thanks! Licensing Click here for my mark-II boundary layer turbine page. Click here for my miscellaneaganza! Home Contents: What it is?... What it is?... Well...an article about a Tesla blower from the September 1955 issue of Popular Science provided below will help give you a notion of that. Now, sorry to disappoint you zero-point energy, perpetual motion machine, alternative energy source suppression conspiracy theorist, true-believer type folks. The Tesla boundary layer turbine is just that.

In operation, a Tesla turbine is simply a turbomachine which is reasonably efficient at a fairly high rotational speed, (dependent on several factors, including gap between the discs and disc diameter), but not too efficient to get moving. What's up?... FLYING STEAM ENGINES 7. FLYING STEAM ENGINES - Generation the Steam Conventional boilers ln their simplest form a boiler is a round tank of water with a fire underneath and in the case of my first engine (designed in 1967 by David Parker) it is little more than that. 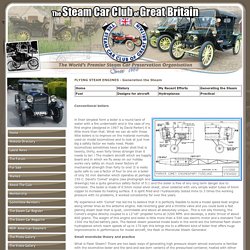 What we can do with these little boilers is to improve on the material normally used on model locomotives and to look at just how big a safety factor we really need. Model locomotives sometimes have a boiler shell that is twenty, thirty, even forty times stronger than it needs to be! ! My experience with 'Comet' has led me to believe that it is perfectly feasible to build a model speed boat engine along similar lines as the airborne engine. De Laval nozzle. Diagram of a de Laval nozzle, showing approximate flow velocity (v), together with the effect on temperature (T) and pressure (p) A de Laval nozzle (or convergent-divergent nozzle, CD nozzle or con-di nozzle) is a tube that is pinched in the middle, making a carefully balanced, asymmetric hourglass-shape. 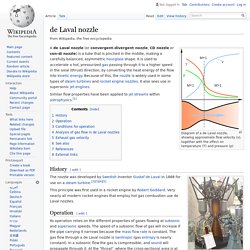 It is used to accelerate a hot, pressurized gas passing through it to a higher speed in the axial (thrust) direction, by converting the heat energy of the flow into kinetic energy. Because of this, the nozzle is widely used in some types of steam turbines, and rocket engine nozzles. It also sees use in supersonic jet engines. History[edit] The nozzle was developed by Swedish inventor Gustaf de Laval in 1888 for use on a steam turbine.[2][3][4][5] Operation[edit] Its operation relies on the different properties of gases flowing at subsonic and supersonic speeds. Conditions for operation[edit] Analysis of gas flow in de Laval nozzles[edit] HeatEnginesVol 2 Chapter 8 RS.