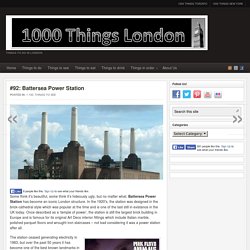 In the 1920′s, the station was designed in the brick-cathedral style which was popular at the time and is one of the last still in existance in the UK today. Once described as a ‘temple of power’, the station is still the largest brick building in Europe and is famous for its original Art Deco interior fittings which include Italian marble, polished parquet floors and wrought iron staircases – not bad considering it was a power station after all.

Pink Floyd’s Animals Album Cover The station ceased generating electricity in 1983, but over the past 50 years it has become one of the best known landmarks in London and is now Grade II listed. However, the building’s condition is described as ‘very bad’ and is included in the ‘Building at Risk Register’ by the English Heritage. The Art Deco interior – Photographer Peter Dazeley Be Sociable, Share! Battersea Power Station. The station is one of the largest brick buildings in the world[3] and is notable for its original, lavish Art Deco interior fittings and decor.[4] The building has remained largely unused since its closure and the condition of the structure has been described as "very bad" by English Heritage, which included it in its Heritage at Risk Register.[5] The site was also listed on the 2004 World Monuments Watch by the World Monuments Fund.[6] Since the station's closure numerous redevelopment plans were drawn up from successive site owners. 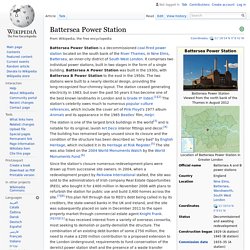 History[edit] Until the late 1930s electricity was supplied by municipal undertakings. These were small power companies that built power stations dedicated to a single industry or group of factories, and sold any excess electricity to the public. These companies used widely differing standards of voltage and frequency. BIG Unveils Design For Battersea Power Station Square. BIG has unveiled the design for their addition to the development at Battersea Power Station, a public square that will link the power station itself with the Electric Boulevard development designed by Norman Foster and Frank Gehry. 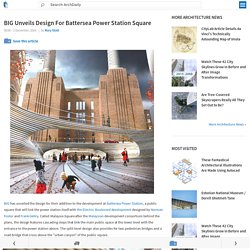 Called Malaysia Square after the Malaysian development consortium behind the plans, the design features cascading steps that link the main public space at the lower level with the entrance to the power station above. The split-level design also provides for two pedestrian bridges and a road bridge that cross above the "urban canyon" of the public square. How the new Battersea Power Station development will look. Bjarke Ingels could turn Battersea Power Station into Tesla coils. Architect Bjarke Ingels has unveiled plans to turn the chimneys at Battersea Power Station in London into giant sparking Tesla coils, powered by pedestrians passing through a public square beside the historic building. 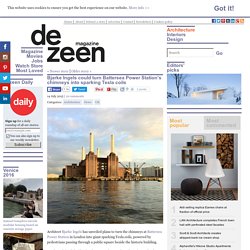 Ingels explained the idea in a lecture at the Royal Academy in London last night, where he delivered the annual architecture lecture. "We're working with experts in Tesla coils, looking into how to incorporate it into the chimneys so essentially we might celebrate the transformation from carbon footprint to human footprint," said Ingels, showing images and a movie of an electric arc passing between two of the 1933 power station's 100-metre-high chimneys.

"We imagine it like Big Ben, when the clock strikes the hour, we can have this celebration of human energy and human life," he said. Ingels' architecture studio BIG has been commissioned to design a public piazza beside the decommissioned Art Deco structure, which is at the centre of a huge redevelopment project. 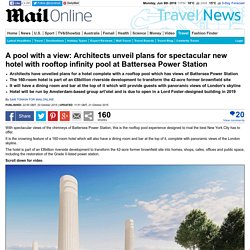 It is the crowning feature of a 160-room hotel which will also have a dining room and bar at the top of it, complete with panoramic views of the London skyline. The hotel is part of an £8billion riverside development to transform the 42-acre former brownfield site into homes, shops, cafes, offices and public space, including the restoration of the Grade II-listed power station. Scroll down for video.