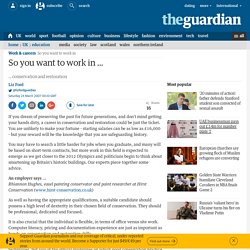 You are unlikely to make your fortune - starting salaries can be as low as £16,000 - but your reward will be the knowledge that you are safeguarding history. You may have to search a little harder for jobs when you graduate, and many will be based on short-term contracts, but more work in this field is expected to emerge as we get closer to the 2012 Olympics and politicians begin to think about smartening up Britain's historic buildings. Our experts piece together some advice. An employer says ...Rhiannon Hughes, easel painting conservator and paint researcher at Hirst Conservation (www.hirst-conservation.co.uk) As well as having the appropriate qualifications, a suitable candidate should possess a high level of dexterity in their chosen field of conservation. I've now got a permanent job at the museum. Rome won't be rebuilt in a day: the challenge of city centre restoration. As the metal lift climbs up the side of Rome’s Colosseum, a remarkable view unfolds: the unmistakable dome of St Peter’s Basilica in the distance, interrupted by the Eternal City’s Roman Forum and countless churches. 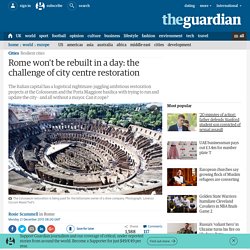 Down below, in stark contrast to the historic skyline, endless choking traffic roars past the ancient amphitheatre. Scooter riders dodge potholes, while pedestrians lament the state of the metro and the lateness of the buses. Claudio Parisi Presicce, the city’s superintendent for cultural heritage, admits that one of the city’s most important challenges is mobility. Rome currently has just two metro lines, grossly inadequate for a city of 3.7 million people. But for Presicce there is a further concern: digging underground puts the ancient city at risk. “Until a few years ago, the ancient city wasn’t well integrated with the modern city,” he says. As Romans’ bloodlust subsided, the ancient amphitheatre began to crumble, and in recent years its whitish stone has darkened. Darling Quarter in Sydney wins top Asia Pacific region landscape architects award. Copenhagen's South Harbor School rises from the sidewalk to promote community.

Copenhagen's sprawling South Harbor School encourages social social interaction in a way that is both surprising and exciting. 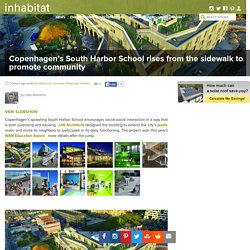 JJW Architects designed the building to extend the city's public realm and invite its neighbors to participate in its daily functioning. The project won this year's WAN Education Award - more details after the jump. MVRDV to transform a shopping mall into a lush lagoon and beach in Taiwan. The historic heart of Taiwan will soon have more to offer than delicious food and rich cultural heritage. 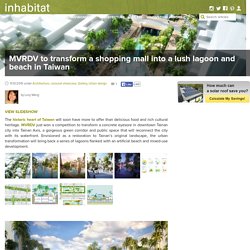 MVRDV just won a competition to transform a concrete eyesore in downtown Tainan city into Tainan Axis, a gorgeous green corridor and public space that will reconnect the city with its waterfront. Envisioned as a restoration to Tainan’s original landscape, the urban transformation will bring back a series of lagoons flanked with an artificial beach and mixed-use development. MVRDV won the bid for the transformation of the Tainan Axis together with The Urbanist Collaborative and LLJ Architects.

Located along Haian Road, the project will replace the deteriorated China-Town Mall that was built next to a canal in 1983. Before and after: historic buildings restored and transformed. Restaurant To Perch Atop Restored Dineen Building. Toronto's constantly changing cityscape has seen the comings and goings of many landmarks in the recent past. 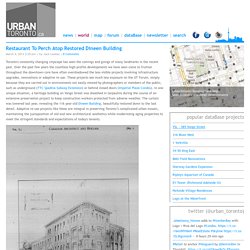 Over the past few years the countless high-profile developments we have seen come to fruition throughout the downtown core have often overshadowed the less-visible projects involving infrastructure upgrades, renovations or adaptive re-use. These projects see much less exposure on the UT Forum, simply because they are carried out in environments not easily viewed by photographers or members of the public, such as underground (TTC Spadina Subway Extension) or behind closed doors (Imperial Plaza Condos). In one unique situation, a heritage building on Yonge Street was sheathed in tarpaulins during the course of an extensive preservation project to keep construction workers protected from adverse weather.

The curtain was lowered last year, revealing the 116 year-old Dineen Building, beautifully restored down to the last detail. Home Design Minimalist: Restoration of 19th century Commercial Residential Building; 1247 Wisconsin Ave. This building design is one of the most challenging building types, beautifully arranged on a dense urban site. 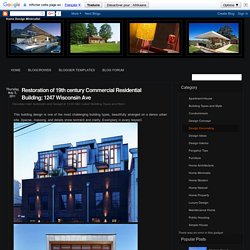 Spaces, massing, and details show restraint and clarity. Exemplary in every respect. Situated on historic Georgetown’s main shopping street, this project restores two mid-19th-century commercial/residential buildings and fills the remaining site behind them with additional street-level retail space on the street level. Above this new space and in the upper levels of the historic buildings, six luxury residential units create a little rooftop village floating above the bustle of the city. Location: Washington, D.C.