Detecting viruses: the plaque assay. One of the most important procedures in virology is measuring the virus titer – the concentration of viruses in a sample. 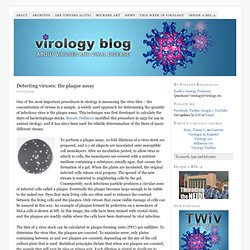 A widely used approach for determining the quantity of infectious virus is the plaque assay. This technique was first developed to calculate the titers of bacteriophage stocks. Renato Dulbecco modified this procedure in 1952 for use in animal virology, and it has since been used for reliable determination of the titers of many different viruses. To perform a plaque assay, 10-fold dilutions of a virus stock are prepared, and 0.1 ml aliquots are inoculated onto susceptible cell monolayers. After an incubation period, to allow virus to attach to cells, the monolayers are covered with a nutrient medium containing a substance, usually agar, that causes the formation of a gel. The titer of a virus stock can be calculated in plaque-forming units (PFU) per milliliter.

Dulbecco, R., & Vogt, M. (1953). Tagged as: agar, pfu, plaque assay, renato dulbecco, viral, virology, virus. Molecules of HIV. Note: this site last updated in 2006 HIV infection in a cell can lead to the formation of "syncytia", which is when cells fuse together to form large cells with many nuclei. 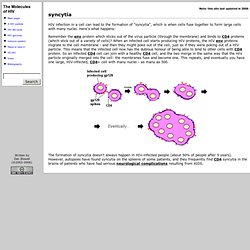 Here's what happens: Remember the env protein which sticks out of the virus particle (through the membrane) and binds to CD4 proteins (which stick out of a variety of cells)? When an infected cell starts producing HIV proteins, the HIV env proteins migrate to the cell membrane - and then they might poke out of the cell, just as if they were poking out of a HIV particle. This means that the infected cell now has the dubious honour of being able to bind to other cells with CD4 protein. ViralZone: Adenoviridae. Adaptive immune response inhibition The adenovirus E19 protein downregulates cell-surface expression of MHC I by binding and retains the heavy chain in ER. 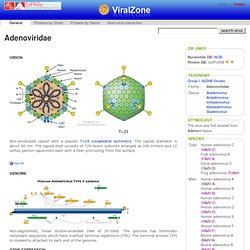 E19 binds TAP and acts as a tapasin inhibitor, preventing class I/TAP association Apoptosis modulation Soon after infection, the expression of E1A protein drives the cell cycle into S-phase so that the virus can replicate its genome optimally . Autophagy modulation Autophagy is triggered after adenoviral infection and may facilitate viral replication and/or cell lysis. Cell-cycle modulation. The failed HIV Merck vaccine study: a step back or a launching point for future vaccine development? Published January 14, 2008 // JEM vol. 205 no. 1 7-12 The Rockefeller University Press, doi: 10.1084/jem.20072681 © 2008 Rockefeller University Press Commentary Back to TopAbstract The world of human immunodeficiency virus (HIV) vaccines has suffered a baffling setback. 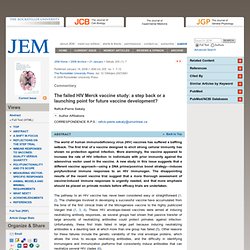 The first trial of a vaccine designed to elicit strong cellular immunity has shown no protection against infection. The pathway to an HIV vaccine has never been considered easy or straightforward (1, 2). Back to TopA shift in focus In light of the difficulties in eliciting neutralizing antibodies, the field has switched its focus away from vaccines that induce sterilizing immunity (still the ultimate goal) toward those that control viral load after infection and thus reduce secondary transmission (7–11). One approach to generating robust T cell responses is to express HIV antigens in replication-defective recombinant adenoviral vaccines (16). 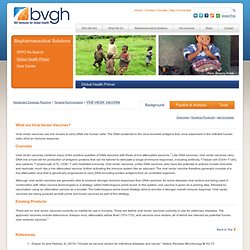 Viral vector vaccines use live viruses to carry DNA into human cells. The DNA contained in the virus encodes antigens that, once expressed in the infected human cells, elicit an immune response. Overview Viral vector vaccines combine many of the positive qualities of DNA vaccines with those of live attenuated vaccines.1 Like DNA vaccines, viral vector vaccines carry DNA into a host cell for production of antigenic proteins that can be tailored to stimulate a range of immune responses, including antibody, T helper cell (CD4+ T cell), and cytotoxic T lymphocyte (CTL, CD8+ T cell) mediated immunity.

Viral vector vaccines, unlike DNA vaccines, also have the potential to actively invade host cells and replicate, much like a live attenuated vaccine, further activating the immune system like an adjuvant. Existing Products There are no viral vector vaccines currently on market for use in humans. Back to Top References Get Involved.