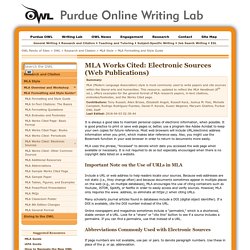 It is always a good idea to maintain personal copies of electronic information, when possible. Important Note on the Use of URLs in MLA MLA no longer requires the use of URLs in MLA citations. Aristotle. Eye Tracking and Gaze Based Interaction Everywhere: SMI Launches Mini OEM Eye Tracker. Tobii Technology AB; Patent Issued for Eye-Tracking Using a GPU. Gaze input for mobile devices by dwell and gestures. Gliding and saccadic gaze gesture recognition in real time. Eye movements can be consciously controlled by humans to the extent of performing sequences of predefined movement patterns, or 'gaze gestures'. 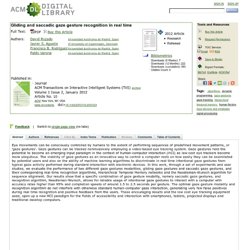 Gaze gestures can be tracked noninvasively employing a video-based eye tracking system. Gaze gestures hold the potential to become an emerging input paradigm in the context of human-computer interaction (HCI) as low-cost eye trackers become more ubiquitous. Mobile Learning: Pilot Projects and Initiatives. Security - Where to find a PIN lock screen that scrambles the keypad on every use? That is a very interesting question. 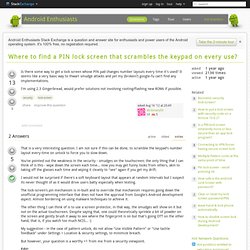 I am not sure if this can be done, to scramble the keypad's number layout every-time on unlock to force you to slow down. You've pointed out the weakness in the security - smudges on the touchscreen; the only thing that I can think of is this - wipe down the screen each time... now you may get funny looks from others, akin to taking off the glasses each time and wiping it cleanly to "see" again if you get my drift. I would not be surprised if there's a soft keyboard layout that appears at random intervals but I suspect its never thought of as it would drive users batty especially when texting. The lock-screen's pin mechanism is in-built and to override that mechanism requires going down the unofficial programming interface that does not have the approval from Google's Android development aspect.

Almost bordering on using malware techniques to achieve it. But however, your question is a worthy +1 from me from a security viewpoint. Security - Just how secure is a pattern lock? Stopping Screenlock Smudge Attacks On Android [Archive] - AllHatter.com. How do I Lock my Samsung Galaxy Note® II and customize my lock screen? my samsung. Page 1. 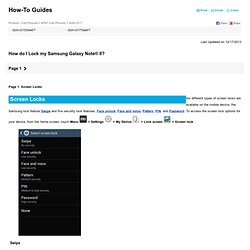 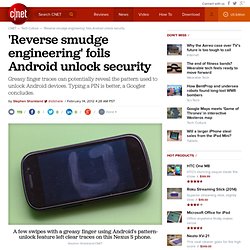 Then consider avoiding one of the ways Google offers to unlock an Android device. Google's mobile operating system lets people unlock devices by swiping a particular pattern across a three-by-three grid of dots. But Android evangelist Tim Bray raised a concern about "reverse smudge engineering" to figure out the unlock pattern.

"A couple of colleagues had my original Galaxy Tab and needed to use it for something, but I wasn't there. They managed to figure out my pattern by looking at the fingerprints on the glass, and it only took them a few minutes," Bray said in a post yesterday. I suspect it's probably not a huge problem for those of us who keep phones in a pocket that will swipe the screen. And it only took about five peanuts and 10 finger swipes to produce the photo above. The blog post got me thinking about what I think is a worse problem for the pattern-unlock feature: it can be very visible. Ice Cream Sandwich adds another choice: face unlock . Safe Unlocking. There are a bunch of ways to un­lock your An­droid de­vice. More or less all de­vices sup­port swipe, pat­tern, PIN, and pass­word. Which should you use? Bring Your Own Device (BYOD) Demands New Authentication Technology For Mobile Security. Employees in all industries are increasingly bringing their personal smartphones and tablets into the workplace and using them to access corporate networks, company email, business applications and other highly sensitive information. 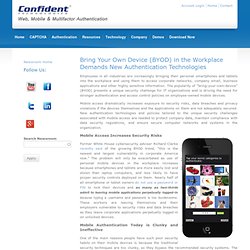 The popularity of “bring-your-own-device” (BYOD) presents a unique security challenge for IT organizations and is driving the need for stronger authentication and access control policies on employee-owned mobile devices. Mobile access dramatically increases exposure to security risks, data breaches and privacy violations if the devices themselves and the applications on them are not adequately secured.

New authentication technologies and policies tailored to the unique security challenges associated with mobile access are needed to protect company data, maintain compliance with data security regulations, and ensure secure computer networks and systems in the organization. Graphics.stanford.edu/~klingner/publications/GazeInputAccuracy.pdf. Your Eyes are Input Devices. We’ve all heard of the saying “if looks could kill”, but modify it a bit to “if looks could control computers” and it now becomes reality. 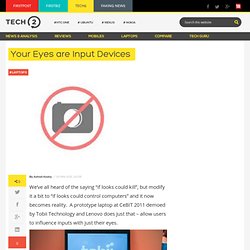 A prototype laptop at CeBIT 2011 demoed by Tobii Technology and Lenovo does just that – allow users to influence inputs with just their eyes. Tobii or not tobii Engadget got an eyes-on (heh) at the device and came away impressed. They were able to target the smallest application in a Macintosh-esque Expose-style layout consistently, and were able to bring up a dock of the most used applications just by looking beyond the left the screen. There was a demo of a game where the Asteroids came raining down upon Earth and users could blow up these Asteroids up just by looking at even the smallest among them. Trs-new.jpl.nasa.gov/dspace/bitstream/2014/38027/1/04-0074.pdf.