Here’s A Time-Lapse Of The Perseids — The Most Stunning Meteor Shower Of The ... 21 Interesting And Uplifting Facts About The Universe. Our universe holds the biggest mysteries yet to be solved by man. 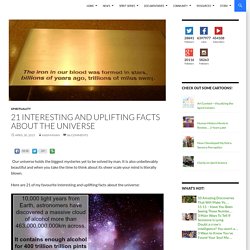 It is also unbelievably beautiful and when you take the time to think about its sheer scale your mind is literally blown. Here are 21 of my favourite interesting and uplifting facts about the universe: Share these beautiful facts with your family and friends. Kasim Khan – Team Spirit. The largest known structure in the Universe is a hole 1.8 billion light-years...

Astronomers have stumbled across the biggest object ever detected in the Universe… and it’s a void that stretches for 1.8 billion light years. 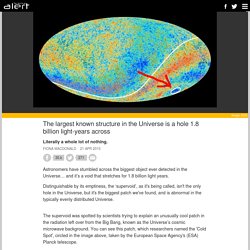 Distinguishable by its emptiness, the ‘supervoid’, as it's being called, isn't the only hole in the Universe, but it's the biggest patch we've found, and is abnormal in the typically evenly distributed Universe. The supervoid was spotted by scientists trying to explain an unusually cool patch in the radiation left over from the Big Bang, known as the Universe’s cosmic microwave background. You can see this patch, which researchers named the 'Cold Spot', circled in the image above, taken by the European Space Agency's (ESA) Planck telescope. For the past decade, researchers have been extremely interested in the Cold Spot, because it doesn't fit with our current understanding of how the Universe evolved. While a few small warm and cold patches are expected, we shouldn't see such big cold patches, according to the current model. Bill Watterson. Oldest Known Human Fossil Discovered. Scientists working in Ethiopia have discovered a jawbone complete with five teeth that belonged to an early member of our genus Homo. 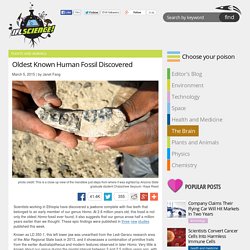 At 2.8 million years old, this fossil is not only the oldest Homo fossil ever found, it also suggests that our genus arose half a million years earlier than we thought. These epic findings were published in three new studies published this week. Known as LD 350-1, this left lower jaw was unearthed from the Ledi-Geraru research area of the Afar Regional State back in 2013, and it showcases a combination of primitive traits from the earlier Australopithecus and modern features observed in later Homo. Very little is known about our genus during the pivotal interval between 3 and 2.5 million years ago, with the oldest fossils of the Homo lineage dating back to about 2.3 or 2.4 million years ago. That is, until now. "To have a glimpse of the very earliest phase of our lineage's evolution is particularly exciting," Villmoare says in a news release. Photo Gallery. ... we are not the centre of Universe. Direction w watch. Carl Sagan appeals. Never alone.

Space. Laws of nature. Stegosaurus & t-rex. Amazing brain. Does it ever end. View These 18 Photos and You'll Likely Question Your Existence. The human species is great, but its tendency to claim superiority may be its affliction. 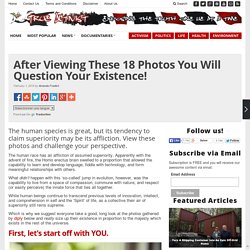 View these photos and challenge your perspective. The human race has an affliction of assumed superiority. Apparently with the advent of fire, the Homo erectus brain swelled to a proportion that allowed the capability to learn and develop language, fiddle with technology, and form meaningful relationships with others. What didn’t happen with this ‘so-called’ jump in evolution, however, was the capability to live from a space of compassion, commune with nature, and respect (or easily perceive) the innate force that ties all together. While human beings continue to transcend previous levels of innovation, intellect, and comprehension in self and the ‘Spirit’ of life, as a collective their air of superiority still reins supreme. First, let’s start off with YOU. Credit: Diply At 30,000 feet, this is what you look like: Credit: Flickr / Benjy At 100,000 feet, this is you: Credit: Wikipedia Credit: Gen Beta.

I fucking love it. All the stars at night. NASA Has Released The Largest Picture Ever Taken And It Will Shake Up Your Un... Ndt. Always true. Crazy ppl. Hydrogen. Life/universe.