Photographer Reveals The Heartbreaking Places Syrian Refugee Children Sleep. For the series “Where The Children Sleep,” photojournalist Magnus Wennman traveled through refugee camps in the Middle East to document the trials of Syrian families and their children. 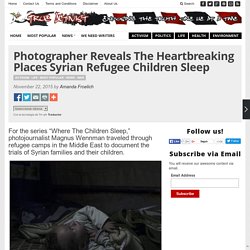 Credit: Magnus Wennman Fleeing conflict in the Middle East, many Syrian families have left behind the majority of their belongings, any semblance of security, and even close relatives to preserve their lives. To say the crisis has been traumatic for more than a few million souls is an understatement. According to recent statistics, over 10.6 million Syrians have been displaced from their homes since the conflict with ISIS began in 2011. The Economics of Syrian Refugees. In the wake of last Friday’s attacks on Paris, much has been written about Syrian refugees, and the (remote) possibility that ISIS-affiliated jihadis might slip into the United States among the ten thousand displaced people (many of them children) that the Obama Administration has committed to taking in during the next year. 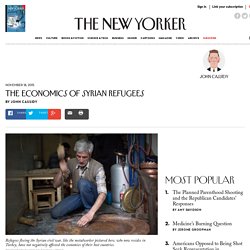 In contrast with discussions about immigration generally, there has been less comment about the economics of the issue. There are many arguments in favor of settling refugees here—not least what President Obama, responding to the announcement by some state governors that they would not accept Syrians fleeing their country’s civil war, called “our values”—but from a financial perspective, too, there is little doubt that the U.S. has the capacity to absorb many more Syrian refugees, and that the long-term impact of such a policy would be positive. Photographer captures haunting images of Syria's lost children. The European Refugee Crisis and Syria Explained. Countries sending most arms to Syria have accepted fewest of refugees they've... Combined, eight countries that sent most weapons to Syria since 2011 only accepted 2 percent of refugees that Germany has taken in. 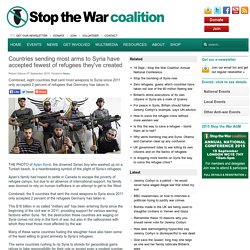 THE PHOTO of Aylan Kurdi, the drowned Syrian boy who washed up on a Turkish beach, is a heartbreaking symbol of the plight of Syria’s refugees. Aylan’s family had hoped to settle in Canada to escape the poverty of refugee camps, but due to an absence of international support, his family was doomed to rely on human traffickers in an attempt to get to the West. Saudi Arabia Has 100,000 Empty Tents with AC for 3 Million People – They’ve T... Paul Joseph Watson | Infowars While European countries are being lectured about their failure to take in enough refugees, Saudi Arabia – which has taken in precisely zero migrants – has 100,000 air conditioned tents that can house over 3 million people sitting empty. 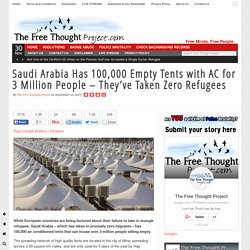 The sprawling network of high quality tents are located in the city of Mina, spreading across a 20 square km valley, and are only used for 5 days of the year by Hajj pilgrims. As the website Amusing Planet reports, “For the rest of the year, Mina remains pretty much deserted.” The tents, which measure 8 meters by 8 meters, were permanently constructed by the Saudi government in the 1990’s and were upgraded in 1997 to be fire proof. They are divided into camps which include kitchen and bathroom facilities. Hungary: Refugee Camp Profiles & Maps. Recently filmed videos and a scathing report from Human Rights Watch on the inhumane conditions inside the Roszke border detention facilities have garnered badly needed attention to human rights violations at the Roszke camps however there are several other refugee detention camps in Hungary. 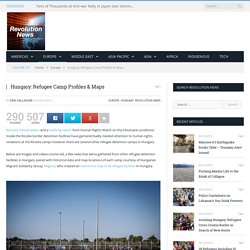 Below are images and videos (some old, a few new) that we’ve gathered from other refugee detention facilities in Hungary paired with historical data and map locations of each camp courtesy of Hungarian Migrant Solidarity Group, Migszol, who created an interactive map of all refugee facilities in Hungary. Roszke Refugee CampImage by Christopher Glanzl Kiskunhalas Immigration Detention. Support the White Helmets. Crisis in Syria. Syria is one of the most dangerous places in the world to be a child. 7.5 million Syrian children are in need of humanitarian aid, and 14 million children across the region have been affected by brutal conflict that began more than four years ago. 2.6 million children are no longer in school and close to 2 million are living as refugees in neighboring countries. 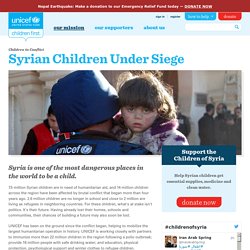 For these children, what's at stake isn't politics. It's their future. Having already lost their homes, schools and communities, their chances of building a future may also soon be lost.

Not Vouched For. RefugeAid. Foundation To Restore Equality And Education in Syria (Free-syria) - Humanita... ​a U.S. 501(c)3 non-profit The Jasmine Tent The Jasmine Tent is a project to create women's centers across Syria. 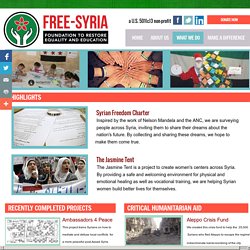 By providing a safe and welcoming environment for physical and emotional healing as well as vocational training, we are helping Syrian women build better lives for themselves. Ambassadors 4 Peace ​This project trains Syrians on how to mediate and defuse local conflicts for a more peaceful post-Assad Syria. Foundation to Restore Equality and Education in Syria (FREE-Syria) humanitarian aid. Aleppo Crisis Fund. Syrians Forced into Hunger. Syrian Network For Human Rights - Syrian Network For Human Rights.

Yasmin Al Tellawy. Earth: is there anyone out there? Giving is our business! Home - SAMS Foundation. Crisis in Syria. The United States remains committed to helping the innocent children, women, and men affected by the ongoing conflict in Syria. 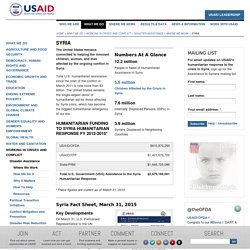 Total U.S. humanitarian assistance since the start of the conflict in March 2011 is now more than $3 billion. The United States remains the single-largest donor of humanitarian aid for those affected by Syria crisis, which has become the biggest humanitarian emergency of our era. *These figures are current as of March 31, 2015 Syria Fact Sheet, March 31, 2015 Key Developments On March 31, U.S.

IRIN - SYRIA: Turkey opens up to international aid in camps. ANKARA, 16 November 2012 (IRIN) - Turkey has treated Syrians fleeing to its territory better than most countries in the world ever would or could. 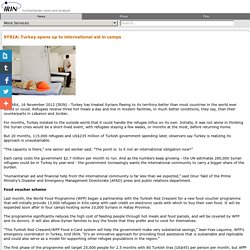 Refugees receive three hot meals a day and live in modern facilities, in much better conditions, they say, than their counterparts in Lebanon and Jordan. For months, Turkey insisted to the outside world that it could handle the refugee influx on its own. Initially, it was not alone in thinking the Syrian crisis would be a short-lived event, with refugees staying a few weeks, or months at the most, before returning home. But 20 months, 115,000 refugees and US$235 million of Turkish government spending later, observers say Turkey is realizing its approach is unsustainable. “The capacity is there,” one senior aid worker said. Each camp costs the government $2.7 million per month to run. Food voucher scheme. Hundreds of diaspora groups deliver aid to Syrians. Foreign Aid is Good, But Not Enough for Syria. April 1, 2015 Kuwait Emir Sheikh Sabah al-Ahmed al-Sabah (R) and U.N. 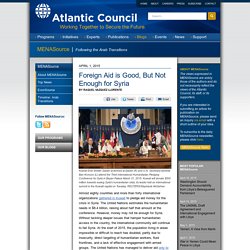