Hacktivists smash ISIS website with Prozac and Viagra ads. Anonymous is rickrolling ISIS as part of its plan to defeat terrorism - Trending. Anonymous is, by most accounts, losing its self-declared war on ISIS — and in spectacular fashion, too. 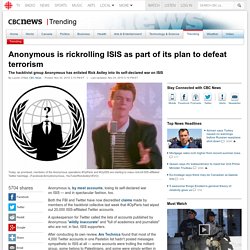 Both the FBI and Twitter have now discredited claims made by members of the hacktivist collective last week that #OpParis had wiped out 20,000 ISIS-affiliated Twitter accounts. A spokesperson for Twitter called the lists of accounts published by Anonymous "wildly inaccurate" and "full of academics and journalists" who are not, in fact, ISIS supporters.

After conducting its own review, Ars Technica found that most of the 4,000 Twitter accounts in one Pastebin list hadn't posted messages sympathetic to ISIS at all — some accounts were trolling the militant group, some belong to Palestinians, and some were simply written in Arabic. To put it more nicely than some have, the self-declared war is "falling apart," though not necessarily at the hands of Anonymous as a whole. Internet culture phenomenon Just after 3 a.m. Telegram App Shuts Down 78 ISIS-Related Channels.

Anonymous Taught the Internet How to Hack ISIS – 20,000 ISIS Twitter Accounts... After being called “idiots” by those who behead innocent people to further their cause, the hacker collective Anonymous dealt a huge blow to the terror group ISIS. 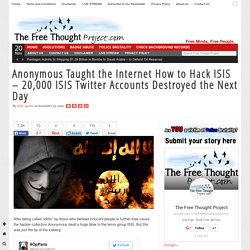 But this was just the tip of the iceberg. On Tuesday, the Free Thought Project reported on Anonymous taking down over 5,500 Twitter accounts tied to Islamic State members. Shortly after this victory, Anonymous published a ‘Guide to Fighting ISIS Online.’ Anonymous Will Crush ISIS Before Conservatives Do. Am I shirking my duty in the War Of Civilizations if I feel that Anonymous can do more to fck up Daesh's shit than can any of the plans already advanced by any of the Republican contenders?​ 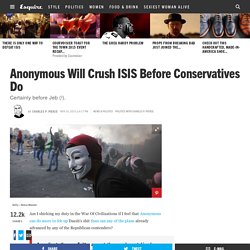 According to the same Twitter account, the group began taking down websites associated with ISIS this morning. Anonymous also retweeted a link to the following message from the hacktivist group Binary Sec: "We as a collective will bring an end to your reign of terror. We will no longer turn a blind eye to your cruel and inhumane acts of terrorism towards all other religions that are not Islam. We've watched you behead innocent people, kidnap and murder children, and then launch terrorist attacks in France.

This will NOT BE TOLERATED ANY LONGER. Advertisement - Continue Reading Below I certainly have more faith in them actually to do something constructive than I do in either Jeb (!) How To Hack ISIS: Anonymous Publishes Guide To Help Attack Islamic State's Online Presence. Anonymous is seeking to involve as many people as possible in its "war on Islamic State" as it publishes a series of guides to help people to identify and attack websites and social media accounts of ISIS online. 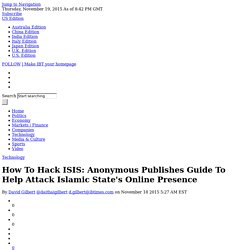 In the wake of the terror attacks in Paris on Friday, Anonymous vowed to hunt down those responsible and expose them, calling Operation Paris (or OpParis) "the biggest operation ever" against the extremist group. Earlier this year, an offshoot of Anonymous called GhostSec began tracking Twitter accounts associated with ISIS in an attempt to weaken their ability to spread their propaganda online. In the days since OpParis began, various groups within Anonymous have claimed to have identified tens of thousands of Twitter accounts and taken them offline, as well as targeting some ISIS-related websites, including one that it claims was a recruitment site for the terrorists, which is now permanently offline.

Jrr89. Uhbxh. Uk.businessinsider. Anonymous Takes Down 5,500 ISIS Accounts – 24 Hours After ISIS Called them “I... Paris, France – The Anonymous hacking collective has reportedly taken down over 5,500 Twitter accounts purported to belong to Islamic State members following their declaration of “total war” on the terrorist group after the Paris attacks. 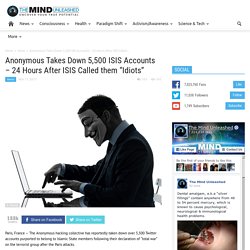 The announcement comes less than 24 hours after hacktivist group warned of a coordinated and targeted attack against the Islamic State in the wake of the deadly wave of terror attacks across Paris. Anonymous spokesman Alex Poucher told RT: “Our capability to take down ISIS is a direct result of our collective’s sophisticated hackers, data miners, and spies that we have all around the world.

We have people very, very close to ISIS on the ground, which makes gathering intel about ISIS and related activities very easy for us.” “They picked a fight with Anonymous when they attacked Paris, and now they should expect us,” he said, adding that the collective “will not sit by and watch these terror attacks unfold around the world.” featured image: Alamy. Britain hit by massive cyber-attack as Islamic State hackers launch assault a...

Britain has come under sustained cyber-attack as Islamist hackers launch revenge attacks against Anonymous, the shadowy group which has vowed to wipe "ISIS off the internet". 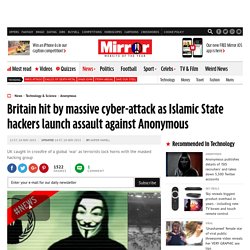 Unknown assailants launched their assault late last night and continued throughout the day. Using a Twitter account set up to publicise its anti-ISIS operation, Anonymous said Britain had been "lit up" by the digital blitzkreig. Although it is often impossible to tell who is behind serious cyber-attacks, it is likely that ISIS supporters have targeted Britain in revenge for an Anonymous campaign called OpParis. Anonymous Posts List of ISIL Websites and the US, UK Firms That Host Them.

This is the latest in a string of recent actions dubbed #OpISIS, in which the hackers — in particular an Anonymous faction known as GhostSec — have taken aim at the online resources of the internet-savvy Islamic State propagandists. 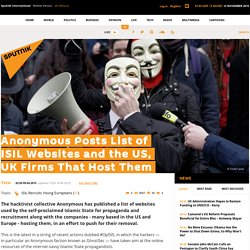 The hackers note that US-based Cloudflare is the "by far worst offender" on the list, which also includes Yahoo! , Google and GoDaddy. OVH, the largest web hosting service in Europe, and LeaseWeb also make an appearance on the list. On the site where the list was posted, GhostSec explained the action: "It is our sincerest hope that the media use this as a tool to show the world that the Islamic State is everywhere in some shape or form and that companies are unaware of their customers content or they turn a blind eye for easy profit and choose to accept bloodmoney. " To date, as part of their cyber campaign against IS, Anonymous claims to have attacked more than 200 websites, and "destroyed" 85 of them.

Anonymous Aims to Completely Wipe ISIS Off of the Internet (#OpISIS) AnonHQ. Anonymous Anonymous has been engaged in Operation ISIS (#OpISIS) for a long time now and have successfully attacked hundreds of websites and taken down thousands of Twitter and Facebook accounts. 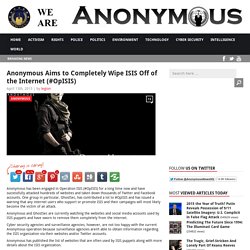 One group in particular, GhostSec, has contributed a lot to #OpISIS and has issued a warning that any internet users who support or promote ISIS and their campaigns will most likely become the victim of an attack. Anonymous and GhostSec are currently watching the websites and social media accounts used by ISIS puppets and have sworn to remove them completely from the internet. Cyber security agencies and surveillance agencies, however, are not too happy with the current Anonymous operation because surveillance agencies aren’t able to obtain information regarding the ISIS organization via their websites and/or Twitter accounts. Anonymous Reveals 26,000+ Twitter Handles Allegedly having Links with ISIS. Glogin?mobile=1&URI=

Latest Intelligence Archive. Islamic State Websites. EPIC on Twitter: "50% of work done on Qamar server. Keep up your duas, it's w... AlThickSheikh. In The Name of Allah, the Most Merciful the Most Compassi... - justpaste.it. In The Name of Allah, the Most Merciful the Most Compassionate New E-Book by Sheikh Abi Humaam al-Atharri refutes those who call #IS Khawaarij Long document that debunk all the lies against the Islamic State in Arabic Refutations, clarifications, judgements, and articles of knowledge for the Munasireen of #IS Debunked Hundreds Lies Against The Islamic State: Jahbat al nusra exposed and their lies against IS debunked Jabhat Al Nusrah kills civilians because Jabhat Al Nusrah thinks the civilians are working with Islamic State Jordanian-Palestinian Politician: There Is No ISIS Ideology – It's Another Lie of Sh. al-Mohaisany EXPOSED by an ex Jahbat al nusra fighters This is an amazing explication for all those who havent seen this video (turkish/english) Abu Hanzala on the War against the Islamic State The Caliphate is valid MUST This matter (rule) will remain with the Quraish, and none will rebel against them, but Allah will throw him down on his face, as long as the Quraish uphold the Deen. 1. 2. 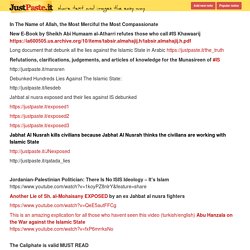