This 13-Year-Old Activist Helps The Homeless By Organizing Nights Of Fun. Caleb White’s philanthropic activities began when he was just six years old. 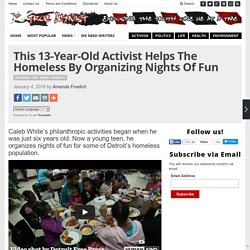 Now a young teen, he organizes nights of fun for some of Detroit’s homeless population. There are many remarkable young people investing their time and talents to help others in this world. From 9-year-old Hailey Fort who builds tiny homes for the homeless to Dusty Liulay who feeds about 100 homeless people per week in Portland, Oregon, they and their tales are beyond inspiring. Another young activist whose story is worth sharing is Caleb White from Detroit, Michigan. Giphy. The end of capitalism has begun. How America Is Killing The Middle Class. Postal Banking: A Lifesaver for America's Poor. A social contract has existed between banks and the government since the early days of the republic. 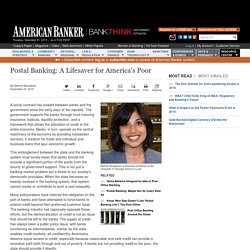 The government supports the banks through trust-inducing insurance, bailouts, liquidity protection, and a framework that allows the allocation of credit to the entire economy. Banks, in turn, operate as the central machinery of the economy by providing transaction services, a medium for trade and individual and business loans that spur economic growth. This entanglement between the state and the banking system must surely mean that banks should not exclude a significant portion of the public from the bounty of government support. This is not just a banking market problem but a threat to our society's democratic principles. Does Appearance Change How People Are Treated?

Instead of Accepting Faux Charity from the Rich, Let’s Just Cut Off Their Heads. Earlier this month Mark Zuckerberg entered the headlines for “giving away” 99% of his Facebook shares to “charity.” 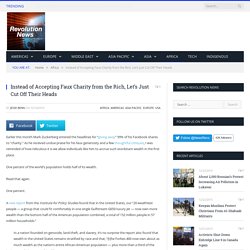 As he received undue praise for his faux generosity and a few thoughtful critiques, I was reminded of how ridiculous it is we allow individuals like him to accrue such exorbitant wealth in the first place. One percent of the world’s population holds half of its wealth. Read that again. One percent. A new report from the Institute for Policy Studies found that in the United States, our “20 wealthiest people — a group that could fit comfortably in one single Gulfstream G650 luxury jet — now own more wealth than the bottom half of the American population combined, a total of 152 million people in 57 million households.”

15 Years Of Terror: This Amazing Time-Lapse Map Shows Terrorist Attacks Since 9/11 AnonHQ. Intelligence Milan R Vuckovic, a Berlin-based designer and data sleuth, has created an incredible time-lapse map that shows the location of every single terrorist attack, in which more than 20 people were killed, in the past 15 years, from 9/11 attack on Twin Towers and 13/11 attack on Paris. 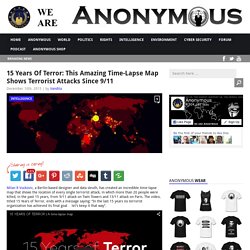 The video, titled 15 Years of Terror, ends with a message saying: “In the last 15 years no terrorist organization has achieved its final goal… let’s keep it that way”. Powerful Satirical Illustrations Show What War Really Looks Like. “It is forbidden to kill; therefore all murderers are punished unless they kill in large numbers and to the sound of trumpets.” 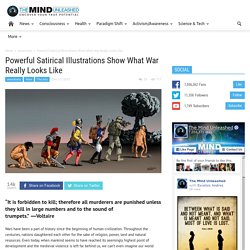 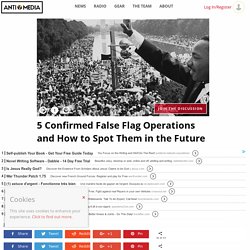 The Economy Of Death: A Look At The 2016 National Defense Authorization Act. Monday October 26, 2015 Joe Bowman Each year the federal government spends 70 cents of every budget dollar on past, present, and future wars. 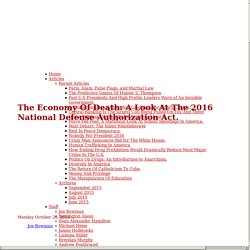 The American people are devoting more resources to the war machine than is spent by all federal, state, and local governments on health and hospitals, education, old-age and retirement benefits, public assistance and relief, unemployment and social security, housing and community development, and the support of agriculture. This City Just Found A Brilliant Solution to High Rent. d2ZcD2REBliFeTew. The 6 Common Welfare Myths We All Need to Stop Believing. _npycwcJidw1s335jfo1_r1_540. Demonizing the Poor. In April, Kansas Gov. 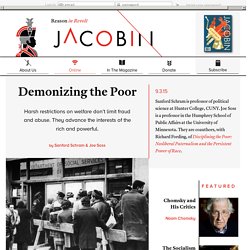 Sam Brownback signed into law a new set of welfare rules titled, with an Orwellian flourish, the HOPE Act. The measure, Brownback stated, “provides an opportunity for success. It’s about the dignity of work and helping families move from reliance on a government pittance to becoming self-sufficient by developing the skills to find a well-paying job and build a career.” Yet as critics were quick to point out, the new law was clearly more about limiting poor people’s decisions than about building their careers. How Globalization Fuels Terrorism and Fundamentalism. By Helena Norberg-Hodge / localfutures.org For people in the modern world, there may be nothing more difficult to comprehend than the group calling itself the Islamic State, or ISIS. 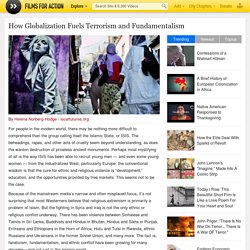 The beheadings, rapes, and other acts of cruelty seem beyond understanding, as does the wanton destruction of priceless ancient monuments. Perhaps most mystifying of all is the way ISIS has been able to recruit young men — and even some young women — from the industralized West, particularly Europe: the conventional wisdom is that the cure for ethnic and religious violence is “development,” education, and the opportunities provided by free markets.

Loop GIF - Find & Share on GIPHY. The Four Horsemen of Gentrification. Heartbreaking: Here’s What A U.S Soldier Said When Asked To Justify The War O... "You grew up wanting so bad to be Luke Skywalker, but you realize that you were basically a Stormtrooper, a faceless, nameless rifleman, carrying a spear for empire, and you start to accept the startlingly obvious truth that these are people like you. 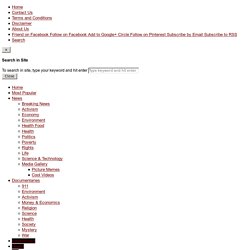 " When a Reddit user posted an open question to U.S soldiers asking them how they justify their actions against innocent civilians abroad, he probably didn’t expect this candid response… ‘You kill. Watch friends die. _n1h938PkP21siydk1o1_400. Socialist Utopia Does Exist... in a Small Town in Andalucía. Can you imagine a place on earth where there is virtually no unemployment, no police, no crime and everyone earns a salary of 1,200 euro a month? It sounds idyllic, doesn’t it? Well, there is a town like this and out of all the places in the world, it’s a nondescript, typical whitewashed town in Spain’s most southern region, Andalucía.

It goes by the name of Marinaleda and looks the same as any other Andalucian village that relies on farming as one of its main sources of income. Part 3: 20 More Signs That The Global Elite’s Ship Is About To Sink. With the signs that the intensity of the geopolitical chess game is continuing to increase, it’s been decided that Part 3 of this developing story needed to be written. If you have not yet read part 1 or part 2, consider doing so before finishing this article as it will make much more sense. Once again, there is a battle going on between a very large international alliance that is working for the benefit of humanity versus a shrinking cabal of banking and political elite. This battle is taking place politically, financially, militarily, and energetically; and is becoming increasingly clear to see. September 7th, 2015: China’s New Oil Contract Signals Shift Away from Brent Crude and US Dollar.

25 Signs (Plus 14 More) That The Global Elite’s Ship Is About To Sink. Part 2 of this developing story: If you have not read Part 1 yet, please do so before reading this article as it will make much more sense. Since the release of Part 1, we have seen the geopolitical chess game drastically intensify with several more major indications that something very big is happening behind the scenes at the highest levels of governance and finance. 1.

'Out of Control' Inequality: Global One Percent Owns Half of World's Wealth. The top one percent of households "account for half of all assets in the world," according to a new report from a leading multinational bank. The 2015 Credit Suisse Global Wealth Report puts worldwide wealth inequality at a level "possibly not seen for almost a century," the researchers write. Filmmaker Dies Of Malaria After Exposing Cruelty In Firestone Tire And Rubber... 10 corporate welfare programs that will make your blood boil. _nwhvb4DSCc1qhpsl4o1_400. Swiss Study Shows 147 Technocratic “Super Entities” Rule the World - Top US &... Forbes Welcome. US Runs Tank over Evidence Before Afghan Hospital Bombing Investigation Begins. Cassius Methyl October 16, 2015 (ANTIMEDIA) Kunduz, Afghanistan — On Wednesday, an international panel announced it will pursue an investigation into the United States’ bombing of a Médecins sans Frontière (MSF, or Doctors Without Borders) hospital in Kunduz, Afghanistan.

The U.S. bombing in Kunduz killed 22 people and is being called a war crime. As described by MSF international president, Joanne Liu, “Our patients burned in their beds; MSF doctors, nurses, and other staff were killed as they worked. The Higher Learning. Since the 1990s, a major part of Chinese foreign policy has been to invest in developing countries around the world.

This includes private investments, like the billion-dollar solar project being spearheaded by a Chinese energy company in Ghana or the multibillion-dollar canal being built by a Chinese infrastructure firm in Nicaragua. The Sweatshop Feminists. China, Russia, Norway, Brazil, Taiwan Dump US Treasuries. Five large purchasers of US Treasuries – China, Russia, Norway, Brazil, and Taiwan – have changed their minds. This Is What The World's Largest Companies Are Making Off Their Employees. #TBT: Osama Bin Laden: Road Builder And CIA Asset. A decades-old media report, penned years before 9/11, celebrates bin Laden for building a road through war-torn Sudan. Stephen Hawking Says We Should Really Be Scared Of Capitalism, Not Robots.