Timeline: What Happens To Your Body When You Quit Smoking AnonHQ. Health By now, we should all be aware of the damage smoking does to our bodies. 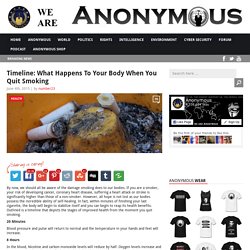 If you are a smoker, your risk of developing cancer, coronary heart disease, suffering a heart attack or stroke is significantly higher than those of a non-smoker. However, all hope is not lost as our bodies possess the incredible ability of self-healing. In fact, within minutes of finishing your last cigarette, the body will begin to stabilize itself and you can begin to reap its health benefits. Outlined is a timeline that depicts the stages of improved health from the moment you quit smoking. 20 Minutes Blood pressure and pulse will return to normal and the temperature in your hands and feet will increase. 8 Hours In the blood, Nicotine and carbon monoxide levels will reduce by half. 48 Hours Carbon monoxide and Nicotine is eliminated from the body. 3 Months Lung function and circulation will have significantly improved. Between 1 – 9 Months.

This Is What Alcohol Really Does To Your Brain. Everybody likes a good alcoholic beverage every now and again, but you may want to rethink your nightly cocktail. 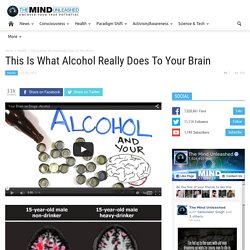 Alcohol might do more harm than it does anything, specifically to your brain. Study after study suggests that alcohol in moderation may promote heart health and even ward off diabetes and dementia. The evidence is so plentiful that some experts consider moderate drinking about one drink a day for women, about two for men saying it’s a central component of a healthy lifestyle. WikiLeaks Cables Reveal U.S. Government Planned To “Retaliate & Cause Pain” O... Studies that link Genetically Modified (GM) food to multiple human health ailments are not the only thing that has millions of people questioning the production of GM food. 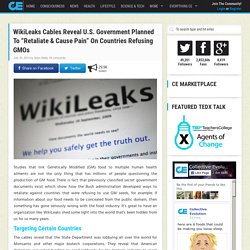 There is fact that previously classified secret government documents exist which show how the Bush administration developed ways to retaliate against countries that were refusing to use GM seeds, for example. If information about our food needs to be concealed from the public domain, then something has gone seriously wrong with the food industry. 8 Great Sources Of Protein That Aren’t Meat. They Told You These 15 Horrifying Facts About Processed Meat Were True. This ... A recent BuzzFeed video had terrified everyone with a list of what really goes into processed meat: liquefied meat? 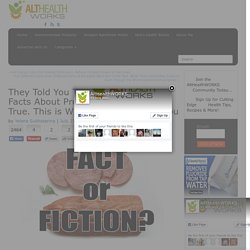 Rodent hairs? Silicon Dioxide? But are these claims really true? Let’s find out. Claim #1: Chicken Nuggets Are Made From a Liquefied Meat Product Most likely. Yet when doctors from the University of Mississippi looked at two chicken nuggets from two undisclosed restaurants through a microscope, they found 40-50% skeletal muscle, and the rest was a combination of fat, blood vessels, nerves, skin and organs, as was published in American Journal of Medicine and reported on by The Atlantic. Dr. Claim #2: Rodent Hairs are Legally Allowed in Your Food TRUE! Claim #3: Meat Can Be Treated with Carbon Monoxide to Keep It Red TRUE! The Food Marketer's Tricks AnonHQ. 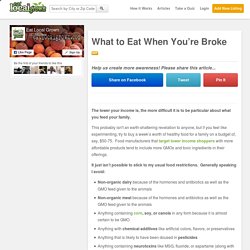 This probably isn't an earth-shattering revelation to anyone, but if you feel like experimenting, try to buy a week’s worth of healthy food for a family on a budget of, say, $50-75. Food manufacturers that target lower income shoppers with more affordable products tend to include more GMOs and toxic ingredients in their offerings. It just isn’t possible to stick to my usual food restrictions. Generally speaking I avoid: It is a matter, then, of weighing the pros and cons, and figuring out what things, for you, are the most important, while also deciding which standards can be sacrificed. Food sovereignty. Fast food. Hot dogs leukemia. How-To: Juice with Cro-Mag’s John Joseph. Don't wanna b a nugget. Control the seed. Veggie protein. Honey. Natural anti depressants. Wheatgrass. Detox. Banksy mcd's. Coconut. 10 2. 10 1. GMO timeline. We should all be Eating more Turmeric, here's Why... Who needs medication when nature gave us turmeric. 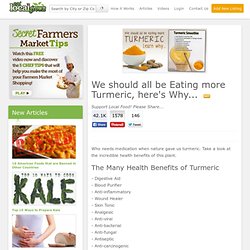 Take a look at the incredible health benefits of this plant. The Many Health Benefits of Turmeric. US company in Iowa churns out 100 cloned cows a year. In the meadow, four white-haired Shorthorn heifers peel off from the others, raising their heads at the same time in the same direction. 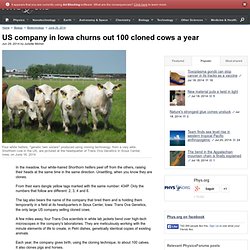 Unsettling, when you know they are clones. From their ears dangle yellow tags marked with the same number: 434P. Only the numbers that follow are different: 2, 3, 4 and 6. The tag also bears the name of the company that bred them and is holding them temporarily in a field at its headquarters in Sioux Center, Iowa: Trans Ova Genetics, the only large US company selling cloned cows. Creamsicles. Bacon. More likely. All food was organic. Don't think it means. Monsanto. Banksy mcd's. Cancer causing foods. It came from Monsanto. Margarine. Undercover Investigation at Hy-Line Hatchery. Reclaimed meat.