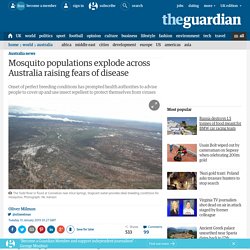 More than 200mm of rain has hit parts of central Australia since Wednesday, submerging houses in Alice Springs. Standing pools of water are expected to lead to a boom in mosquito numbers, raising fears of disease carried by the insects. Health authorities are concerned that Murray Valley encephalitis virus, which can lead to coma and brain damage, and the more common Ross River virus, could be spread. Alice Springs residents have been advised to use mosquito repellant liberally and to cover up exposed limbs. Meanwhile, warm weather followed by rain and king tides have caused mosquito numbers to escalate on the east coast, with Brisbane city council conducting its largest mosquito-reduction effort in 15 years. Dengue fever cases rise in north Queensland. Queensland Health officials urged residents to deal with mosquito breeding grounds. 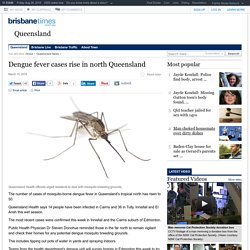 The number of cases of mosquito-borne dengue fever in Queensland's tropical north has risen to 50. Queensland Health says 14 people have been infected in Cairns and 36 in Tully, Innisfail and El Arish this wet season. The most recent cases were confirmed this week in Innisfail and the Cairns suburb of Edmonton. Public Health Physician Dr Steven Donohue reminded those in the far north to remain vigilant and check their homes for any potential dengue mosquito breeding grounds. This includes tipping out pots of water in yards and spraying indoors. Teams from the health department's dengue unit will survey homes in Edmonton this week to try and stop the virus spreading further. Dengue symptoms include headaches, muscle and joint pains, vomiting and diarrhoea. A tale of three mosquitoes: how a warming world could spread disease. Changing wildlife: this article is part of a series looking at how key species such as bees, insects and fish respond to environmental change, and what this means for the rest of the planet. 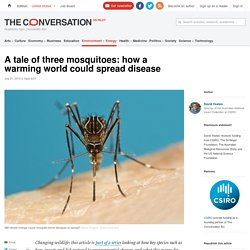 As the world warms, animals and plants will shift their ranges to keep pace with their favoured climate. While the changing distributions of species can tell us how climate change is affecting the natural world, it may also have a direct impact on us. One good example is the disease carried by insects. Those small, familiar flies called mosquitoes are responsible for much human suffering around the globe because of their ability to transmit diseases. Mosquitoes transmit a number of viruses, such as Dengue, Ross River Virus, Murray Valley Encephalitis Virus and the local variant of the West Nile Virus known as Kunjin. Dengue fever cases spike in SA, Government urges travellers to protect themselves. Posted. 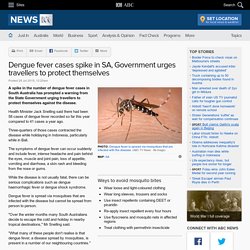 Are we doing enough to promote the effective use of mosquito repellents? Health authorities need to review recommendations on how to choose and use mosquito repellents Mosquito-borne pathogens remain a threat to public health in Australia. 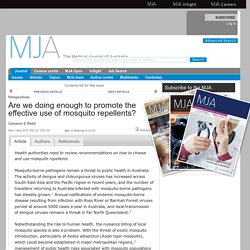 The activity of dengue and chikungunya viruses has increased across South-East Asia and the Pacific region in recent years, and the number of travellers returning to Australia infected with mosquito-borne pathogens has steadily grown.1 Annual notifications of endemic mosquito-borne disease resulting from infection with Ross River or Barmah Forest viruses persist at around 5000 cases a year in Australia, and local transmission of dengue viruses remains a threat in Far North Queensland.2 Notwithstanding the risk to human health, the nuisance biting of local mosquito species is also a problem.

DengueMap. Marker Color Marker color reflects the noteworthiness of events at a particular location during a given time window. 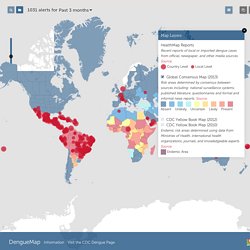 An event's degree of noteworthiness is based on the significance rating of the alert provided by HealthMap users. In the absence of user ratings, the system assigns a composite score based on the disease importance and the news volume associated with the alert. If a location's marker has multiple alerts, the color associated with the most prominent alert is used. Marker Size The large circle indicates a country-level alert, while state, province and local alerts are indicated by the small circle. 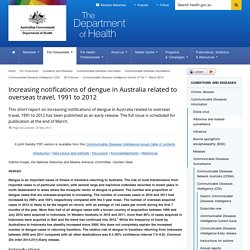 Sterile mosquitoes released in China to fight dengue fever. This spring, a team of scientists has been driving around a small island in Guangzhou, southern China, releasing more than half a million mosquitoes from plastic pots on board trucks. 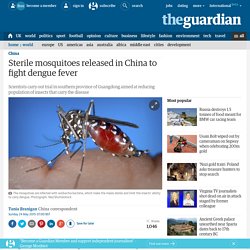 Rather than chasing the researchers away, families have welcomed their incursion: “Some residents have even asked to get mosquitoes from us to release in their own home,” said Xi Zhiyong of Michigan State University, who heads the project. The sight of the insects might set the skin crawling, but people know the alternative could be worse: this is one of several innovative attempts to tackle dengue fever by diluting the mosquito population with insects that don’t carry the disease.

The mosquito-borne sickness causes pain so agonising it is also known as “breakbone disease” and last year saw China’s worst outbreak in two decades, with more than 47,000 cases, almost all in Guangdong province. Before 1970, only nine countries had severe dengue epidemics; now it is endemic in more than 100 countries. Protection. Genetically Modified Mosquito Sparks a Controversy in Florida by Lisa Palmer: Yale Environment 360. 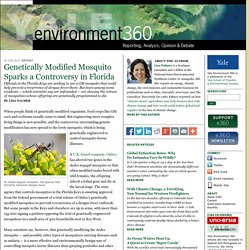 But engineering more complex living things is now possible, and the controversy surrounding genetic modification has now spread to the lowly mosquito, which is being Marcos Teixeira de Freitas/Flickr An Aedes aegypti mosquito, the species that primarily transmits dengue fever. genetically engineered to control mosquito-borne illnesses. A U.K. Many scientists say, however, that genetically modifying the Aedes mosquito — and possibly other types of mosquitoes carrying diseases such as malaria — is a more effective and environmentally benign way of controlling mosquito-borne illnesses than spraying pesticides and other measures. A genetically engineered mosquito has proven itself in other countries, successfully reducing populations of the insect. Panama. Our challenge to control dengue with Wolbachia. Recommendation 1 - Vaccination. Recommendation 2 - Surveillance. Recommendation 3 - Ecology. Recommendation 4 - Environment. Eliminate Dengue - A natural method to reduce the spread of dengue. 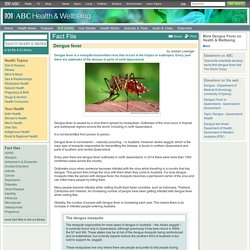 Do you know where the world's most dangerous mosquitoes live? Dengue. Modifying mosquitoes to stop transmission of dengue fever. Dengue is a virus spread via the Aedes aegypti mosquito that infects as many as 100 million people annually in more than 100 tropical countries worldwide. It causes fevers, extreme headaches, and muscle and joint pains. In a few extreme cases, leakage of blood plasma through the walls of small blood vessels into the body cavity occurs, resulting in bleeding.

This is known as dengue hemorrhagic fever. The number and severity of dengue infections has been escalating since the Second World War, culminating in a 30-fold increase between 1960 and 2010. It is now 20 times more common than the flu. There is no treatment for dengue fever. As a result of its prevalence all around the world, scientists are looking for new ways to control Aedes mosquitoes – and thus dengue transmission.