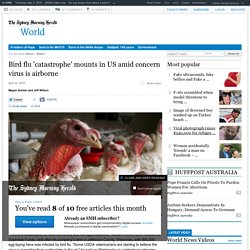 Midwestern states are struggling to contain a virulent strain of bird flu that has doomed millions of turkeys and chickens since March. Photo: AP Chicago: Deadly bird flu swelled in the poultry industry in Minnesota and neighbouring Wisconsin amid speculation that winds may be carrying virus particles into facilities housing turkeys and chickens. "This is a catastrophe for both the turkey and the egg industries," William Rehm, the President of Daybreak Foods, said after his company's farm in Jefferson County, Wisconsin, with 800,000 egg-laying hens was infected by bird flu. "Some USDA veterinarians are starting to believe the virus is spreading from particulates in the air," he said on Wednesday in a telephone interview. 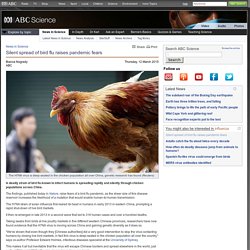 The findings, published today in Nature, raise fears of a bird flu pandemic, as the sheer size of this disease reservoir increases the likelihood of a mutation that would enable human-to-human transmission. Division of Public Health Services Vector Borne and Zoonotic Disease Section. Birds have their own influenza (flu) viruses, known as bird flu or avian influenza (AI) that is caused by type A influenza viruses. 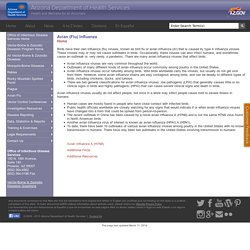 These viruses may or may not cause outbreaks in birds. Occasionally, these viruses can also infect humans, and sometimes cause an outbreak or, very rarely, a pandemic. Influenza animation - flu virus mechanism. Avian Flu Talk: British microbiologist discusses H5N1. Influenza A virus subtype H5N1. According to the World Health Organization and United Nations Food and Agriculture Organization, H5N1 pathogenicity is gradually continuing to rise in endemic areas, but the avian influenza disease situation in farmed birds is being held in check by vaccination, and so far there is "no evidence of sustained human-to-human transmission" of the virus.[3] Eleven outbreaks of H5N1 were reported worldwide in June 2008 in five countries (China, Egypt, Indonesia, Pakistan and Vietnam) compared to 65 outbreaks in June 2006 and 55 in June 2007. 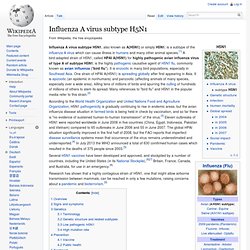 The global HPAI situation significantly improved in the first half of 2008, but the FAO reports that imperfect disease surveillance systems mean that occurrence of the virus remains underestimated and underreported.[4] In July 2013 the WHO announced a total of 630 confirmed human cases which resulted in the deaths of 375 people since 2003.[5] Overview[edit] Signs and symptoms[edit] Genetics[edit] Terminology[edit] Genetic structure and related subtypes[edit] No way of stopping leak of deadly new flu, says terror chief. Influenza1. H5N1 and Scotland: Trivia – Rasta Livewire. 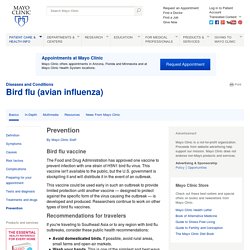 This vaccine isn't available to the public, but the U.S. government is stockpiling it and will distribute it in the event of an outbreak. This vaccine could be used early in such an outbreak to provide limited protection until another vaccine — designed to protect against the specific form of the virus causing the outbreak — is developed and produced. Researchers continue to work on other types of bird flu vaccines.

Recommendations for travelers If you're traveling to Southeast Asia or to any region with bird flu outbreaks, consider these public health recommendations: Avoid domesticated birds. Poultry and egg products Because heat destroys avian viruses, cooked poultry isn't a health threat. Avoid cross-contamination. References Ferri FF. Preventitive measures: Case Farms among companies working to prevent avian influenza - News - Shelby Star - Shelby, NC. 4 Arizona sites under quarantine from bird-flu scare. Four properties in Arizona are under quarantine after receiving shipments of birds and eggs from a facility in Iowa where bird flu was detected, according to agriculture officials. 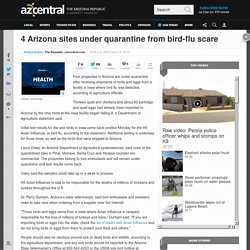 Thirteen quail and chickens and about 40 partridge and quail eggs had already been imported to Arizona by the time birds at the Iowa facility began falling ill, a Department of Agriculture statement said. Initial test results for the sick birds in Iowa came back positive Monday for the H5 Avian Influenza, or bird flu, according to the statement. Additional testing is underway for those birds, as well as the birds that were shipped to Arizona. Laura Oxley, an Arizona Department of Agriculture spokeswoman, said none of the quarantined sites in Pinal, Mohave, Santa Cruz and Yavapai counties are commercial. The properties belong to bird enthusiasts and will remain under quarantine until test results come back. Oxley said the samples could take up to a week to process. Dr. Avian influenza. Avian influenza (AI) is an infectious disease of birds caused by an influenza virus. 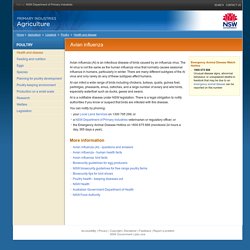 The AI virus is not the same as the human influenza virus that normally causes seasonal influenza in humans, particularly in winter. There are many different subtypes of the AI virus and only rarely do any of these subtypes affect humans. AI can infect a wide range of birds including chickens, turkeys, quails, guinea fowl, partridges, pheasants, emus, ostriches, and a large number of aviary and wild birds, especially waterfowl such as ducks, geese and swans. AI is a notifiable disease under NSW legislation. There is a legal obligation to notify authorities if you know or suspect that birds are infected with this disease. Department of Agriculture Avian Influenza or Bird Flu. ​​​​​The Key Facts Avian influenza and human pandemic influenza are different diseases.Avian influenza in birds does not easily cause disease in humans. 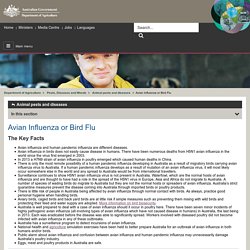 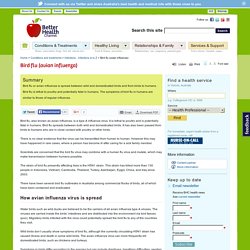 It is lethal to poultry and is potentially fatal in humans. Bird flu spreads between both wild and domesticated birds. It has also been passed from birds to humans who are in close contact with poultry or other birds. There is no clear evidence that the virus can be transmitted from human to human. However this may have happened in rare cases, where a person has become ill after caring for a sick family member.

H5N1 (Avian Flu) H5N1 is a highly pathogenic avian (bird) flu virus that has caused serious outbreaks in domestic poultry in parts of Asia and the Middle East. 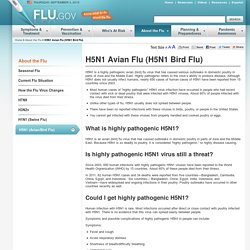 Highly pathogenic refers to the virus’s ability to produce disease. Environmental_factors_affecting_the_spread_of_bird_flu.pdf. Avian Influenza Virus (H5N1) Outbreak: super-flu research to be published? Deadly man-made strain of H5N1 bird flu virus raises controversy. A group of scientists are trying to publish a paper on how they created a new flu virus that could wipe out all humanity. The study that produced the virus is the subject of raging controversy, with some scientists saying it should never have been done. Concern about the threat of the virus is heightened by the realization of the damage it could do if it is accidentally released from the laboratory or it gets into the hands of people who may want to use it for mischievous purposes. The research study has raised a debate on the limits of scientific freedom, especially in cases of "dual-use research," that is, studies with potential public health benefit but which could also be adapted for mischief, such as bio-warfare.

Daily Mail reports the new deadly virus is the genetically modified version of H5N1 bird flu virus. The new virus, however, is much more infectious than the original H5N1 strain, and if accidentally released could spread across the globe in a short time. OIE: Avian Influenza. OIE - H5 and H7 - 2011. This page has been set up at the start of the epizootic of Highly Pathogenic Avian Influenza due to H5N1 in South East Asia in late 2003, before its expansion later to other continents.