EB%2010 11%20Fire stamped. EB%2010 11%20Police stamped. Detroit police staffing at historic low, yet academy remains quiet. DETROIT, MI -- The Detroit Police Department is looking to fill hundreds of patrol positions this year, yet the halls of the former school that houses the Detroit Police Academy at 6050 Linwood in Detroit are mostly silent. 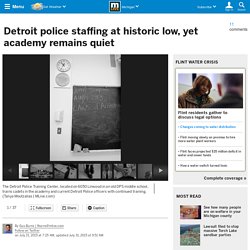 "We have a class in the academy that just started, and I think that was just 30 people," said Mark Diaz, president of the Detroit Police Officers Association. "Of those 30 that were hired, five just last week already quit. " Diaz says the number of front-line police in Detroit is "the lowest it's ever been in anyone's life. " George Hunter of the Detroit News this month wrote that the police force is the smallest it's been since bolstering numbers to combat Prohibition violators in the 1920s. The Department lost another 10 this month, Diaz said, bringing the total number of patrol officers to 1,580, and a tad over 2,000 if command staff and administrative personnel are included. 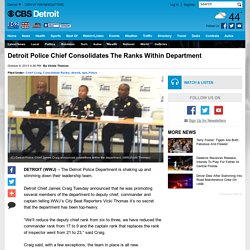 Detroit Chief James Craig Tuesday announced that he was promoting several members of the department to deputy chief, commander and captain telling WWJ’s City Beat Reporters Vicki Thomas it’s no secret that the department has been top-heavy. “We’ll reduce the deputy chief rank from six to three, we have reduced the commander rank from 17 to 9 and the captain rank that replaces the rank of inspector went from 21 to 23,” said Craig. Craig said, with a few exceptions, the team in place is all new. Captain Donna Jarvis. Resources: Where to find Detroit Fire Department items. I often get questions from readers like you. 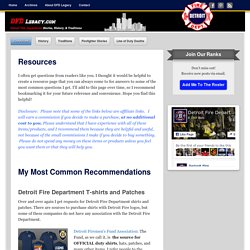 I thought it would be helpful to create a resource page that you can always come to for answers to some of the most common questions I get. I’ll add to this page over time, so I recommend bookmarking it for your future reference and convenience. Hope you find this helpful! Disclosure: Please note that some of the links below are affiliate links. I will earn a commission if you decide to make a purchase, at no additional cost to you. Detroit Fire Department T-shirts and Patches Over and over again I get requests for Detroit Fire Department shirts and patches. Detroit Firemen’s Fund Association: The Fund, as we call it, is the source for OFFICIAL duty shirts, hats, patches, and many other items.

Detroit Fire Department Ride-alongs: At the time of this writing, I am not aware of any department sanctioned ride-along program. Another thing I love about this movie is that when you purchase you are helping provide gear for Detroit Firefighters. Detroit budget. Detroit is at a political impasse that could lead to a financial collapse next month. 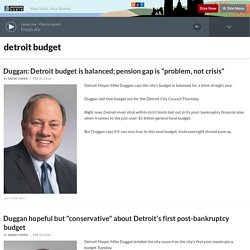 Now, one state legislator is saying Lansing should consider “all its options”—including possibly dissolving the city as a municipality. The idea of dissolving Detroit—and effectively merging it with Wayne County—has popped up occasionally in some business and political circles recently. But mid-Michigan senator Rick Jones is the first official to publicly discuss that as an option. Jones says Detroit’s local leaders just aren’t dealing with the city's fiscal problems—and having the state’s biggest city file for municipal bankruptcy would be “horrible.”

“I think everything is on the table,” Jones said. “ I would be willing to consider dissolving the city, if that’s what it took. “One of the options could be actually dissolving the city of Detroit, and putting all of their functions back into Wayne County. Still, Jones acknowledges this merger scenario is “unlikely.” "Lack of accountability, poor management" source of Detroit Fire Dept. problems. Our conversation with Steve Neavling The news site Motor City Muckraker took it upon itself to track every fire in the city of Detroit for a year. 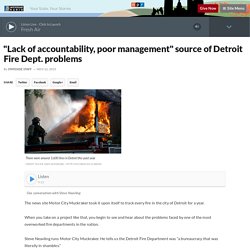 When you take on a project like that, you begin to see and hear about the problems faced by one of the most overworked fire departments in the nation. Steve Neavling runs Motor City Muckraker. He tells us the Detroit Fire Department was “a bureaucracy that was literally in shambles.” Neavling found that fire hydrants across the city were broken, the firefighters didn’t have purified air in their tanks, their trucks were breaking down, the whole system was a mess. “The city was literally burning down, and we had neighborhoods where houses were going up every night,” he says.

Neavling tracked an estimated 3,600 fires in Detroit, which he says is about average for the city. Instead, Neavling says he found the problems stemmed more from “a lack of accountability [and] poor management.” “And he took it on like a calling,” Neavling says.