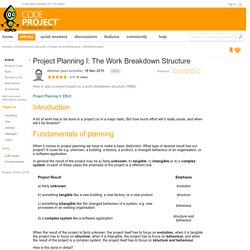 But how much effort will it really cause, and when will it be finished? Fundamentals of planning When it comes to project planning we have to make a basic distinction: What type of desired result has our project? In general the result of the project may be a) fairly unknown, b) tangible, c) intangible or d) a complex system. The Front End Engineering Spectrum: The Roles. Following up on my previous post about the generic types of front end engineers, this post will deal with the common roles that I see people trying to fill. 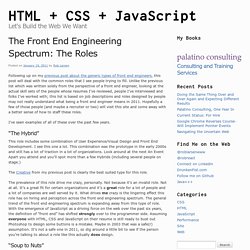 Unlike the previous list which was written solely from the perspective of a front end engineer, looking at the actual skill sets of the people whose resumes I’ve reviewed, people I’ve interviewed and folks I’ve worked with; this list is based on job descriptions and roles designed by people may not really understand what being a front end engineer means in 2011. Hopefully a few of those people (and maybe a recruiter or two) will visit this site and come away with a better sense of how to staff these roles. I’ve seen examples of all of these over the past few years. “The Hybrid” This role includes some combination of User Experience/Visual Design and Front End Development. The Creative from my previous post is clearly the best suited type for this role. The prevalence of this role drive me crazy, personally. “Soup to Nuts” Prototypes and Prototype Inheritance. In JavaScript, a prototype is a property of functions and of objects that are created by constructor functions. 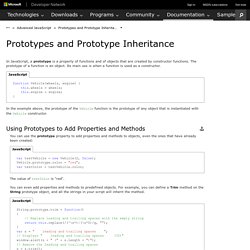 You can even add properties and methods to predefined objects. Using Prototypes to Derive One Object from Another with Object.create The Bicycle object has the properties wheels, engine, color, and pedals, and its prototype is Vehicle.prototype. Changing an Object's Prototype. Learning Advanced JavaScript. JavaScript Objects in Detail. JavaScript’s core—most often used and most fundamental—data type is the Object data type. 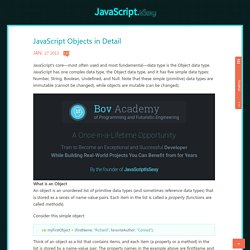 JavaScript has one complex data type, the Object data type, and it has five simple data types: Number, String, Boolean, Undefined, and Null. Note that these simple (primitive) data types are immutable (cannot be changed), while objects are mutable (can be changed). Our Career Paths and Courses Website Is Now Live New UPDATE: June 8, 2015 Enrollment for our Career Paths is well underway. The second cohort for Career Path 5: Modern Fullstack Developer is also full. Intro to javascript unit tests for client side. Unit tests for UI developers is a underground world and today we will explore this world a bit. 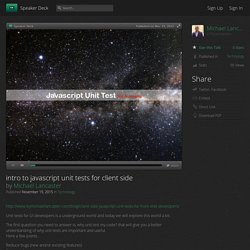 The first question you need to answer is, why unit test my code? That will give you a better understanding of why unit tests are important and useful. Here a few points. Reduce bugs (new and/or existing features) Serve as documentation Improve Software Design Reduce fear (you can write code with no fear of breaking something else) Unit tests are meant to be small but what I mean by that is, let's say you have a function called foo() that calls two other functions fooUno() and fooDos() each function has a specific logic/goal, let's also say that one of those functions inside foo() make a XHR request.. You don't want to make a XHR request because it's slow and the XHR might depend on something else from the system, but foo() require the data from the function that make XHR request, so what do you do? ECMAScript 6 modules: the final syntax. This blog post is outdated. 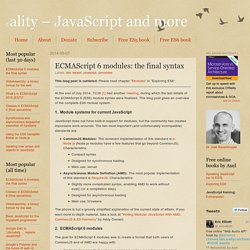 Please read chapter “Modules” in “Exploring ES6”. At the end of July 2014, TC39 [1] had another meeting, during which the last details of the ECMAScript 6 (ES6) module syntax were finalized. This blog post gives an overview of the complete ES6 module system. Module systems for current JavaScript JavaScript does not have built-in support for modules, but the community has created impressive work-arounds. CommonJS Modules: The dominant implementation of this standard is in Node.js (Node.js modules have a few features that go beyond CommonJS).