Title Page – Let's Get Writing! Culture - How to create an iconic image. What do you think of when you hear the word ‘icon’?

Liz Hurley in that Versace dress? David Bowie? Or perhaps a 12th Century devotional image of a crucified Christ? The truth is, all three of those examples – a famous photograph, a world-renowned musical artist and a piece of religious art – are icons. But the latter is the original; drawn from the Greek word eikōn, meaning ‘image’ or ‘likeness’, these were portrait-style images of important figures like Christ or the Virgin Mary that first appeared in the early centuries of Christianity. But then an image like that of Alaa Salah, protesting in Sudan, captures the global imagination. Break the mould What is it about Alaa Salah and this photograph that has made it so powerful?

Dr Tina Rivers Ryan, an art historian and curator specialising in modern and contemporary art, finds that the power lies in Salah’s posture. Kurt Vonnegut Offers 8 Tips on How to Write Good Short Stories (and Amusingly Graphs the Shapes Those Stories Can Take) You can't talk about American literature in the second half of the 20th century without talking about Kurt Vonnegut. 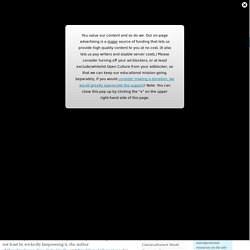 And since so many well-known writers today imbibed his influence at one point or another, you'd have to mention him when talking about 21st-century literature as well. Despite so fully inhabiting his time, not least by wickedly lampooning it, the author of Slaughterhouse-Five, Cat's Cradle, and Breakfast of Champions also had a few tendencies that put him ahead of his time. He worked wonders with the short story, a form in whose heyday he began his writing career, but he also had a knack for what would become the most social media-friendly of all forms, the list. In the video above, those abilities converge to produce Vonnegut's eight bullet points for good short-story writing: In the short lecture above Vonnegut gets more technical, sketching out the shapes that stories, short or long, can take.

Related Content: Propaganda Posters. Interpreting a visual source, like a propaganda poster, is very different to interpreting words on a page, which is the case with written sources. 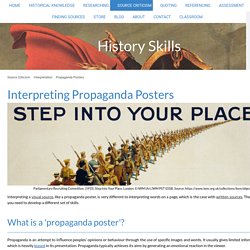 Therefore, you need to develop a different set of skills. Propaganda is an attempt to inﬂuence peoples’ opinions or behaviour through the use of specific images and words. It usually gives limited information which is heavily biased in its presentation. Propaganda typically achieves its aims by generating an emotional reaction in the viewer. For much of the twentieth century, public posters were a common way for governments to use propaganda to persuade their citizens. Propaganda in the First World War: Propaganda in the Second World War: Pixar & Khan Academy Offer a Free Online Course on Storytelling. It doesn’t take much to spark a good story. 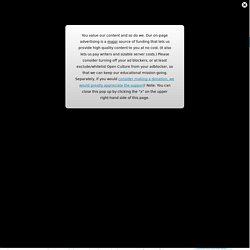 A tall man, a short woman, a setting that’s sterile to the point of soulless, and a couple dozen bananas… It practically writes itself! If you’re slow to recognize the potential in these extremely potent elements (culled from the above video’s opening shot), this free online course on storytelling, part of Khan Academy’s popular Pixar In A Box series, might help strengthen those slack storytelling muscles. The lessons will hold immense appeal for young Pixar fans, but adults students stand to gain too. Children are naturally confident storytellers. The Pixar directors and story artists drafted to serve as instructors for this course are as deft at encouragement as they are at their craft. Each short, example-packed video lesson is followed with an activity in which the viewer is asked to parse his or her favorite stories. One of the most compelling aspects of the series is hearing about the stories that matter deeply to the teachers. Argumentative Writing.

The W-Plot Novel Structure vs. Dramatica. By Glen C. 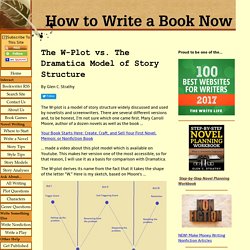 Strathy The W-plot is a model of story structure widely discussed and used by novelists and screenwriters. There are several different versions and, to be honest, I'm not sure which one came first. Words & Pictures - Online Magazine of SCBWI British Isles: Picture Book Basics - Understanding Format. In the first of a series of articles on picture book basics, Words & Pictures Illustration editor John Shelley offers some beginner guidelines to format. 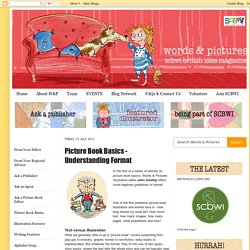 One of the first problems picture book illustrators and writers face is - how long should my book be? How much text, how many images, how many pages, what proportions and size? Text versus Illustration What we generally refer to as a "picture book" covers everything from pop-ups to e-books, graphic novels to non-fiction, baby books to sophisticated. But whatever the format, they fit into one of two types - story books, where the text tells the whole story and can be logically read without images, and true picture books, where the pictures and words combine together to tell the story. 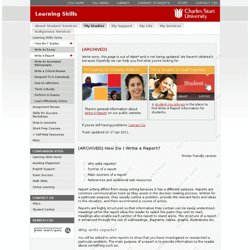 Printer friendly version Why write reports? Format of a report Main sections of a report References and additional web resources Report writing differs from essay writing because it has a different purpose. Reports are common communication tools as they assist in the decision making process. Reports are highly structured so that information they contain can be easily understood.