12 Facts About the Battle of Rorke’s Drift. On 22-23 January 1879, a British garrison of just over a hundred men – including sick and wounded – defended a hastily-fortified mission station from thousands of battle-hardened Zulu warriors. 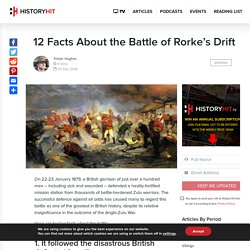 The successful defence against all odds has caused many to regard this battle as one of the greatest in British history, despite its relative insignificance in the outcome of the Anglo-Zulu War. Here are twelve facts about the battle. 1. It followed the disastrous British defeat at Isandlwana A contemporary painting of the Battle of Isandlwana. It was the worst defeat ever suffered by a modern army against a technologically inferior indigenous force. 2. Almost all of these men were British regulars of B Company, 2nd Battalion, 24th (2nd Warwickshire) Regiment of Foot (2nd/24th) under Lieutenant Gonville Bromhead. 3. These men were fierce warriors, well-versed in the art of war and under orders to show no mercy. Zulu warriors carrying their iconic ox-hide shields and firearms. 4. 5. 6. 7. 8. 9. 10. Internet History Sourcebooks Project. The National Archives. Home. Africa - Internet Sites with Primary Sources for History - LibGuides at BGSU University Libraries. African Activist Archive. 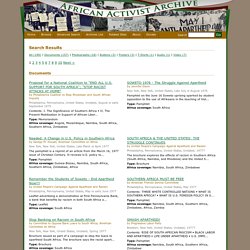 32 130 A49 84 al.sff.document.nusa197708. Africa - Internet Sites with Primary Sources for History - LibGuides at BGSU University Libraries. The racist signs South Africans had to look at every day for 40 years. As these signs showed, the restrictions intruded into all aspects of life. 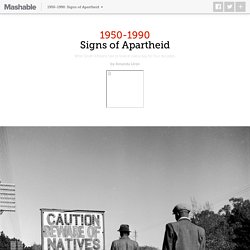 While Colored and Indian groups had access to some privileges, the sharpest distinction was between Black and White. The 1953 Separate Amenities Act of 1953 stated that separate facilities no longer had to be "substantially equal. " The result: Black-only bus stops serviced inferior Black-only buses. Black-only ambulances stopped at inferior Black-only hospitals. Black-only education was provided at inferior Black-only schools and universities. There were a handful of places where segregation didn't occur, notably drug-dealing nightclubs and churches. South African President P.W. The Stream - Soweto uprising: Forty years on. Why the Soweto protests erupted. The 30th anniversary of the Soweto uprising in South Africa is on 16 June: the day school pupils took to the streets of a township on the outskirts of Johannesburg, to protest against the standards of their education. 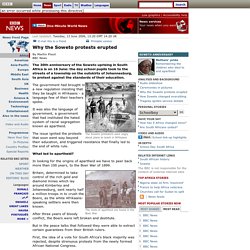 The government had brought in a new regulation insisting that they be taught in Afrikaans - a language few of their teachers spoke. It was also the language of government, a government that had instituted the hated system of racial segregation known as apartheid. The issue ignited the protests that soon went way beyond their education, and triggered resistance that finally led to the end of white rule. What led to apartheid? South Africa profile - Timeline. Cape Town Attraction. The PAC is formed.

An Africanist group led by Robert Sobukwe and Potlako Leballo were frustrated by the multi-racial character of the African National Congress (ANC). 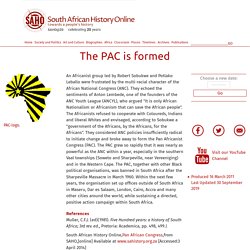 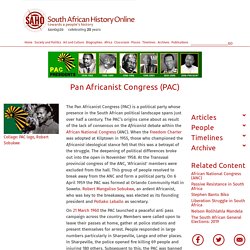 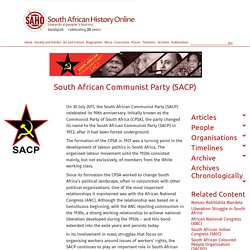 Initially known as the Communist Party of South Africa (CPSA), the party changed its name to the South African Communist Party (SACP) in 1953, after it had been forced underground. The formation of the CPSA in 1921 was a turning point in the development of labour politics in South Africa. The organised labour movement until the 1920s consisted mainly, but not exclusively, of members from the White working class. Since its formation the CPSA worked to change South Africa’s political landscape, often in conjunction with other political organisations. Freedom movement in South Africa: Its International impact by E.S Reddy. All national movements for freedom and justice spread ripples beyond their national boundaries. 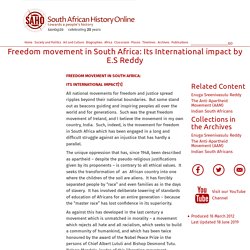 But some stand out as beacons guiding and inspiring peoples all over the world and for generations. Such was the great freedom movement of Ireland, and I believe the movement in my own country, India. Such, indeed, is the movement for freedom in South Africa which has been engaged in a long and difficult struggle against an injustice that has hardly a parallel. The unique oppression that has, since 1948, been described as apartheid – despite the pseudo-religious justifications given by its proponents – is contrary to all ethical values. Historical Papers, Wits University. Copyright Notice: All materials on the Historical Papers website are protected by South African copyright law and may not be reproduced, distributed, transmitted, displayed, or otherwise published in any format, without the prior written permission of the copyright owner. 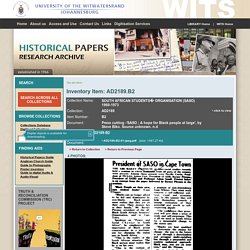 Disclaimer and Terms of Use: Provided that you maintain all copyright and other notices contained therein, you may download material (one machine readable copy and one print copy per page) for your personal and/or educational non-commercial use only. People using these records relating to the archives of Historical Papers, The Library, University of the Witwatersrand, Johannesburg, are reminded that such records sometimes contain material which is uncorroborated, inaccurate, distorted or untrue. Impact of Economic and Political Sanctions on Apartheid. SEE: Follow Up Article -The Interconnected Factors on Apartheid in South Africa SEE: Sports Diplomacy and Apartheid South Africa Author: Alexander Laverty Final Paper: MMW 6 Spring 2007 7 June 2007. 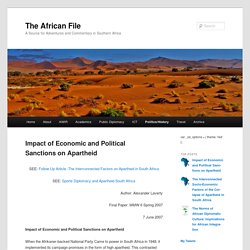 In 1969, Biko, a medical student, founded an organization for South Africa’s black students to combat the minority government’s racist apartheid policies and to promote black identity. In 1972, he helped organize the Black People’s Convention and in the next year was banned from politics by the Afrikaner government. Four years later, in September 1977, he was arrested for subversion. While in police custody in Port Elizabeth, Biko was brutally beaten and then driven 700 miles to Pretoria, where he was thrown into a cell. On September 12, 1977, he died naked and shackled on the filthy floor of a police hospital. Summary, Significance, & Facts. A history of Apartheid in South Africa. Background and policy of apartheid Before we can look at the history of the apartheid period it is necessary to understand what apartheid was and how it affected people. What was apartheid? South Africa’s Foreign Relations during Apartheid, 1948.

The position of South Africa in international affairs remained important throughout apartheid. The South African government needed to rely on the external community for certain products and as a market for South African products. Security was also provided by Western powers, and South Africa did not want complete isolation, although sometimes it seemed the easier option for the Prime Ministers. Apartheid: the beginning of the end. The End of Apartheid. Apartheid, the Afrikaans name given by the white-ruled South Africa's Nationalist Party in 1948 to the country's harsh, institutionalized system of racial segregation, came to an end in the early 1990s in a series of steps that led to the formation of a democratic government in 1994.

Years of violent internal protest, weakening white commitment, international economic and cultural sanctions, economic struggles, and the end of the Cold War brought down white minority rule in Pretoria. U.S. policy toward the regime underwent a gradual but complete transformation that played an important conflicting role in Apartheid's initial survival and eventual downfall. Although many of the segregationist policies dated back to the early decades of the twentieth century, it was the election of the Nationalist Party in 1948 that marked the beginning of legalized racism's harshest features called Apartheid. The Cold War then was in its early stages. U.S. Robert F. Kennedy: Day of Affirmation Address in South Africa (aka 'Ripple of Hope') - FULL. Confronting Apartheid Table of Contents. AAAH. (1955) The South African Freedom Charter. Colonialism and Resistance » African Studies Center. General. World politics explainer: the end of Apartheid. This article is part of our series of explainers on key moments in the past 100 years of world political history.

In it, our authors examine how and why an event unfolded, its impact at the time, and its relevance to politics today. Racial divisions emerged in South Africa as early as the 1600s, due to Dutch settlement. It began with the Europeans maintaining segregation and hierarchy between themselves, their slaves (many from Asia), and local African populations. Natal Colony. Anglo-Zulu Wars 1879-1896. HISTORY OF SOUTH AFRICA. Diary of Tshekisho Plaatje 1899-1900. South African Institute of Race Relations [SAIRR] 1892-1974. South African Institute of Race Relations, unrests, banishments, removals, 1950-1969. State vs Nelson Mandela and 9 others [Rivonia Trial] South African Institute of Race Relations, Trials 1958-1978. Zulu War Treaty 1879. Copyright Notice: All materials on the Historical Papers website are protected by South African copyright law and may not be reproduced, distributed, transmitted, displayed, or otherwise published in any format, without the prior written permission of the copyright owner.

Disclaimer and Terms of Use: Provided that you maintain all copyright and other notices contained therein, you may download material (one machine readable copy and one print copy per page) for your personal and/or educational non-commercial use only. Travels in South Africa in the Years 1849 to 1857. László Magyar (1814-64) was a Hungarian explorer who lived for 17 years in Angola and made important contributions to the study of the geography and ethnography of equatorial Africa.

He was trained as a naval officer and served in the naval forces of Austria and Argentina. Zulu Chief, South Africa. Austral Africa: Losing It or Ruling It; Being Incidents and Experiences in Bechuanaland, Cape Colony, and England. John Mackenzie (1835–99) was a Scottish missionary who was sent by the London Missionary Society to South Africa in 1858. He lived at Shoshong in present-day Botswana in 1862–76.

Mackenzie believed that the Ngwato and other African peoples with whom he worked were threatened by Boer freebooters encroaching on their territory from the south, as well as by politicians such as Cecil Rhodes who wanted to see extensive territories to the north annexed to the British Cape Colony. He thus began a campaign for the establishment of what became the Bechuanaland Protectorate, to be ruled directly from Britain. Sketches Representing the Native Tribes, Animals, and Scenery of Southern Africa: From Drawings Made by the Late Mr. Samuel Daniell.

Samuel Daniell (1775–1811) was an English painter and draughtsman who arrived in South Africa in December 1799. Men, Mines and Animals in South Africa. Lord Randolph Henry Spencer Churchill (1849–95), the father of Prime Minister Winston Churchill, was an important British politician of the late 19th century. Adventures in Swaziland: the Story of a South African Boer. The Transvaal and Bechuanaland. Treatment of Natives in the German Colonies. Partition of Africa. RAAI - Ross Archive of African Images. Historical Papers, Wits University. 16th-Early 20th Century Maps of Africa.