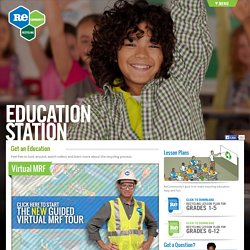 Ash - The solid residue that remains after a fuel or solid waste has been burned. Biodegradable - Waste material, which is capable of being broken down, usually by bacteria, into basic elements. Most organic wastes, such as food and paper,are biodegradable. Earth Exploration Toolbook. Awarded Science Magazine's Science Prize for Online Resources in Education (SPORE), September 30, 2011 AAAS Press Release What is the Earth Exploration Toolbook? 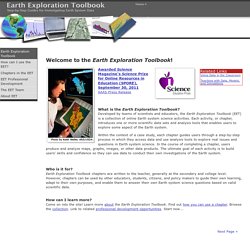 Developed by teams of scientists and educators, the Earth Exploration Toolbook (EET) is a collection of online Earth system science activities. Each activity, or chapter, introduces one or more scientific data sets and analysis tools that enables users to explore some aspect of the Earth system. Project Noah. The Water Cycle. Water Island Game. The Water Cycle - TeacherTube. Warnings from the Ice. Antarctic Almanac Ice Antarctica has some seven million cubic miles of ice, representing some 90 percent of the world's total. 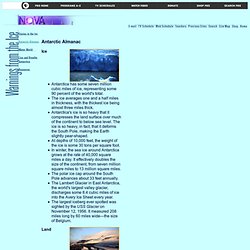 The ice averages one and a half miles in thickness, with the thickest ice being almost three miles thick. Scientific Committee on Antarctic Research) » Antarctic Education. Antarctica weblinks. These fun and informative websites help you to learn about Antarctica. 24 November 2006 | Updated 14 October 2011. 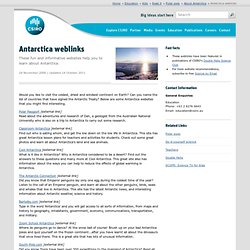 Antarctica Interactive Map, Discover Antarctica. Learn Science at Nature. Overview Effect-Video-Society and our relationship to the environment. Space - Digital Education Resources. All Time-lapse sequences were taken by the astronauts onboard the International Space Station (ISS) (Thanks guys for making this available to the public for use!) 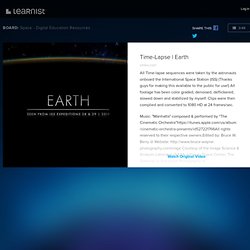 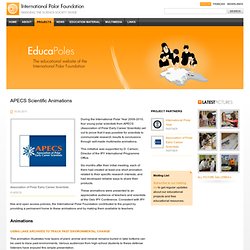 This initiative was supported by D. Carlson, Director of the IPY International Programme Office. Six months after their initial meeting, each of them had created at least one short animation related to their specific research interests, and had developed reliable ways to share their products. These animations were presented to an appreciative audience of teachers and scientists at the Oslo IPY Conference. 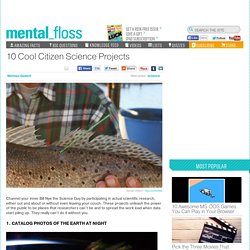 These projects unleash the power of the public to be places that researchers can’t be and to spread the work load when data start piling up. Teacher Resources. Environmental Lesson Plans. Ecological Society of America. Teaching with GIS in the Geosciences. Created by Brian Welch, Dept. of Environmental Studies, St. 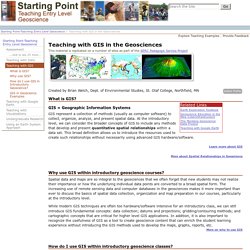 Olaf College, Northfield, MN What is GIS? GIS = Geographic Information Systems GIS represent a collection of methods (usually as computer software) to collect, organize, analyze, and present spatial data. At the introductory level, we can consider the broader concepts of GIS to include any methods that develop and present quantitative spatial relationships within a data set. 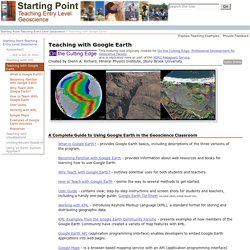 Richard, Mineral Physics Institute, Stony Brook University A Complete Guide to Using Google Earth in the Geoscience Classroom. Sciencecourseware.org. Education and Public Outreach. The Environmental Literacy Council. Environmental Science Institute. According to the National Research Council, the United States trails behind more than a dozen other nations in the percentage of 24-year olds who earn degrees in natural sciences or engineering as opposed to other degrees. 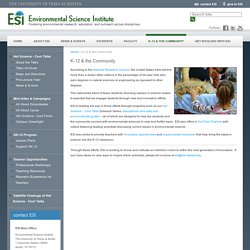 The nationwide trend of fewer students choosing careers in science makes it essential that we engage students through new and innovative efforts. ESI is leading the way in those efforts through programs such as our Hot Science – Cool Talks Outreach Series, educational mini-sites and environmental guides – all of which are designed to help the students and the community connect with environmental sciences in new and fruitful ways. ESI also offers a YouTube Channel with videos featuring leading scientists discussing current issues in environmental science. ESI also works to provide teachers with innovative opportunities and inquiry-based resources that help bring the latest in science into the K-12 classroom. NOAA: Ocean Explorer. WW2010 (the weather world 2010 project): Celebrating 15 Years! Editor's Note: We first started work on this web site back in 1995 when the web was still a new thing.

In thinking of all the "futuristic" features of all sorts that we had been tasked to includ in it, we jokingly named it Weather World (perhaps after Disney World, or maybe Wally World in the Chevy Chase film). Windows to the Universe.