John Allen Chau: Do missionaries help or harm? Image copyright Getty Images "You guys might think I'm crazy in all this... 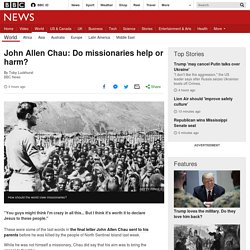 But I think it's worth it to declare Jesus to these people. " These were some of the last words in the final letter John Allen Chau sent to his parents before he was killed by the people of North Sentinel Island last week. While he was not himself a missionary, Chau did say that his aim was to bring the gospel to the tribe. And his attempts to do so have brought into focus the hundreds of thousands of Christians around the world spreading their faith. But who are these missionaries? What is a missionary? While other religions have sent missionaries around the world, none are more widespread or well-known than Christian missionaries. Missionaries of all Christian creeds cite a passage in the Bible, the most famous of which appears in the Book of Matthew, in which Jesus asks his followers to "make disciples of all nations". Religious people were often at the vanguard of colonial efforts.

What do missionaries do? How The West Was Done - Western Genre Documentary Short Film. NPR Choice page. 01.04.10: Debunking the Myth of the American West. Introduction When we think of the American West, we often envision a cowboy saving the day and riding off into the sunset. 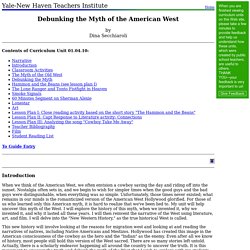 Nostalgia often sets in, and we begin to wish for simpler times when the good guys and the bad guys were distinguishable, when everything was so simple. Unfortunately, those times never existed; what remains in our minds is the romanticized version of the American West Hollywood glorified. For those of us who learned only this American myth, it is hard to realize that we've been lied to. My unit will help uncover this myth of the West. This new history will involve looking at the reasons for migration west and looking at and reading the narratives of natives, including Native Americans and Mestizos. 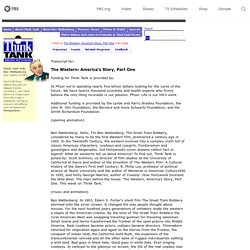 We have twelve thousand scientists and health experts who firmly believe the only thing incurable is our passion. Additional funding is provided by the Lynde and Harry Bradley Foundation, the John M. (opening animation) Ben Wattenberg: Hello, I’m Ben Wattenberg. (music and animation) Ben Wattenberg: In 1903, Edwin S. Holly George-Warren: Basically it was really a pretty brief time period, which makes it hard to believe when you think about all those Westerns we’ve seen over the years. Ben Wattenberg: But there are films that are set later than 1880, aren’t there? Phil Loy: Yes. Scott Simmon: Every state can claim its time as the frontier so that there are Westerns set in Massachusetts and certainly you know Last of the Mohican’s being set in New York. Clint Eastwood and the American West. Editor’s note: On June 23 and 24, the museum, in partnership with Warner Bros. 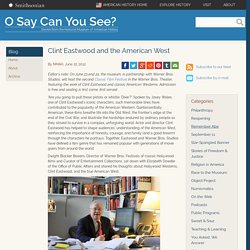 Studios, will host the second Classic Film Festival in the Warner Bros. Theater, featuring the work of Clint Eastwood and classic American Westerns. Admission is free and seating is first come, first served. “Are you going to pull those pistols or whistle ‘Dixie’?” Spoken by Josey Wales, one of Clint Eastwood’s iconic characters, such memorable lines have contributed to the popularity of the American Western.

Dwight Blocker Bowers, Director of Warner Bros. Dwight Blocker Bowers Q. A. Q. A. Q. How the Hollywood Western Shaped America: From Stagecoach to Djan. When a scowling bandit aimed a bullet straight at the audience in the final frames of the 1903 blockbuster The Great Train Robbery, it signaled the fade-out of a groundbreaking silent film and the beginning of our fascination with the movies’ most enduring genre, the Western. 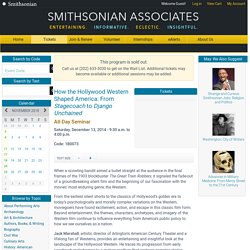 From the earliest silent shorts to the classics of Hollywood’s golden era to today’s psychologically and morally complex variations on the Western, moviegoers have found excitement, action, and escape in this classic film form. Beyond entertainment, the themes, characters, archetypes, and imagery of the Western film continue to influence everything from America’s public policy to how we see ourselves as a nation. Jack Marshall, artistic director of Arlington’s American Century Theater and a lifelong fan of Westerns, provides an entertaining and insightful look at the landscape of the Hollywood Western. 9:30 to 10:30 a.m.