VARINDIA provides the latest Information Technology (IT) news, Telecommunication , Cloud computing and Computer product reviews from India and all over world. 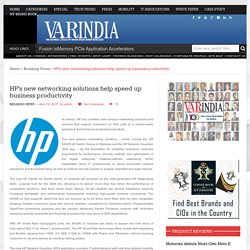 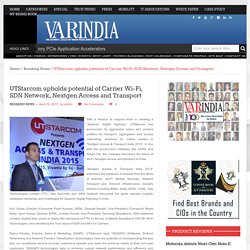 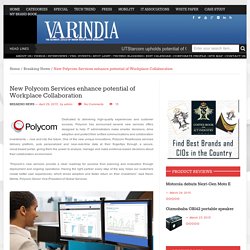 One of the new unique innovations, Polycom RealAccess services delivery platform, puts personalized and near-real-time data at their fingertips through a secure, cloud-based portal, giving them the power to analyze, manage and make evidence-based decisions about their collaboration environment. “Polycom’s new services provide a clear roadmap for success from planning and evaluation through deployment and ongoing operations. Having the right partner every step of the way helps our customers create better user experiences, which drives adoption and faster return on their investment,” said Navin Mehta, Polycom Senior Vice-President of Global Services. 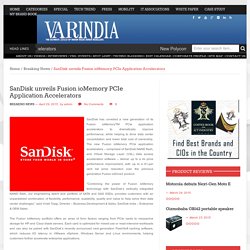 Atos has opened the IT Integration Testing Lab for the Rio de Janeiro 2016 Olympic and Paralympic Games. 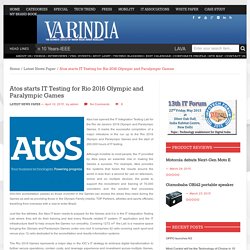 It marks the successful completion of a major milestone in the run up to the Rio 2016 Olympic and Paralympic Games and the start of 200,000 hours of IT testing. Although invisible to most people, the IT provided by Atos plays an essential role in making the Games a success. For example, Atos provides the systems that beam the results around the world in less than a second for use on television, online and on multiple devices; the portal to support the recruitment and training of 70,000 volunteers and the solution that processes 300,000 accreditation passes so those involved in the Games can access the areas they need during the Games as well as providing those in the Olympic Family (media, TOP Partners, athletes and sports officials) travelling from overseas with a visa to enter Brazil.

The Rio 2016 Games are a key milestone in the transformational shift to the cloud. Skype Translator Now includes Italian and Mandarin. Skype makes it easier for customers to connect with people around the world, no matter where they are and what language they speak. 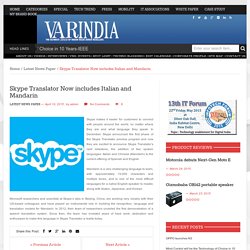 In December, Skype announced the first phase of the Skype Translator preview program and now they are excited to announce Skype Translator’s next milestone, the addition of two spoken languages: Italian and Chinese (Mandarin) to the current offering of Spanish and English. Mandarin is a very challenging language to learn, with approximately 10,000 characters and multiple tones, and is one of the most difficult languages for a native English speaker to master, along with Arabic, Japanese, and Korean. Amazon announces investments in Telangana. Amazon Seller Services (ASSPL) has announced fresh investments in the state of Telangana with the opening of a Fulfilment Centre (FC), spread over 280,000 square feet near Kottur, on the outskirts of Hyderabad. 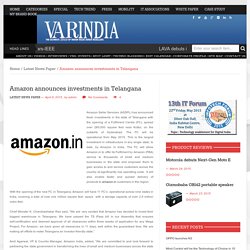 The FC will be operational from May 2015. This is the largest investment in infrastructure in any single state, to date, by Amazon in India. The FC will allow Amazon.in to offer its Fulfilment by Amazon (FBA) service to thousands of small and medium businesses in the state and empower them to gain access to and service customers across the country at significantly low operating costs. It will also enable faster and quicker delivery of products to amazon.in customers in the region. With the opening of the new FC in Telangana, Amazon will have 11 FC’s operational across nine states in India, covering a total of over one million square feet space with a storage capacity of over 2.5 million cubic feet. 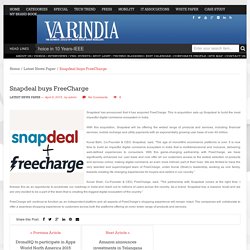 This is acquisition sets up Snapdeal to build the most impactful digital commerce ecosystem in India. With this acquisition, Snapdeal will be offering the widest range of products and services, including financial services, mobile recharge and utility payments with an exponentially growing user base of over 40 million. Kunal Bahl, Co-Founder & CEO, Snapdeal, said, “The age of monolithic ecommerce platforms is over.

It is now time to build an impactful digital commerce ecosystem in India that is multidimensional and inclusive, delivering well-defined experiences to consumers. With this game-changing partnership with FreeCharge, we have significantly enhanced our user base and now offer all our customers access to the widest selection of products and services online, making digital commerce an even more intrinsic part of their lives. Cisco secures customers with new Advanced Malware Protection Capabilities. Cisco has unveiled a host of new capabilities and services that give security professionals extensive intelligence and analysis on potential compromises and solutions to protect against, respond to and recover from attacks. 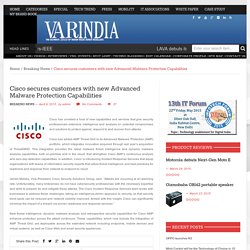 Cisco has added AMP Threat Grid to its Advanced Malware Protection (AMP) portfolio, which integrates innovation acquired through last year’s acquisition of ThreatGRID. This integration provides the latest malware threat intelligence and dynamic malware analysis capabilities, both on-premise and in the cloud, that strengthen Cisco AMP’s continuous analysis and zero-day detection capabilities. In addition, Cisco is introducing Incident Response Services that equip organizations with teams of information security experts that utilize threat intelligence and best practices for readiness and response from network to endpoint to cloud. 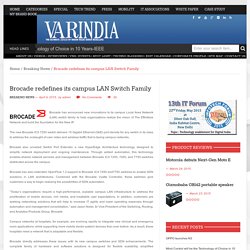 The new Brocade ICX 7250 switch delivers 10 Gigabit Ethernet (GbE) port density for any switch in its class to address the onslaught of user video and wireless traffic that is taxing campus networks. Brocade also unveiled Switch Port Extender, a new HyperEdge Architecture technology, designed to simplify network deployment and ongoing maintenance. Through added automation, this technology enables shared network services and management between Brocade ICX 7250, 7450, and 7750 switches distributed across the campus. Brocade has also extended OpenFlow 1.3 support to Brocade ICX 7450 and7750 switches to enable SDN solutions in LAN architectures. Combined with the Brocade Vyatta Controller, these switches give customers a way to begin realizing the possibilities of SDN automation. Share this Post: Accenture Video Solution enables STAR to deliver hotstar. Accenture has helped Star India to develop, launch and deliver its over-the-air programming to India’s online, digitally-enabled consumers on almost any mobile device.

Called hotstar, the innovative service debuted on January 7 through Star India’s wholly-owned subsidiary, and when fully deployed will be available to India’s entire population. The innovative hotstar service, built on the Accenture Video Solution (AVS) software platform, will be funded primarily through advertising, using the platform’s new digital advertising functions. Taking advantage of a fully cloud-based infrastructure, hotstar will be able to serve the entire country with a catalogue of more than 45,000 movies and television series. Leveraging AVS, Star can deliver broadcast-quality content to consumers on a wide variety of devices over Wi-Fi, 4G, 3G and 2G networks, including those with limited bandwidth resources such as 2G feature phones.

D-Link spreads “D-Link Direct Service” to pan India Customers. D-Link has made a major breakthrough in customer service support by introducing the revolutionary “D-Link Direct Service – DDS” during mid-2013. Following the overwhelming response to DDS, the company has now decided to extend this service to customers present in C & D Class cities as well.

NASSCOM elects BVR Mohan Reddy as its new Chairman. National Association of Software and Services Companies (NASSCOM) has announced that the Executive Council has elected BVR Mohan Reddy, Founder & Executive Chairman, Cyient Ltd (formerly Infotech Enterprises), as the Chairman of NASSCOM for 2015-16. BVR Mohan Reddy has been a member of the NASSCOM’s Executive Council and will take on the new role from April 9, 2015. He succeeds R. Chandrasekaran, Executive Vice-Chairman, Cognizant India, who served as Chairman of NASSCOM for 2014-15. The Executive Council has also announced the election of CP Gurnani, CEO & MD of Tech Mahindra, as Vice-Chairman of NASSCOM for 2015-16. Lenovo A7000 launched exclusively with Flipkart. The much-anticipated Lenovo A7000 is finally here in India. Lenovo has launched the new smartphone exclusively with Flipkart.

The 4G/LTE smartphone sports a 64-Bit 1.5GHz Octa-Core processor and 2GB DDR3 RAM for smooth gaming, a great multimedia experience and lag-free multitasking. Featuring a brilliant 13.97 (5.5) cms HD display with ultra-wide viewing angles, the A7000 ensures clarity and accurate colour reproduction. The A7000 also features the all-new Dolby Atmos technology providing moving audio technology for an unparalleled acoustic experience. Vodafone reinforces its position in Mumbai with better network and retail presence. With a ‘Customer First’ approach, Vodafone India, has invested over INR1,000 crore on ramping up network and distribution and retail presence in Mumbai circle over the past 12 months (April 2014–March 2015).

Already, the preferred mobile services provider in terms of Subscriber base, Revenue Market Share and Retail touch points, Vodafone has been focussing on closer engagement and enhancing customer experience in an endeavour to be future ready. Pursuing an accelerated growth strategy since April 2014, Vodafone has expanded its network footprint by adding over 1,200 new 3G and 2G sites across Mumbai in the past 12 months. During this period, Vodafone has increased its exclusive retail footprint by rolling out 7 Vodafone Stores and 27 Vodafone Mini Stores. With this ramp-up, Vodafone has further extended its leadership in Mumbai across relevant industry parameters – network coverage, subscriber base, retail footprint and revenue market share (RMS). Share this Post: Videocon d2h rings the Opening Bell at NASDAQ.

Videocon d2h has rung the opening bell at the prestigious Nasdaq stock market in New York. Videocon d2h became the first Indian private company since the year 2000 to list overseas, issuing ADR worth $325 million to the public. To mark the celebrations, Rajkumar Dhoot, Member of Parliament – India & Saurabh Dhoot, Managing Director of Videocon d2h visited the Nasdaq Market Site at Times Square and rang the symbolic opening bell. Saurabh Dhoot – Managing Director, Videocon d2h said, “Our listing on the NASDAQ Stock Exchange is a major corporate milestone for the entire Indian Media industry not just Videocon d2h and a testament to the tremendous progress we have made under the Digital India vision of our Hon’ble Prime Minister. Spice Mobiles becomes Associate Sponsor of Rajasthan Royals. Spice Mobiles has announced its associate sponsorship for the Rajasthan Royals (RR) team in the Indian Premier League’s eighth season which starts from8th of April, 2015. As a part of the sponsorship agreement, the logo of Spice Mobiles will occupy the leading side position on Rajasthan Royal’s playing trousers.

NRC Agro speeds up growth graph with Tally.ERP 9 and Tally.Server 9. NRC Agro has announced automation of all its business operations by using the Tally.ERP 9 software package from Tally (TSPL). The company is now covering a range of operations, from account and inventory management to tracking all the areas of outstanding and product movement with greater accuracy, using Tally.ERP 9. HP Helion Rack makes deployment of OpenStack Technology-based Private Clouds easy. Panasonic along with RCOM brings Video Surveillance for Enterprises. Oracle witnesses demand in Cloud Solutions. Oracle has announced that it is witnessing unprecedented demand for its cloud solutions in the country. Lenovo strengthens relationship with Partners by introducing DRS 2.0.