Home. Civil War fashion show in SW Pa. to revisit 1860s: EBSCOhost. Civil War Womens Clothing: Civil War Dresses, Hair Jewelry, and the Snood - Visit Gettysburg. The Civil War womens clothing outfits worn by the female citizens of Gettysburg and Victorian women visiting after the battle are hard for us to imagine in the modern age of shorts and tank tops. 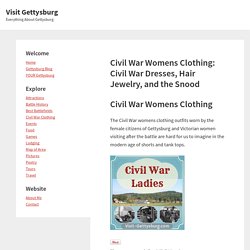 There were specialized Civil War dresses every occasion: mourning gowns, ball gowns, riding habits, etc. The Hoop Skirt Civil War Southern belles are best known for their hoops. Women's Clothing of the South in the American Civil War. The clothing worn during the American Civil War (1861 - 1845) is a popular costume for Halloween and for Civil War reenactors. 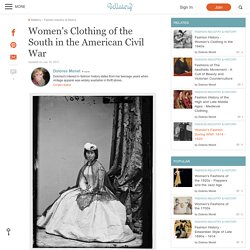 In general, the fashions worn before and during the Civil War are Victorian styles, but the clothing worn by women in the Confederate States take on a slightly different consideration. Cotton was produced in the American South, but the textile mills that manufactured fabric were located in the northern states. The blockade of southern ports by northern forces prevented the importation of European as well as American fabrics.

Though blockade runners managed to move some goods through, those imports were few and far between. Fashion in the Civil War.