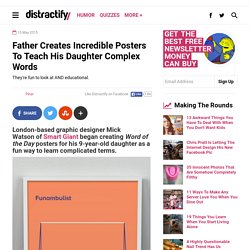 Dressing the Woman in Gold: The Unknown Bohemian Designer behind the Paintings. Even though you might not have his name on the tip of your tongue like Van Gogh or Monet, you know a Gustav Klimt painting when you see one. 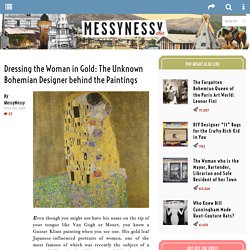 His gold leaf Japanese-influenced portraits of women, one of the most famous of which was recently the subject of a major Hollywood film (Woman in Gold), dressed in vibrant, multicolored and almost psychedelic prints, saw him become one of the most prominent painters of his era. His works sell today for hundreds of millions of dollars, some of the highest prices ever recorded for individual works of art.

But were those mosaic-like dresses real? Who was behind the designs worn by the beautiful Viennese society women in Klimt’s paintings? Masculinity Is Killing Men: The Roots of Men and Trauma. “The three most destructive words that every man receives when he’s a boy is when he’s told to 'be a man,'” —Joe Ehrmann, coach and former NFL player If we are honest with ourselves, we have long known that masculinity kills men, in ways both myriad and measurable. 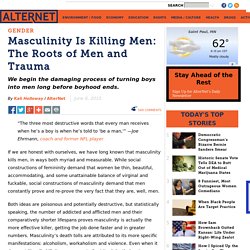 While social constructions of femininity demand that women be thin, beautiful, accommodating, and some unattainable balance of virginal and fuckable, social constructions of masculinity demand that men constantly prove and re-prove the very fact that they are, well, men. Both ideas are poisonous and potentially destructive, but statistically speaking, the number of addicted and afflicted men and their comparatively shorter lifespans proves masculinity is actually the more effective killer, getting the job done faster and in greater numbers. How To Relieve Your Sinus Infection In 20 Seconds. The Likely Cause of Addiction Has Been Discovered, and It Is Not What You Think

It is now one hundred years since drugs were first banned — and all through this long century of waging war on drugs, we have been told a story about addiction by our teachers and by our governments.

This story is so deeply ingrained in our minds that we take it for granted. It seems obvious. It seems manifestly true. Sitting Isn’t the Issue—Static Is – Steelcase. By Ken Tameling Our vilification of sitting has gone too far. 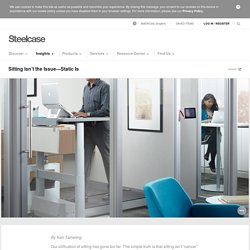 The simple truth is that sitting isn’t “cancer” and it’s not killing us. Sitting is an important part of the day, and one that we cannot practically—and shouldn’t want to—eliminate. In some cases, it’s “how” we might sit, in static postures all day, and the length of time that we sit in those static postures that is impacting our wellbeing and productivity. Rather than focusing on sitting as a problem, we should have a broader view—that a healthy day finds a balance between sitting, standing, and walking. This sit, stand, walk philosophy embraces the idea that our bodies aren’t meant to stay in just one posture, and reminds me to keep moving between work zones during the day.

Movement during the day shouldn’t only happen when we change, say, from sit to stand. SA government’s response to xenophobia a farce. By Prof Kopano Ratele In the midst of the xenophobic violence that has erupted in South Africa, absurdity has once again begun to overrun the country. 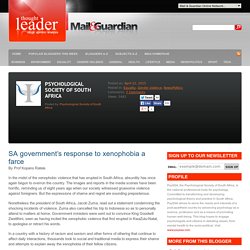 The images and reports in the media scenes have been horrific, reminding us of eight years ago when our society witnessed gruesome violence against foreigners. But the expressions of shame and regret are sounding preposterous. Nonetheless the president of South Africa, Jacob Zuma, read out a statement condemning the shocking incidents of violence. What it Means To be An Empath. A few weeks ago I wrote an article called A Narcissist and an Empath Walk into a Bar about my marriage to an abusive man. 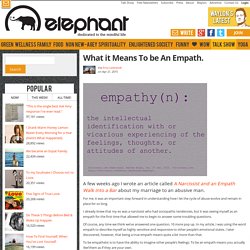 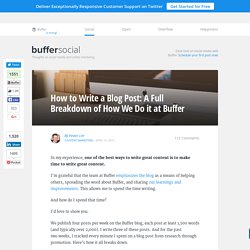 I’m grateful that the team at Buffer emphasizes the blog as a means of helping others, spreading the word about Buffer, and sharing our learnings and improvements. This allows me to spend the time writing. How to Organize Your Pinterest Boards - I Heart Planners. The Addiction We Don’t Discuss. Via Wendy Reeseon Feb 8, 2015 Shortly after discovering a friend had committed suicide, I stumbled through an illusion that I had been playing in for many years. 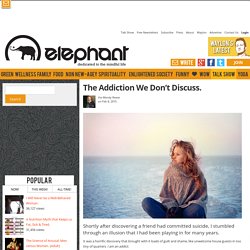 It was a horrific discovery that brought with it loads of guilt and shame, like unwelcome house guests in too tiny of quarters. I am an addict. This was an addiction like nothing I had heard of before. I knew plenty about substance abuse, sexual addition, food addictions, even internet addictions. Chris Hani murder revisited - ZAM.

Dulcie September and Anton Lubowski Clive Derby-Lewis, co-conspirator in the murder of South African freedom struggle hero Chris Hani in 1993, was once again denied parole, for the third time, in January this year. 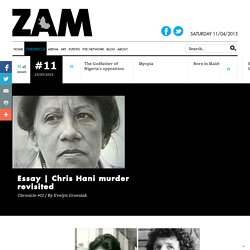 Whilst Chris Hani's family and many old friends and comrades applaud the decision to 'let him rot', some ask how much Derby-Lewis actually knew about the murder. One of these voices is Evelyn Groenink, who investigated the Chris Hani murder case -and several others- for years. Her research, which unearthed arms trade links to both the Hani and September murders, was published only in the Netherlands, in a language largely foreign to the international community. The history of a story that could not be told. There is a Terrifying Silence in the Storm over Statues. Rhodes Statue, in its current position on the UCT campus. Photo by Yusuf Omar, UCT.ac.za The reason is simple: the overwhelming majority of South Africans, black and white, believe in a middle path somewhere between reconciliation and social justice. Three free systems and tools you can start using today - k a y l a r o s e . c o. I was so thrilled when Val creator of Systems Finishing School and Aspire and Grow asked if I wanted to be a part of the 12 days of systems challenge.

8 Ways We Drain the Juice Out of Love. ~ Tamara Star. Buzz Aldrin took a cooler photo than you did at Stonehenge. Rare video captures volcanic lightning from an exploding volcano. Two G's In A Pod · Two G's In A Pod – iono·fm. Gateway. 9 Reasons to Drink Lemon Water in the Morning. The Likely Cause of Addiction Has Been Discovered, and It Is Not What You Think  Amy Cuddy: Your body language shapes who you are. 20 words that once meant something very different. Words change meaning over time in ways that might surprise you. We sometimes notice words changing meaning under our noses (e.g., unique coming to mean “very unusual” rather than “one of a kind”) — and it can be disconcerting. Science Shows Something Surprising About People Who Love to Write.

4 Ways to Deal with Your Emotional Black Hole. The Emotional Black Hole – also known as hitting the self destruct button, self sabotaging goals, aspirations and dreams and existing in a negatively charged emotional state that makes life nearly unbearable for yourself and everyone around you.