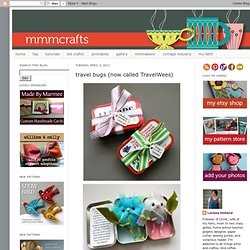 My friend is now in Brazil. Olá, meu amigo Robyn, over the equator and far away! I sent a package to her kids before they left the US because I thought it might be nice for her older two to have a travel sized buddy like their younger brother, Asher. Something to play with on the long airplane ride. I had all this fur left over from the beards.

I think they ended up kind of Seussy looking (like they might live in a truffala tree), and probably a little too cutesy for her older boy, but he can secretly like it. I consume a lot of Altoids® Curiously Strong Mints (where's my sponsorship?) Travel Bugs bring their own maps and their own food. Crystal Egg Geodes - Martha Stewart Easter. Geodes can be grown without using egg dye. 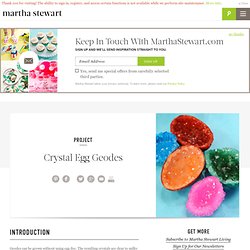 The resulting crystals are clear to milky white, like quartz. While large chicken eggshells are suggested in this process, larger eggshells can be used. Simply increase the size of the plastic or glass container and double or triple the amounts of dye (1 packet), alum (3/4 part), and water (2 parts) used to create the growing solution. This Easter craft from Jim "Figgy" Noonan doubles as a science project, offering an opportunity to show kids the crystallization process at work. To make a fluorescent variation for Halloween, substitute the water and egg dye solution with glow water. Ingeniously re-used products. Design is not always about expensive branded items. 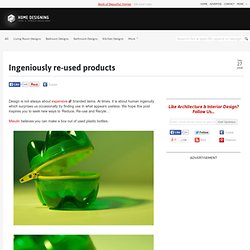 At times, it is about human ingenuity which surprises us occasionally by finding use in what appears useless. We hope this post inspires you to seek new ways to ‘Reduce, Re-use and Recyle…’ Mieulin believes you can make a box out of used plastic bottles. Fazendo Arte does not like to throw away old floppies. She likes to use them as binds for notepads. Infact, old computer accessories can be creatively used in different ways: Dew" It Yourself Jewelry Stand. Given that title and my penchant for puns, I'm guessing it will take you guys exactly 3.7 seconds to guess what my new jewelry stand is made from: Aw, you only needed two seconds, didn't you? 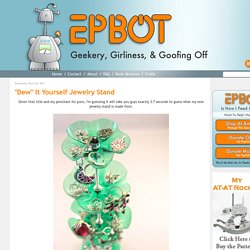 I knew it. Yep, this pretty green number is made from four plastic Mountain Dew bottles and exactly $3.72 worth of materials from the hardware store. Not too shabby. It also only took about two hours to make, so let's get to it! First, collect your bottles. Diy {jenga keychain} A while back ago I purchased a Jenga wood block game on sale for just $3.99. 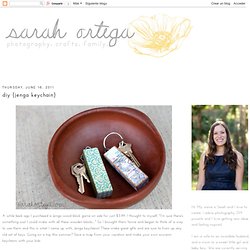 I thought to myself, "I'm sure there's something cool I could make with all these wooden blocks... " So I brought them home and began to think of a way to use them and this is what I came up with, Jenga keychains! These make great gifts and are sure to liven up any old set of keys. Going on a trip this summer? Save a map from your vacation and make your own souvenir keychains with your kids. Here's what you'll need: -wooden block -decorative paper (scrapbook page, map, sheet music, pretty wrapping paper, pages of a book, ect...) Festive Stars made from Recycled Drinks Cans. November 1st, 2011 I’m preparing for a couple of craft fairs (details coming soon) at the moment and decided to have a go at making some Festive decorations by recycling some drinks cans I’ve been collecting. 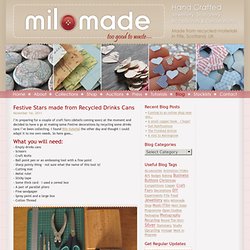 I found this tutorial the other day and thought I could adapt it to me own needs. So here goes… What you will need: - Empty drinks cans - Scissors - Craft Knife - Ball point pen or an embossing tool with a fine point - Sharp pointy thing – not sure what the name of this tool is! Step One. Www.wooz.dk/?page_id=2611. Først skal du have fat i perler, hvis du ikke allerede har dem, du kan købe dem billigt i f.eks. 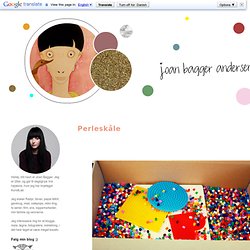 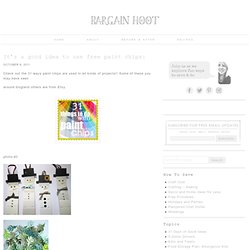 Some of these you may have seen around blogland others are from Etsy. 1.PaintswatchWall2.SnowmanOrnaments3.cut leaves 4. Dyed Buttons. Dyeing buttons and beads is fun and easy to do, enabling you to get the exact color you want whether using the buttons and beads on a coat, a pillow cover or in a necklace.

They also look beautiful in a vase as part of a flower arrangement, helping the flowers to stand tall. Most buttons and beads are made out of nylon and Rit is one of the few dyes that will color these materials (it also dyes wood buttons!). That means you can transform plain buttons and beads into colorful accents that match or coordinate with whatever you are making. Prep, dye and rinse time: 30 minutes.