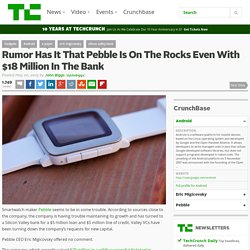 According to sources close to the company, the company is having trouble maintaining its growth and has turned to a Silicon Valley bank for a $5 million loan and $5 million line of credit. Valley VCs have been turning down the company’s requests for new capital. Pebble CEO Eric Migicovsky offered no comment. The company, which recently raised $20 million in a wildly successful Kickstarter, currently has 150 employees and is still hiring. Even with the crowdfunding infusion – which amounts to about $18 million after fees – the company is shopping for VC money in order to maintain growth and turned to a bank loan “in order to stay afloat.” The source noted that many employees were unhappy with the direction of the company as it turns to face competitors from Apple, Android, and outside.

Wearable Technology Startups Leading the Industry - BusinessBee. A recent survey suggests small business owners are more optimistic about their businesses than they have been in five years. 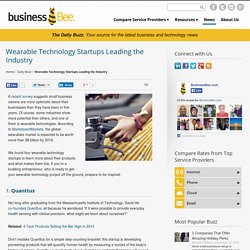 Of course, some industries show more potential than others, and one of them is wearable technologies. According to MarketsandMarkets, the global wearables market is expected to be worth more than $8 billion by 2018. We found four wearable technology startups to learn more about their products and what makes them tick. OMSignal smart shirts make me doubt smart clothing market. Home » Health & Fitness » OMSignal smart shirts make me doubt the smart clothing market I ordered my OMSignal shirt from the crowd-funding launch page back in May 2014. 8 months and 50 “exciting updates from the founders” later, I received it. 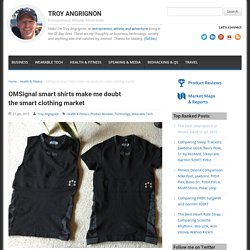 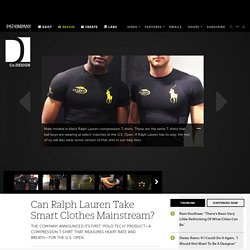 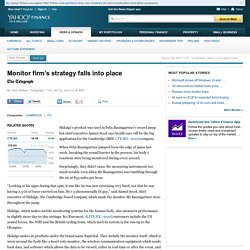 When Felix Baumgartner jumped from the edge of space last week, breaking the sound barrier in the process, his body’s reactions were being monitored during every second. Surprisingly, they didn’t cause the measuring instruments too much trouble even when Mr Baumgartner was tumbling through the air at 833 miles per hour. Toray follows Heattech hit with another 'magic' shirt- Nikkei Asian Review. TOKYO -- Japan's Toray Industries, together with fast fashion leader Fast Retailing, scored a huge hit with Uniqlo Heattech thermal underwear. 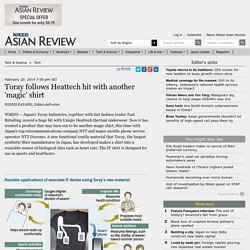 A smart shirt for sports and sleep tracking. This has been a great experience, we've made many friends and talked with awesome people! 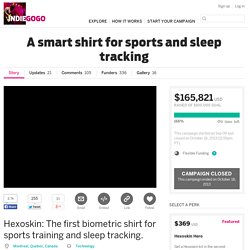 You can now order Hexoskin on our official website. Hexoskin is the first wearable movement, respiration, and heart activity tracker. Hexoskin tracks your health and gives you insights about your activities, your sleep, your life's choices. "The Hexoskin has the advantage of being a simple shirt and not something clunky like an armband" -- Crunchwear "Hexoskin is a sensor-filled smart shirt that offers significantly more health data than a basic fitness tracker like a Fitbit Flex. " -- Digital Trends. Under Armour, Inc. - Brand News. BIOREC. Competitor Analysis Template. The best companies in the world remain at the top of their game by keeping a close on eye on their competitors. 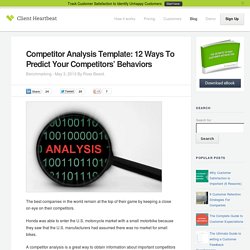 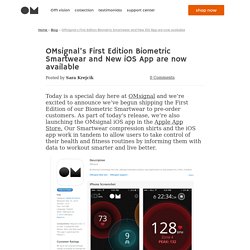 As part of today’s release, we’re also launching the OMsignal iOS app in the Apple App Store. Our Smartwear compression shirts and the iOS app work in tandem to allow users to take control of their health and fitness routines by informing them with data to workout smarter and live better. Enquadramento « eact – Empresa Activa. These high-tech gym clothes look inside your muscles to analyze your workout. When Dhananja Jayalath and Christopher Wiebe were students at the University of Waterloo, working towards degrees in electrical engineering, they were also gym buddies who liked to pump iron together. 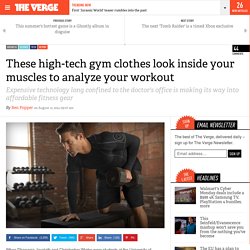 Building OMsignal, one thread at a time. OMsignal is not your every-day startup. Interview with Juliana Chua from Zensorium, speaker at WT I conference 2014 Asia. 1. You are coming from a corporate background before you founded your startup. How did you come up with the idea for founding Zensorium? The idea originated when my CEO was working in Japan to consumerize healthcare. However we decided to take on the fitness and wellness segment first, where there exist the opportunity to instill lifestyle changes. We saw the trend where 75 million US adults used their mobile devices to access health-related information in 2012, up from 61 million in 2011. Buy Tinké. Mais qualidade de vida na Plux - PME. Hugo Gamboa afirma que o curso fê-lo perceber onde pode gerar mais crescimento, mas confessa que ainda falta observar os resultados e descobrir se existem outras dificuldades.

Empresa PluxÁrea de actividade Soluções inovadoras para a área da saúde, desporto e investigaçãoInício de actividade 2007Número de colaboradores 20Facturação em 2010 500 mil euros. Materiais Inteligentes, funcionais e ecológicos integrados em estruturas têxteis. NewDetail. In a recent project named HARKEN, biomedical engineering company PLUX, the research center IBV, and several other partners both from academia and industry are leading us to believe that there may be better ways. The team contributed to the integration of respiration and heart rate sensors on the safety belt and seat of a car, in an approach that doesn’t require the user to wear anything directly applied on the body. From your sleep to your physical activity, dozens of new wearable quantified-self devices appear every month, so one might think that these are the next big thing right?

Ambiotex. Style meets engineering in smart fabric belly band. Using computerized knitting software, researchers have designed a belly band garment that incorporates special yarn and RFID technology to allow the monitoring of uterine contractions. Photo: Drexel University. Ohmatex announces partner for stretch sensors. Photos: Ohmatex Ohmatex has announced a partnership with Danfoss PolyPower® A/S to supply their stretch sensors to the textile industry. Stretch sensors have many applications; the smart textile industry is just one of the markets that can utilize the high-quality capacitive sensor.

The partnership supports the company’s efforts to share its expertise in integrating stretch sensors in wearable applications with the smart textile industry. Ohmatex will supply PolyPower stretch sensors to developers of textile-integrated wearables and help to incorporate stretch sensors into prototypes and commercial developments. Ohmatex is currently using the product in the development of a sensor platform for health and fitness applications, part of the FP7 MyWear project. Entidade: Biodevices, SA. Vital Jacket: a <i>t-shirt</i> que fala ao coração - Tecnologia - UALMedia.