Challenges Faced by Businesses to Hire iOS App Developers. The smartphone landscape is changing rapidly with the growing number of Android and iOS operating system users. 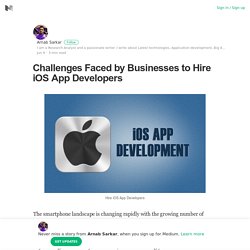 Looking at the statistics released in the month of July 2016 and taking it into consideration, Apple Inc. has sold over 1 billion iPhone devices since its inception in the year 2007 and it’s hard for anyone to ignore so many users. Top 10 IT Outsourcing Companies In India. Laravel Vs Yii: 8 Facts You Should Know Today -ValueCoders. Laravel Vs Yii: 8 Facts You Should Know Today If you have a knack of building web apps for your business in PHP, Laravel and Yii are familiar names to you. 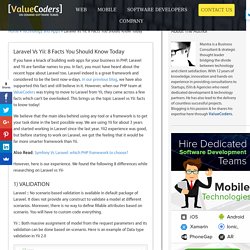 In fact, you must have heard about the recent hype about Laravel too. Laravel indeed is a great framework and considered to be the best now-a-days. In our previous blog, we have also supported this fact and still believe in it. However, when our PHP team at ValueCoders was trying to move to Laravel from Yii, they came across a few facts which can’t be overlooked. We believe that the main idea behind using any tool or a framework is to get your task done in the best possible way. 7 Reasons To Outsource Software Development Services in India. 7 Reasons: To Outsource Software Development Services In India. As an owner of your business, you already know the importance of being digitally and technically strong. 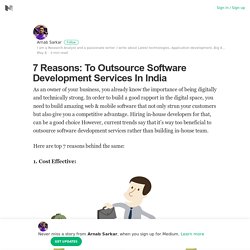 In order to build a good rapport in the digital space, you need to build amazing web & mobile software that not only strun your customers but also give you a competitive advantage. Hiring in-house developers for that, can be a good choice However, current trends say that it’s way too beneficial to outsource software development services rather than building in-house team. Here are top 7 reasons behind the same: 1. Cost Effective: 7 Skillsets To check Before You Hire Android Developers. 7 Skills To check Before You Hire Android Developers Your business needs a mobile application. with 88% of total Smartphone users, Android tops the chart as a Smartphone mobile operating system. 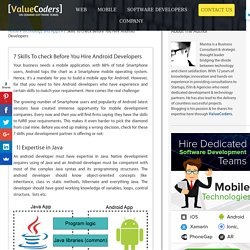 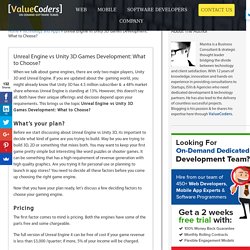 When we talk about game engines, there are only two major players, Unity 3D and Unreal Engine. If you are updated about the gaming world, you might already know that Unity 3D has 4.5 million subscriber & a 48% market share whereas Unreal Engine is standing at 13%. However, this doesn’t say all. Both have their unique offerings and decision depend upon your requirements. PHP or Node.js: Which Is More Secure? – Arnab Sarkar – Medium. From the beginning, PHP has always been there to take it to the next level. 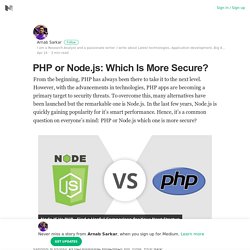 However, with the advancements in technologies, PHP apps are becoming a primary target to security threats. To overcome this, many alternatives have been launched but the remarkable one is Node.js. In the last few years, Node.js is quickly gaining popularity for it’s smart performance. Hence, it’s a common question on everyone’s mind: PHP or Node.js which one is more secure? Here are some of the key points that may differentiate the two and help you choose a better programming language for your web app -

Top 5 Xamarin Mobile App Development Companies – Arnab Sarkar – Medium. Mobile Application development has been growing at a breakneck pace, which is mostly due to the mass acceptance of mobile devices. 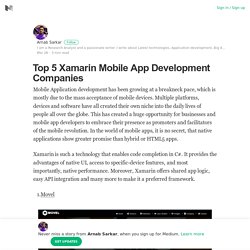 Multiple platforms, devices and software have all created their own niche into the daily lives of people all over the globe. This has created a huge opportunity for businesses and mobile app developers to embrace their presence as promoters and facilitators of the mobile revolution. In the world of mobile apps, it is no secret, that native applications show greater promise than hybrid or HTML5 apps.

Xamarin is such a technology that enables code completion in C#. It provides the advantages of native UI, access to specific-device features, and most importantly, native performance. Movel Movel is a Xamarin mobile app development company that focuses on delivering projects for businesses in Washington DC, Virginia, Maryland and other major parts of the USA. Why It Is Beneficial For Your Company To Outsource .NET Developers. There are number of platforms for the development of web apps and websites. 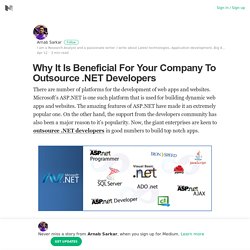 Microsoft’s ASP.NET is one such platform that is used for building dynamic web apps and websites. The amazing features of ASP.NET have made it an extremely popular one. On the other hand, the support from the developers community has also been a major reason to it’s popularity. Offshore MEAN Stack Programmers India. Angular 4 Is Out Now!! Should You Switch From Angular 2? Angular 4 Is Out Now!! 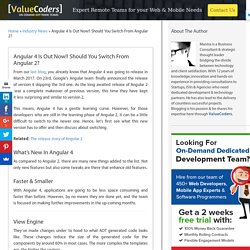 Should You Switch From Angular 2? From our last blog, you already know that Angular 4 was going to release in March 2017. On 23rd, Google’s Angular team finally announced the release of version 4 skipping the 3rd one. As the long awaited release of Angular 2 was a complete makeover of previous version, this time they have kept it less surprising and similar to version 2. This means, Angular 4 has a gentle learning curve. Related: The release story of Angular 2. Why laravel is the best php framework in 2017. Unity 3D Game Development Company India. Offshore React Native Programmers India. Swift Application Programmers India. Offshore Servoy Programmers India.

Native App vs Hybrid App Development: What To Pick? 2) Native app typically requires different codes for smartphone and tablets which makes it more difficult sometimes. 3) It costs pretty high to develop number of native apps for different platforms and maintain them separately. 4) If you need to release the app in another app store then you might need to complete re-write the codes. 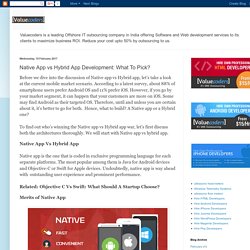 Hybrid App Hybrid app combines elements of both native app and Web apps. It takes most of the good features from native and adds cross browser flexibility from web apps. Merits of Hybrid App 1) The content of a hybrid app is easily portable and requires a native harness to run in another platform. 2) By using CSS, it makes the app design flexible and accommodates all kinds of device sizes. Native App vs Hybrid App Development: What To Pick? - Valuecoders. Before we dive into the discussion of Native app vs Hybrid app, let’s take a look at the current mobile market scenario. According to a latest survey, about 88% of smartphone users prefer Android OS and 11% prefer iOS. However, if you go by your market segment, it can happen that your customers are more on iOS.

Some may find Android as their targeted OS. Why Startups Prefer Swift Programming Language Over Objective C. In our last blog, we considered Swift Programming Language as one of the most popular mobile app development trends that’s going to conquer 2017. And that’s quite a fact! If you are a bit updated with the iOS world, you know that Swift has already taken over Objective C slowly and smoothly in December 2016. Swift Going Over Objective C In Dec’16. Mobile Application Development Services. Web Application Development Services. Client Reviews - Client Reviews. AngularJS, ReactJS &amp; Vue.js - What's coming up in 2017?

2016 has been a tremendous year for JavaScript. Host of new frameworks came to the picture. Some blurred, a few survived and a handful became shining stars. If you are little updated about these businesses, Angular and React are nothing new to you. Furthermore, if you are a bit flexible about coding, you must have tried Vue.js too. Hence, the JavaScript Frameworks for 2017 we chose, are these three. 11 Mobile App Development Trends in 2017. Hire Dedicated Prestashop Developers. Offshore VueJS Programmers India. Hire Dedicated OpenCart Developers. 12 Reasons Why Google AMP Will Increase Business Profit - Valuecoders. Mobile is getting more powerful everyday as 80 percent of individuals are searching the web using Smartphones. Surprisingly, 70 percent of them take action within one hour of completing their searches. This makes inevitable for businesses like you to be mobile ready at the first place.

However, a research shows the average load time for mobile sites is 19 seconds over 3G internet connections and 53% of mobile site visits are abandoned if pages take longer than 3 seconds to load. Now, that’s a major issue. Google AMP Google AMP fills this gap making the communication between businesses and customers smoother over mobile devices.

Hence, now you know the advantages of Google AMP and it’s implementations for your business. We, at ValueCoders know how to develop Google AMP friendly websites and mobile apps with AMP deep-linking. 356 total views. 11 Mobile App Development Trends To Stay In 2017 - Valuecoders. 9 Important Reasons for Hiring Dedicated Developers from ValueCoders. ValueCoders offer dedicated development teams to address continual business environment changes and needs. Being agile in our approach, we consult, evaluate, plan and execute according to process. We are clear about our strengths and focused on it. Our teams, dedicated to our clients, have developed some of the best software products. Symfony vs laravel Which php Framework To Choose. Offshore Mule Programmers In India.

5 essential skills required to manage remote team. Hiring a remote team of developers means, you bring resources on board for your development projects without allocating physical space in your office. The idea is cost saving as well as professional these days. A helpscout survey says “Approximately 69 percent of the employees surveyed cited higher productivity when working remote“ Offshore Reactjs Programmers India. AngularJS vs ReactJS. 7 Top JavaScript Frameworks List In Today's Time - Valuecoders. Sitefinity vs Drupal : Which is better for your business? Website And Mobile Application Development Company, Services In India. CodeIgniter Programmers India.