| Valley-Chevrolet in Spencer, IN, also serving Terre Haute, IN and Bloomington, IN is proud to be an automotive leader in our area. Since opening our doors, Valley-Chevrolet has kept a firm commitment to our customers. We offer a wide selection of vehicles and hope to make the car buying process as quick and hassle free as possible.

2018 Chevy Cruze Does Laps Around Ford Focus - Blogs - Community Chevy of Spencer Indiana. The Chevy Cruze and Ford Focus are major rivals in the compact car segment, with Ford and Chevy each vying to produce the best car for value-conscious commuters. 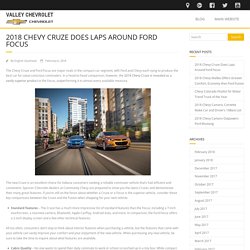 In a head-to-head comparison, however, the 2018 Chevy Cruze is revealed as a vastly superior product to the Focus, outperforming it in almost every available measure. The new Cruze is an excellent choice for Indiana consumers seeking a reliable commuter vehicle that’s fuel-efficient and convenient. Spencer Chevrolet dealers at Community Chevy are prepared to show you the latest Cruzes and demonstrate their many great features.

WHICH CHEVY IS YOUR CHEVY? 2018 IMPALA VS. 2018 MALIBU. Chevrolet makes so many great products that it’s often hard for consumers to choose which Chevy they want. 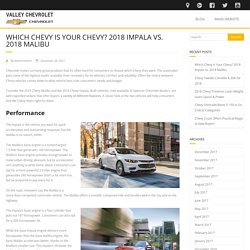 The automaker gets some of the highest marks available from reviewers for its vehicles’ comfort and reliability. Often the choice between Chevy vehicles comes down to what vehicle best suits consumers’ needs and budget. Consider the 2018 Chevy Malibu and the 2018 Chevy Impala. Both vehicles, now available at Spencer Chevrolet dealers, are well-regarded sedans that offer buyers a variety of different features. CHEVY SILVERADO BEATS F-150 IN SIX CRITICAL CATEGORIES. The Chevy Silverado and the Ford F-150 have a rivalry stretching back decades and, over the years, each truck has developed a passionate customer base. 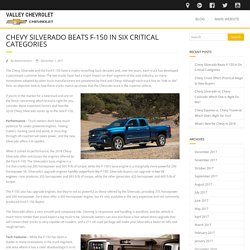 The two trucks have had a major impact on their segment of the auto industry, as many innovations adopted by other truck manufacturers are pioneered by Ford and Chevy. Although each truck has its “ride or die” fans, an objective look at how these trucks match up shows that the Chevrolet truck is the superior vehicle. Chevy Tops J.D. Power Tech Experience Study. The results of the 2017 J.D. 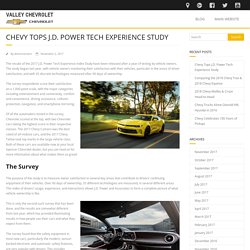 Power Tech Experience Index Study have been released after a year of testing by vehicle owners. The study began last year, with vehicle owners monitoring their satisfaction with their vehicles, particular in the areas of driver satisfaction, and with 35 discrete technologies measured after 90 days of ownership. CHANGES TO NEW CHEVROLET CARS FOR 2017: CAMARO, COLORADO, & CRUZE. Chevrolet offers a wide array of makes and models to fit everyone’s tastes and driving style. 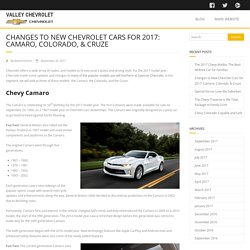 For the 2017 model year, Chevrolet made some updates and changes to many of the popular models you will find here at Spencer Chevrolet. Chevy Equinox Eclipses Toyota RAV4. Toyota’s RAV4 has long been a dominant force in the compact crossover SUV market, but the Chevy Equinox has stolen much of the RAV4’s thunder in recent years, outperforming it in terms of performance and driver and passenger comfort. 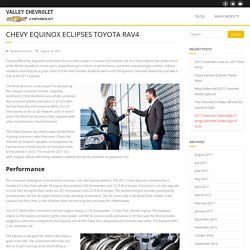 Indiana residents searching for a great small SUV for their families would do well to visit the Spencer Chevrolet dealership and take a look at the 2017 Equinox. Chevy Equinox Versus Toyota Rav4 - Community Chevy. Eight Reasons You’re Going to Love the 2017 Chevrolet Trax. The subcompact SUV market is heating up, as more drivers want a vehicle with the versatile cargo and passenger capacity of an SUV but want it in a less expensive and more fuel-efficient package. 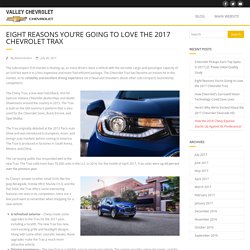 The Chevrolet Trax has become an instant hit in this market, as its reliability and excellent driving experience set it head and shoulders above other sub-compacts launched by competitors. How the 2018 Chevy Equinox Stacks Up Against Its Predecessor. When you are in the market for a new car, truck, or SUV, you want to make sure you buy the best of the best. 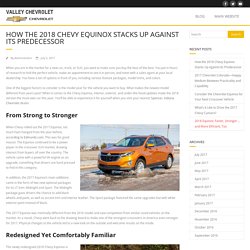 You put in hours of research to find the perfect vehicle, make an appointment to see it in person, and meet with a sales agent at your local dealership. You have a ton of options in front of you, including various feature packages, model trims, and colors. One of the biggest factors to consider is the model year for the vehicle you want to buy. What makes the newest model different from years past? 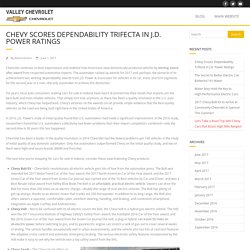 The automaker racked up awards for 2017 and, perhaps, the pinnacle of its achievement was winning dependability awards from J.D. Power & Associates for vehicles in its car, truck, and SUV segments for the second year in a row—the only automaker to achieve this distinction. For years, local auto consumers seeking cars for sale in Indiana have had it drummed into their heads that imports are the best-built and most reliable vehicles. That simply isn’t true anymore, as there has been a quality revolution in the U.S. auto industry, which Chevy has helped lead. Chevy’s victories on the awards circuit provide ample evidence that the best-quality vehicles on the road are being built right here in the United States of America. GM Challenges Eight Universities to Build Self-Driving Cars. General Motors recently enlisted the workforce of tomorrow to build the cars of tomorrow, issuing a challenge to eight universities to develop autonomous automobiles. 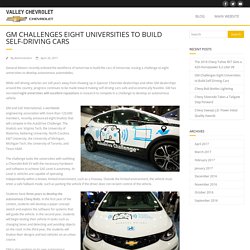 While self-driving vehicles are still years away from showing up in Spencer Chevrolet dealerships and other GM dealerships around the country, progress continues to be made toward making self-driving cars safe and economically feasible. GM has recruited eight universities with excellent reputations in research to compete in a challenge to develop an autonomous vehicle. GM and SAE International, a worldwide engineering association with more than 120,000 members, recently announced eight finalists that will compete in the AutoDrive Challenge.

Chevy Sweeps J.D. Power Initial Quality Awards. Modern consumers do a lot of research before making big purchases. We parse through specs and data on the internet, compare and contrast brand offerings, and weigh online reviews alongside anecdotal recommendations from friends and family before making our decision. This is a good thing; it keeps manufacturers on their toes, removing a lot of the guesswork and blind-buying from high dollar purchases and giving buyers a clearer picture of what to expect from a purchase. When it comes to buying a car, no one has done more to promote peace of mind and research quality satisfaction than J.D. Power and Associates. For thirty years, J.D. The IQS, which surveys new car and truck owners after ninety days of the purchase of a new vehicle, aims to determine which vehicles are good investments after the “new car honeymoon” period has worn off and problems have had time to present themselves.

Equinox – Highest Ranked Compact SUV Silverado LD – Highest Ranked Large Light-Duty Pickup. Chevy Colorado Trumps Nissan Frontier on Power, Comfort - Valley Chevy. In the competitive compact pickup truck market, there’s the Chevy Colorado—and then there’s the rest of the pack. The Colorado stands head and shoulders above other small trucks, including its close competitor, the Nissan Frontier. In a head-to-head matchup, the 2017 Chevy Colorado has clear advantages over the 2017 Nissan Frontier in a number of categories, including performance, towing capacity, interior space, amenities, and ride quality.

For consumers checking out cars for sale in Indiana in search of a family-friendly truck that offers a comfortable car-like ride but also the oomph required by a competent work truck, the Colorado is the right choice. The new 2017 Chevy Colorado model, now available at Spencer auto dealers, offers a variety of features consumers will love, including an updated V6 engine that offers greater power. When picking your next new truck, consider the differences between the new Colorado and the Nissan Frontier. Performance Features Interior Pricing History. What to Expect from the Bolt, Chevy’s Self-Driving Miracle Car.

Chevrolet will soon begin testing prototypes of its autonomous Chevrolet Bolt EV in Michigan, bringing the self-driving vehicle one step closer to Spencer Chevy dealers and Chevy dealers around the country. Chevrolet hopes to be the first major automaker to get an autonomous vehicle to market. The Detroit automaker has embarked on a rigorous testing program of autonomous Bolts. Chevrolet has been testing them in other parts of the country, including San Francisco and Scottsdale, Arizona. The testing in Michigan will help Chevrolet assess how well the vehicle performs in cold, snowy weather and develop any technology needed to allow a self-driving vehicle to compensate for obstacles posed by these conditions. GM to Pilot New Autonomous Chevy Bolt.

The Chevy Bolt EV goes nationwide this year, giving consumers at Spencer Chevrolet dealerships and Chevy dealers throughout the U.S. the opportunity to purchase this groundbreaking all-electric vehicle, the only electric vehicle under $50,000 currently capable of a range of over 200 miles. While General Motors has scored a major achievement in creating the first practical, affordable all-electric vehicle, the Detroit automaker isn’t resting on these laurels. GM is currently hard at work developing a self-driving version of the Bolt.

GM has begun testing prototype autonomous Chevy Bolts in Michigan, expanding testing programs that began in 2016 in California and Arizona. The new round of testing will place autonomous Chevy Bolts on public roads near GM’s Warren Tech Center campus and, later, in metro Detroit. GM is taking all reasonable safety precautions with the testing. The Michigan testing will determine how well GM’s autonomous driving technology fares in cold-weather conditions.