Why bendable electronics could be the future of the internet of things. When the first Harry Potter movie came out in 2001 the idea of the Daily Prophet, a newspaper that contains moving pictures, qualified as magic. 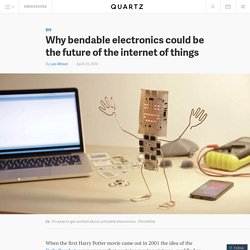 A Kickstarter campaign by Ynvisible, a Lisbon-based technology firm, is bringing that magic to life with its displays, held together with paper-thin circuitry. Milano. Ok, il prezzo è giusto da Carlo e Camilla in Segheria? Interactive Restaurant Technology with touch-enabled tables. Restaurants and cafes are among the fastest growing businesses in the food industry, with total expected revenue for 2014, in the US alone, being as high as $683.4 billion. 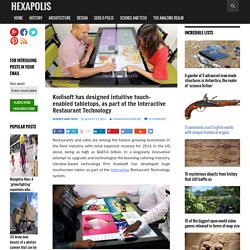 In a singularly innovative attempt to upgrade and technologize the booming catering industry, Ukraine-based technology firm Kodisoft has developed huge touchscreen tables as part of the Interactive Restaurant Technology system. Claiming to be the “future of the restaurant business”, IRT is actually a smart menu ordering system consisting of highly intuitive touch-enabled tabletop that functions as a menu screen as well as a waiter. The system starts serving the diners by allowing them to choose the language of the menu. BAO FERMENTED FOOD AND DRINK — Press. Tea Magazine Posted by Mike Schwartz on December 07, 2012 0 Comments You can read about kombucha in this article from Tea Magazine. 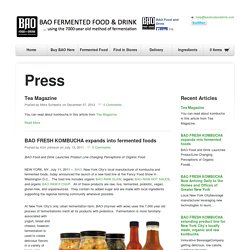 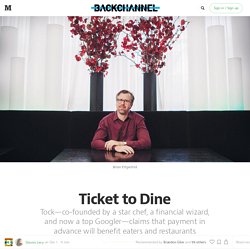 He worked out of the company’s Chicago office for over nine years, and gave up chances for promotion to keep working on products he loved, notably tools that allowed users to ditch Google and take their information with them. (“Fitz,” as he is widely known, dubbed the effort the “Data Liberation Front.”) While his business card read “engineering manager,” he referred to himself as a “data sommelier.” He thought his professional life was perfect. The Weirdest Fast-Food Mashups in America. The Waffle Taco. 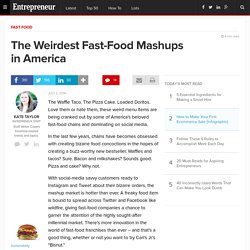 The Pizza Cake. Loaded Doritos. Love them or hate them, these weird menu items are being cranked out by some of America's beloved fast-food chains and dominating on social media. How Seaweed Became A Mainstream Snack In America. Seaweed Snacks. Reserve: New App Is Your Concierge to Hot Restaurants Across the US. The online reservation wars continue: Today, a new app called Reserve enters the space, bringing with it the promise of "digital concierge service" and access to tables at restaurants in New York City, Los Angeles, and Boston. 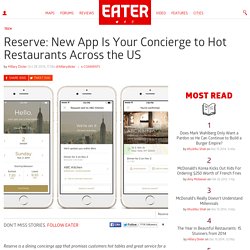 Reserve will roll out in San Francisco in the next few weeks, and the company is working towards adding DC, Chicago, and London to the list. The app has been in the works for several months, and has an impressive list of entrepreneurs behind it, including founders from Uber and Foursquare. When the customer arrives to the restaurant, they are promised to "be treated like a regular. " Here's how it works: Customers will select where to dine from Reserve's "curated list" of restaurant partners and give a time window of when they would like to do so. Reserve then secures the reservation at the restaurant, sending updates to the customer along the way. Reserve also is a mobile payment service. È pronto il caffè spaziale per l'astronauta italiana - Italia in Prima Pagina.

Photo Gallery: Hot restaurant menu trends for 2015. “I want what I want, when I want it” will be the theme of the food-and-beverage world in 2015, with customization-crazed Millennials — or the Demand Generation — driving most of the upcoming trends. 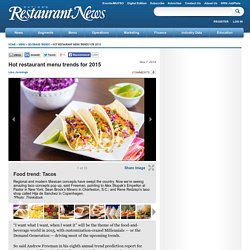 So said Andrew Freeman in his eighth annual trend prediction report for 2015, released Thursday by his firm Andrew Freeman & Co., based in San Francisco. This year’s theme: “The Pleasure Principle,” indicating that pleasure-seeking guests are looking for “instant gratification, education and participation” in their food-and-beverage experiences. Among restaurant industry trends in general, Freeman expects to see more “passion projects” from chefs who just want to do their own thing. Smaller cities, like Asheville, N.C.; Oakland, Calif; and San Antonio, Texas are where innovative concepts will be getting national attention. And culinary incubators will continue to pop up, bringing more food entrepreneurs into the industry. (24) Pin by Skillet Design & Marketing on Food Trends: 2015. 7 Food Trends To Watch In 2015. We can't really remember what life was like before bone broth (maybe one of the oldest food concepts on the planet) somehow took over the world in 2014. 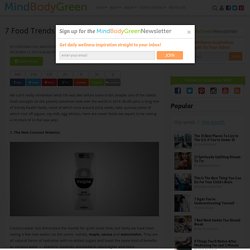 Broth joins a long line of trendy health foods, some of which stick around (chia seeds, kale, quinoa) some of which cool off (agave, soy milk, egg whites). Here are seven foods we expect to be seeing a lot more of in the new year. 1. The New Coconut Water(s) China and its coming Great Milk Battle. In China, the great milk battle is coming. 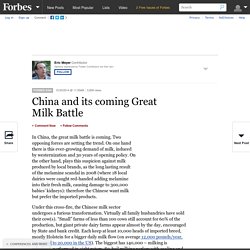 Two opposing forces are setting the trend. On one hand there is this ever-growing demand of milk, induced by westernization and 30 years of opening policy. On the other hand, plays this suspicion against milk produced by local brands, as the long lasting result of the melamine scandal in 2008 (where 18 local dairies were caught red-handed adding melamine into their fresh milk, causing damage to 300,000 babies’ kidneys): therefore the Chinese want milk but prefer the imported products. Under this cross-fire, the Chinese milk sector undergoes a furious transformation. Virtually all family husbandries have sold their cow(s). In 2012, China was producing 37.4 million tons of fresh milk and was the world’s third largest producer. 14.3% of the milk it consumes is imported: this percentage will grow to 34,5% next year. However the average Chinese only consumes 30 kilos of milk per year, compared to 70 to 80 kilos to his Korean or Japanese neighbors.

Looking At The Intersection of Amazon.com And Whole Foods Market. Food Processing InPerspective™ by Cargill Salt. Restaurant-inspired international flavors are now reaching all aspects of consumers’ cuisines: from television cooking shows, to foods trucks, to their children’s school lunches. 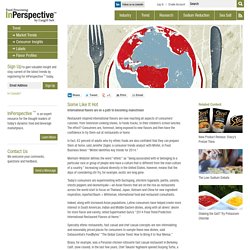 The effect? Consumers are, foremost, being exposed to new flavors and then have the confidence to try them out at restaurants or home. In fact, 62 percent of adults who try ethnic foods are also confident that they can prepare them at home, said Jennifer Zegler, a consumer trends analyst with Mintel, in Food Business News’ “Mintel identifies key trends for 2014.” (24) Pin by Susan D on 2015 Foodservice Trends. Photo Gallery: Hot restaurant menu trends for 2015. “I want what I want, when I want it” will be the theme of the food-and-beverage world in 2015, with customization-crazed Millennials — or the Demand Generation — driving most of the upcoming trends. So said Andrew Freeman in his eighth annual trend prediction report for 2015, released Thursday by his firm Andrew Freeman & Co., based in San Francisco. Neurogastronomy and facial recognition technology all the trend next year. A view of the new Starbucks Reserve Roastery and Tasting Room during its preview in conjunction with the company's biennial investor meeting in Seattle, Washington December 4, 2014. — Reuters picCHICAGO, Dec 6 — In 2015, the dining experience will continue along its high-tech trajectory, this time expanding beyond tablet menus into facial-recognition technology.

Neurogastronomy is set to change the way (as well as what, how, where and when) we eat while retailers and luxury brand names ranging from Ralph Lauren to Urban Outfitters entering the food service business. These are among some of the interesting divinings from restaurant consultancy group Baum + Whiteman in New York who every year look into their crystal ball to come up with a list of trends they predict will pervade the restaurant and dining industry. Topping their report is the role that technology will play in reshaping the dining experience. Here’s a selection of prophecies from their 2015 report: Photo Gallery: Hot restaurant menu trends for 2015. (24) Pin by Skillet Design & Marketing on Food Trends: 2015. The 10 Food Trends of 2015. After a year filled with baking bibles, food halls and powerfood it’s about time for a look into the food future.

What can we expect in 2015? What will be the food trends of next year? 1. Comeback of bread + local grainsAfter all the wheat belly paranoia and the rise of gluten allergies, bread now makes a comeback. But this time it’s bread from the best quality whole grains without any additives. (24) Pin by RMN Company on RMN News. Japanese comics food. Bao Publishing - Shop. Bao Publishing - Shop. Bao Publishing - Shop. The 10 Biggest Restaurant Trends for 2015. We may still be a few months away from the New Year, but for restaurant owners and others in the foodservice business, it's never too early to start thinking about how to cater to diners in 2015.

Food research firm Technomic has pinpointed 10 trends that its consultants and experts anticipate taking off in a big way next year. 2015 promises to continue some old trends, such as small plates, while bringing in some fresh concepts shaped not only by Generation Y, but also the teen digital natives of Generation Z. 1. Meals served with a side of bragging rights.

In 2015, customers can expect dinners out to increasingly become a "staged event that imparts bragging rights," according to Technomic. 7 Food Trends To Watch In 2015. Milano Beer Week : Milano Beer Week. Food trends on the rise, food trends that are dead. Lion's Head Ramen at Yusho. Photo: Martha Williams Everyone tries to predict what the new cupcake will be. Rather than rely on mere speculation, we turned to Google Trends, which measures the search interest in a topic, plots it on a graph and predicts when it'll reach its peak. 7 Fast-Food Restaurant Chains That Rake In $2M+ Per Store. China and its coming Great Milk Battle - Forbes. Looking At The Intersection of Amazon.com And Whole Foods Market. Five Trends Driving Traditional Retail Towards Extinction. Welcome to Forbes. Welcome to Forbes. SANDWICH SHOP — The Meat Hook. Koreatown, Los Angeles. Our Mission: Get Health, Give Health.