Comic Book Grading screenshots, images and pictures - Comic Vine. Comic Book Grading. Our grading standards are based on the standards laid out in the Overstreet Grading Guide with additional experience gained from our 40+ years in the comic industry. 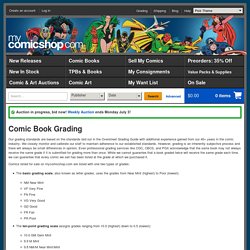 We closely monitor and calibrate our staff to maintain adherence to our established standards. However, grading is an inherently subjective process and there will always be small differences in opinion. Even professional grading services like CGC, CBCS, and PGX acknowledge that the same book may not always receive the same grade if it is submitted for grading more than once. While we cannot guarantee that a book graded twice will receive the same grade each time, we can guarantee that every comic we sell has been listed at the grade at which we purchased it. Comics listed for sale on mycomicshop.com are listed with one two types of grades: Overstreet comic book grading definitions & terms @ Collectibles Shop. So you want to know how to grade comic books? 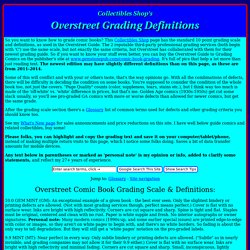 This Collectibles Shop page has the standard 10 point grading scale and definitions, as used in the Overstreet Guide. The 2 reputable third-party professional grading services (both begin with 'C') use the same scale, but not exactly the same criteria, but Overstreet has collaborated with them for their newest grading guide. So if you want to know your stuff even better, you can buy the Overstreet Guide to Grading Comics on the publisher's site at www.gemstonepub.com/comic-book-grading. It's full of pics that help a lot more than just reading text.

The newest edition may have slightly different definitions than on this page, as these are from 2011-2014. Comic Book Grading Scale & Definitions. Magic-Dan's raw (non-cgc-graded) comics are graded as a result of studying thousands of comics over a 30+ year period and practicing the ever-evolving Overstreet Comic Book Grading Guide. 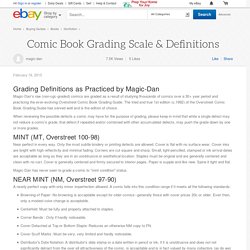 The tried and true 1st edition (c.1992) of the Overstreet Comic Book Grading Guide has served well and is the edition of choice. When reviewing the possible defects a comic may have for the purpose of grading, please keep in mind that while a single defect may not reduce a comic's grade, that defect if repeated and/or combined with other accumulated defects, may push the grade down by one or more grades. MINT (MT, Overstreet 100-98) Near perfect in every way. Cbcscomics. Comic Book Grading Guide. The CPG team has put together our grading standards based upon market standards in the hobby as well as included extensive research into CGC grading. 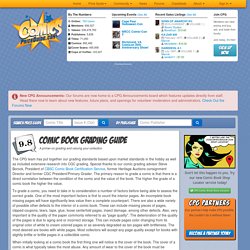 Special thanks to our comic grading advisor Steve Borock, President of CBSC Comic Book Certification Service, former Heritage Auctions consignment Director and former CGC President/Primary Grader. The primary reason to grade a comic is that there is a direct correlation between the condition of the comic and the value of the book. The higher the grade of a comic book the higher the value. To grade a comic, you need to take in to consideration a number of factors before being able to assess the correct grade. Comic Books: Buy, Sell, Trade, Consign, Collect. Comic Book Grading Guide.