V3Cars is for individuals who love cars and are passionate about them. We aim to be India's largest community for spreading 'love for automobiles'.

Magnite XE is aggressively priced, so much so that it has in it to compete against entry-level variants of B1-segment hatchbacks as well. 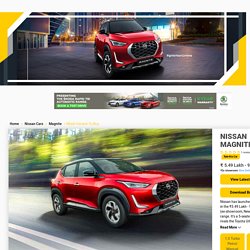 And it does include a host of must-have features too. So budget buyers who’re planning to buy a basic car can certainly plan to go for the Magnite XE. It will be a good idea to retrofit features like wheel covers, audio system and central locking in this variant. XV is a suitable upgrade from XE variant, however, we’d recommend you buy the higher variants with the turbo-petrol engine only, for a better ownership experience. There are three variants on offer with the turbo-petrol engine. With this powertrain, buyers can opt for the top-spec XV Premium variant as well if they find the features useful according to their usage. 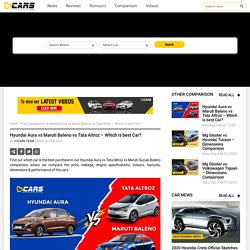 All of three cars are in a similar price range and cost between Rs. 5.29 lakh and Rs. 9.29 lakh in India. In the base model Hyundai Aura is expensive than Baleno and Altroz. The top model of Tata Altroz is most expensive in this car comparison at Rs. 9.29 lakh. Aura vs Baleno Vs Altroz Dimensions - Which Car is Bigger? The premium hatchback Tata Altroz is 3990 mm long, 1755 mm wide, 1523 mm tall and rides on a wheelbase measuring 2501 mm. A wider body normally results in better shoulder room inside the car while a higher roof makes it easier to get in and out of the car. Kia Seltos HTK vs Hyundai Creta E+ Comparison: Which Car To Buy?

Before getting into the specifications and features of both the cars, let’s take a look at the prices: The Seltos’ starting price is lower than the Hyundai’s. 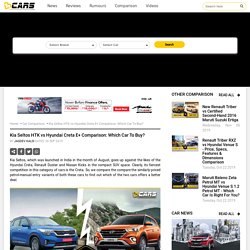 Both the Seltos and Creta have one variant priced really close to each other -- Seltos HTK and Creta E+, and we’ll compare these variants. Baleno vs Amaze – Specs, Dimensions & Features Comparison – V3Cars. This comparison might sound weird, but when I heard many of my friends considering the all new Honda Amaze instead of their original plans to buy the Maruti Suzuki Baleno, I thought that this is a very practical comparison indeed. 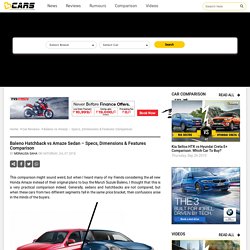 Generally, sedans and hatchbacks are not compared, but when these cars from two different segments fall in the same price bracket, then confusions arise in the minds of the buyers. So, here we try to find out which car you should buy as per your requirements – the all new 2018 Honda Amaze subcompact sedan or the highly successful Maruti Suzuki Baleno premium hatchback. Honda Amaze A subcompact sedan - The popular Amaze is a sub-4m compact sedan. This means an added boot for luggage. Maruti S-Presso vs Alto K10 vs WagonR vs Celerio Comparison: Mileage & Specs.

Let’s first compare the S-Presso’s dimensions against its siblings to find out just how big is it: Dimension Comparison - SPresso vs Celerio vs Alto K10 vs WagnoR Read Also - Maruti S-Presso Variants Explained: STD, LXI, VXI, VXI+ - Which Variant To Buy? 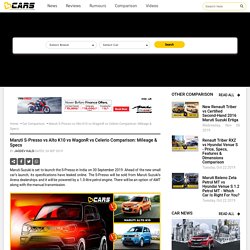 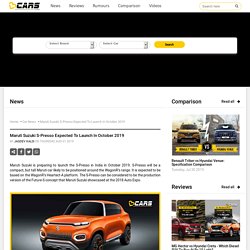 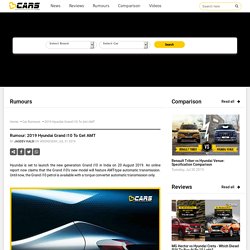 An online report now claims that the Grand i10’s new model will feature AMT-type automatic transmission. Until now, the Grand i10 petrol is available with a torque converter automatic transmission only. The only other Hyundai car in India that gets an AMT is the Santro, which was launched in 2018. BMW’s Upcoming New SUV Below X1 Could Be Called Urban X. BMW Developing Sub-X1 SUV -- Urban X BMW is reportedly developing a new entry-level crossover-SUV that might get the name Urban X (X pronounced as cross). 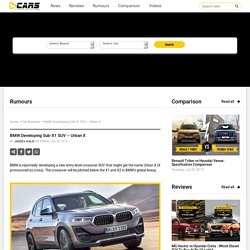 The crossover will be pitched below the X1 and X2 in BMW’s global lineup. While the name Urban X has not been finalised yet, it is speculated to have been running ahead of other names that are in contention. Renault Triber vs Hyundai Venue: Specification Comparison. The Renault Triber made its global debut in India in June 2019, and it is likely to launch in August. 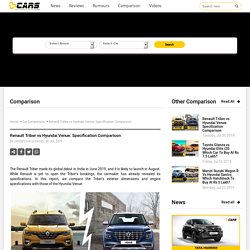 While Renault is yet to open the Triber’s bookings, the carmaker has already revealed its specifications. In this report, we compare the Triber’s exterior dimensions and engine specifications with those of the Hyundai Venue. While the Venue won’t be a direct rival to the Triber, it is expected that the base-spec Venue will be in the same price range as the top-spec Triber. Since the Triber is a sub-4m seven seater vehicle, it doesn’t have many direct rivals. Toyota Glanza vs Hyundai Elite i20 Comparison Of Petrol Cars. Both the Toyota Glanza and Elite i20 compete in the premium hatchback category, and their common rivals include cars like the Honda Jazz, Maruti Suzuki Baleno and Volkswagen Polo. 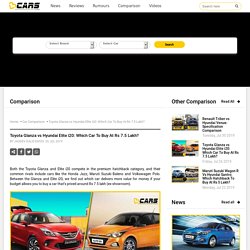 Between the Glanza and Elite i20, we find out which car delivers more value for money if your budget allows you to buy a car that’s priced around Rs 7.5 lakh (ex-showroom). Price Comparison Toyota Glanza’s G variant and Elite i20’s Sportz+ variant are the ones that we’ll compare. Both these are priced this side of the Rs 7.5 lakh mark and are separated by a difference of around Rs 10,000. While the Glanza is available only in two variants -- G and V, the Elite i20 with petrol-manual powertrain can be had in four -- Era, Magna+, Sportz+ and Asta(O). Tata Harrier With Black Exterior & Interior Might Come Soon. Tata Harrier With Black Exterior & Interior Might Come Soon Tata Motors has showcased the Harrier mid-size SUV at its 2019 annual general meeting in black exterior paint.

Tata does not offer the Harrier in black colour as of now. However, it looks like the manufacturer will soon start selling the mid-size SUV that rivals the likes of the MG Hector and Jeep Compass in black colour. Apart from the new exterior colour, the showcased Harrier also featured a black interior with a silver element on the dashboard. Tata Harrier With Black Exterior & Interior Might Come Soon. MG Hector SUV - Price, Features, Specs Details in India 2019. Toyota Innova vs Fortuner – Compare Price, Specs & Features. Toyota Fortuner vs Toyota Innova: Price, Specs & Features Comparison by Swati Sanchayi on Toyota Fortuner and Toyota Innova, both the SUVs by the Japanese automaker Toyota are one of the most loved SUVs in the Indian market.

Though both the Fortuner and Innova are premium SUVs manufactured by the same automaker Toyota, there are some differences in both the SUVs in terms of pricing and specifications. Tata Tigor EV Launched Starting at Rs. 9.99 Lakhs in India. Porsche Macan – Price Rs. 69.98 Lakhs Preparing to Launch in India. Home - Car News - New Porsche Macan Coming Soon; Prices To Start at Rs. 69.98 Lakhs by Monalisa Saha on Friday, Jun 28 2019 The famous Porsche Macan is preparing to launch soon in India in its new updated avatar. The updated Porsche Macan will launch in July with a host of fresh new cosmetic as well as feature updates. Just ahead of its launch, details about the refreshed Porsche SUV have been revealed on the web world. It has come to light that the premium SUV will come in two trim models – the Macan and the Macan S. The refreshed new Porsche Macan SUV range will flaunt a redesigned front fascia, revised bumpers, new 3D design elements on the headlights and Dynamic Light System Plus for adaptive lighting.

New 2020 Renault Captur Revealed; Will It Launch In India? By Jagdev Kalsi on Friday, Jul 05 2019 Pro Tip: It remains to be seen whether Renault will bring the new Captur or discontinue the nameplate altogether in India. Even if it comes to India, we don’t expect it to come by 2021. Renault has revealed the second generation Captur for European markets. The new Captur is based on the CMF-B platform and is ready for electrification. Mahindra eVerito, Tata Tigor EV To Get Cheaper; GST On Electric Cars To Be Lowered. Kia Seltos Variants & Features Leaked Ahead Of August Launch. By Jagdev Kalsi on Saturday, Jul 06 2019 Pro Tip: Petrol-powered Seltos will fall under the GT Line trim while diesel-powered Seltos will be grouped under HT Line variants. Maruti Suzuki offering Special Emergency Services for Mumbai Car Owners in Rainy Season. New BMW 3 Series India Launch on 21 August 2019.