UX Titan intends to improve the design of information. We deliver plenty of topics based on UX, UI, Usability, User Research and Product Reviews

Will Designers be replaced by AI & Robots? – UX Titan. The era of Robotics and Artificial Intelligence is approaching fast towards us. 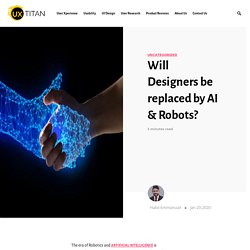 Every facet of our lives is being impacted by this new trend. According to some people, almost 2 million of manual human jobs are expected to be gone till 2030. With almost every industry and profession embracing AI because of all the perks it has to offer, UI/UX Design is not staying behind. AI is already being successfully implemented in the field of enhanced user experience. Examples like virtual assistances, voice recognizers, and chatbots are living proof of the high productivity of this technology. Nevertheless, after all this talk, an important question arises in the mind of designers. The answer is simple: “Not any time soon”. Yes, it can be agreed upon the fact that automating the design process would bring many benefits such as having guaranteed results each time, the easy adaption of successful design patterns, and the possibility of picking the best option to use among the many hundreds. 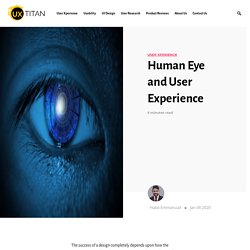 The easier it is for people to understand and process their working, the more willing they will be to use the product. Thus, it is important for the designers to have enough knowledge of how a human will engage with the interface, especially the pattern of how his eyes would pick up the visual information so they can design an efficient visual hierarchy, i.e. the order in which users interpret the data on a page. The more we design according the visual processing of the human being, the more we design for a great user experience. It’s all about using human abilities to help them understand the interface in better way. Four major factors can help a dashboard designer in designing a better user experience: First is Form, and has further properties like orientation, shape, size, line-width and line-height, and enclosure. 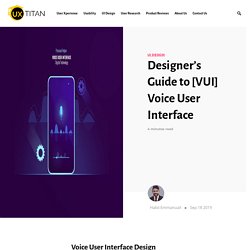 Instead of typing out things and tapping for commands we can just speak them out. In recent times, millennials and gen Z were known to have more interactions with their smart devices instead of communicating face to face. Now these interactions are verbal with robots of smart devices. In older science fiction, the future was one where humans became more robot like (bionic/ cyborg). This is where voice user interface (VUI) comes in. However, some experts at Alexa think that older technology will still carry on.

VUI- a Detailed Analysis Google, Amazon and Apple are best known for their voice user interface technology with smart home devices which are purely voice based. Essential Guide To A/B Testing. What is AB Testing AB testing, previously known as randomized controlled trials, is a way of testing that has been around for more than a 100 years. 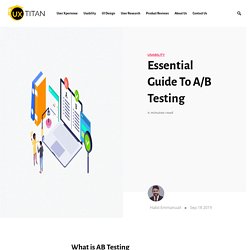 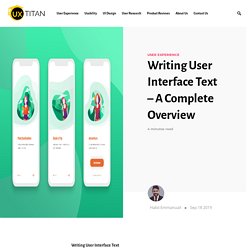 You might think that this terminology is something from the future. UX/ UI design is a term that was coined within this past decade, but the tech isn't new in any sense. If you look back to the first computers, the screens displayed user interface text without visuals. These were text blocks, menus, and clickable buttons. Clearing the Confusion Since these are relatively new terms, people are often confused about the job description.

The fact is that a UX writer, copywriter and content strategist do not have the same job. UX writing, content strategy and copywriting are completely different fields. How to use the best UI [User Interface] Design pattern ? All of us can agree on the fact that, in order to adapt to the demand of the present era, the modern world has shifted to a digitalized version of itself. 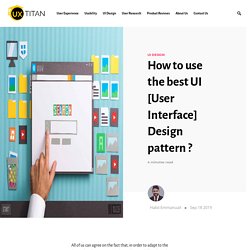 All types of business holders prefer to adopt online access and visibility by creating their own websites, through which they can easily grab attention of the audience towards their industry. This is why, it is mandatory to create an impressive user interface of the website which makes the audience stay on the webpage. This task can be effectively done by using a good and efficient UI Design Pattern. ui-patterns.com defines these patterns as: What are Benefits of Prototyping ? One of the most basic skill set for a designer is how to create prototypes for a product. 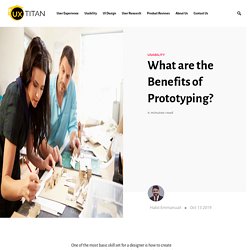 This includes drawing sketches with pen/ pencil and paper and creating visuals on digital devices. If you have a general sense of design, you can add a bit of knowledge about UI/ UX to create prototypes for websites and apps. It is becoming popular by the day for companies to prototype their websites and apps to save up on valuable time, money and resources.

Saving up on Resources Understanding the basic procedure of prototyping is self explanatory in how we save up on valuable time and money in product creation. It saves time and money fixing mistakes in the prototype stage. Essential Tips for Creating Better Dashboard Design – UX Titan.