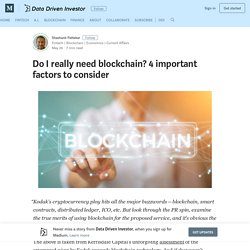 But look through the PR spin, examine the true merits of using blockchain for the proposed service, and it’s obvious the project is poorly thought out and will never work as promoted.” The above is taken from Kerrisdale Capital’s unforgiving assessment of the attempted pivot by Kodak towards blockchain technology. And if that wasn’t brutal enough, the hedge fund also described the move by the 138-year old photography company as being nothing more than “a last-ditch stock promotion gambit for a company hurtling towards bankruptcy.” Companies of all stripes continue to show keen interest in implementing blockchain. Juniper Research’s Blockchain Enterprise Survey found that nearly three-fifths of large corporations — those with over 20,000 employees — are either actively considering, or are in the process of, deploying blockchain technology. 1. 2. 3. 4.

(Source) How to Tell if You Should Use Blockchain in Your Application. This site may earn affiliate commissions from the links on this page. 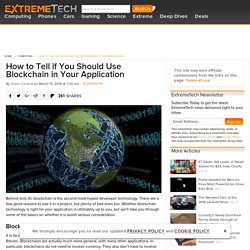 Terms of use. Behind only AI, blockchain is the second-most-hyped developer technology. Oracle BrandVoice: 5 Easy Ways To Determine If Your Company Needs Blockchain. By Lisa M. 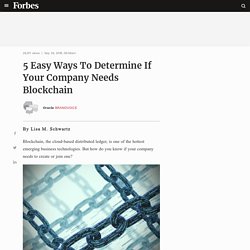 Schwartz Blockchain, the cloud-based distributed ledger, is one of the hottest emerging business technologies. But how do you know if your company needs to create or join one? To help you make that decision, you and your organization should ask (and answer) the following five basic questions: 1. Blockchains provide a shared, immutable, secure record of transactions across a business network, so embarking upon a blockchain project will require your commitment to a process that goes beyond your own organization or business—“going big,” so to speak. For example, a global shipping management company is going big with a blockchain to simplify the documentation process among ocean carriers, truckers, customs agencies, and logistics providers, projecting a 60% reduction in the time required to collect and confirm data from multiple parties. 2. 3. F﻿ind out more about Oracle Cloud applications Consider a notorious example from the aerospace industry. 4. 5.

The Blockchain Is A Solution In Search Of A Problem – Whistling In The Wind. It is hard to think of another term that is as hyped right now as “blockchain”. 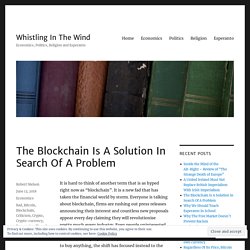 It is a new fad that has taken the financial world by storm. Everyone is talking about blockchain, firms are rushing out press releases announcing their interest and countless new proposals appear every day claiming they will revolutionise pretty much every industry. Even people uninterested in Bitcoin are taking a look at blockchain, in fact because so few people actually use the cryptocurrency to buy anything, the shift has focused instead to the technology aspect of Bitcoin.

The situation resembles the Emperor’s New Clothes, with no one wishing to admit they don’t see any use to blockchain for fear of seeming behind with the times or not tech savy. Do You Need a Blockchain? The Ultimate Blockchain Decision Tree. We keep hearing about blockchains and blockchain decision tree all the time. 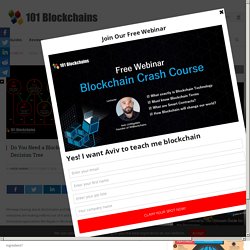 Entrepreneurs or Industries are making millions out of it and turning into a large scale business industry. Massive innovative approaches like Ripple or Binance showed a vast deal of success. It was not long ago that Ripple only started as a $10,000 investment startup, now look at it. It’s making its way to the billion-dollar capital in no time. What’s the secret behind it? There are so many similar projects like this that fuels the dreaming hearts of many Startups and Enterprises. Can this protocol Solve Blockchain's Privacy Issues? Is Blockchain overrated? Do you need a Blockchain? Probably less than Wüst and Gervais think you do. The general answer to “do you need a blockchain?” 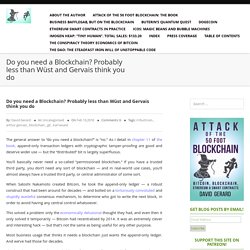 Is “no.” As I detail in chapter 11 of the book, append-only transaction ledgers with cryptographic tamper-proofing are good and deserve wider use — but the “distributed” bit is largely superfluous. You’ll basically never need a so-called “permissioned blockchain.” If you have a trusted third party, you don’t need any sort of blockchain — and in real-world use cases, you’ll almost always have a trusted third party, or central administrator of some sort. When Satoshi Nakamoto created Bitcoin, he took the append-only ledger — a robust construct that had been around for decades — and bolted on a torturously convoluted and stupidly wasteful consensus mechanism, to determine who got to write the next block, in order to avoid having any central control whatsoever.

This solved a problem only the economically delusional thought they had, and even then it only solved it temporarily — Bitcoin had recentralised by 2014. This paper is worth your time. Why Cryptocurrency Matters - The Cryptonomist. Why Cryptocurrency Matters: I’m including myself in this group, as a majority of those who ever bought a cryptocurrency but Bitcoin or Ethereum, do not really understand how and if a technology will actually get adopted. 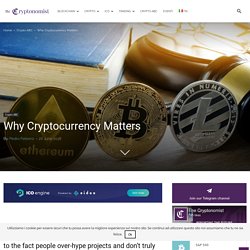 The purpose of cryptocurrency is one and only: to decentralize via economic incentives (rewards and punishments). A blockchain without economic incentives is just a really slow and expensive database. There are two main misconceptions, in my view, why a company should use blockchain technology. The first is that some really smart folk believe blockchain only makes sense in a few, very specific, situations as is the case of money; the second is that blockchain and bitcoin are not the same, meaning this technology can be used without a cryptocurrency.

Both opinions ignore a simple fact, which is the reason why this technology was created in the first place. When do you need blockchain? Decision models. (Original post from Aug. 2016. 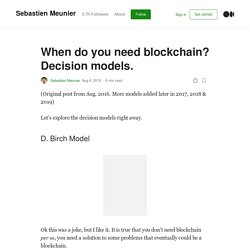