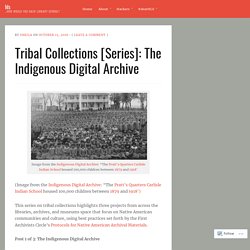 Catalog.archives. The Words That Are “Most Hip Hop” This essay covers fairly advanced statistical concepts (including machine learning!) 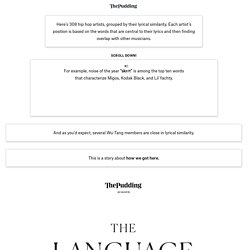 , which you probably didn’t expect going in. Which means we’re anticipating experts with machine learning and data science PhDs to email us with, “that was the most complete piece of bullshit ever. You didn't even consider....,“ proceeded by a 10-point response on how they would have done this differently. But if you’re not one of those cantankerous experts, you might be intrigued by this mathematical wizardy. Which means you get: CertificateofCompletion I unintentionally read about fancy math and stats Things I may now have an opinion on: The Golden Age of the Poster, 1880-1918. Fusion Tables. The Smithsonian Design Museum Digitizes 200,000 Objects, Giving You Access to 3,000 Years of Design Innovation & History. 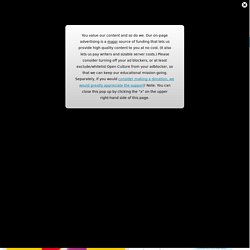 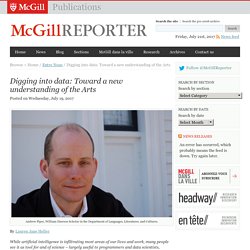 By Lauren Jane Heller While artificial intelligence is infiltrating most areas of our lives and work, many people see it as tool for and of science – largely useful to programmers and data scientists, certainly not for English majors. Datasets hold information from admissions books for Philadelphia's Eastern State Penetentiary. Archaeologists create public database of thousands of plague victims buried at Bedlam burial ground. Uncovering Latent Metadata in the FSA-OWI Photographic Archive. Abstract We present our use of the FSA-OWI Photographic Archive, a collection of over 170,000 photographs taken by the US Government between 1935 and 1945, within Photogrammar as a case study of how to integrate methodological research into a digital, public project. 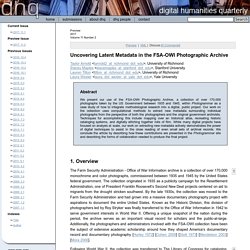 Our work on the collection uses computational methods to extract new metadata surrounding individual photographs from the perspective of both the photographers and the original government archivists. Techniques for accomplishing this include mapping over an historical atlas, recreating historic cataloging systems, and digitally stitching together rolls of film. Tableau Software. Earth. Ngram Viewer. 10.2 is Here with New Geo Spatial Capabilities. Digging through history using digital tools. With one foot solidly in the past and the other anchored in digital technology, Tobias Higbie is adept at keeping his balance in both worlds as a historian who is skilled in digitizing historical records and using them to gain new perspectives. 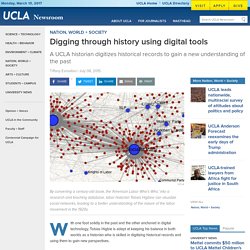 An associate professor in history who teaches classes on U.S. history, labor and social movement history, labor studies and digital humanities/history, Tobias is a firm believer in doing interdisciplinary research that allows for the integration of new methods, concepts and strategies when documenting the past. Tobias Higbee “We’re eclectic, and our toolbox can be varied,” Higbie said. “It is detrimental to get too caught up in one’s own discipline since good ideas are all around us.” A labor historian, Higbie has completed a project to convert a century-old book on U.S. labor into a research and teaching database with the aid of colleagues from the UCLA Library and Center for Digital Humanities. 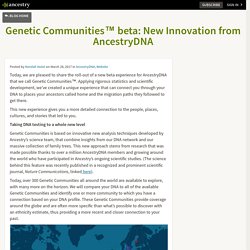 Applying rigorous statistics and scientific development, we’ve created a unique experience that can connect you through your DNA to places your ancestors called home and the migration paths they followed to get there. This new experience gives you a more detailed connection to the people, places, cultures, and stories that led to you. Taking DNA testing to a whole new level Genetic Communities is based on innovative new analysis techniques developed by Ancestry’s science team, that combine insights from our DNA network and our massive collection of family trees. The Library of Congress Makes 25 Million Records From Its Catalog Free to Download.

Image by Carol Highsmith, via Wikimedia Commons A quick fyi: According to Fortune, The Library of Congress announced that it “will make 25 million records from its catalog available for the public to download.” 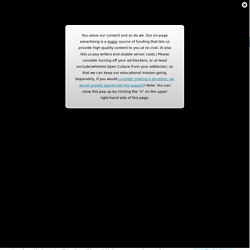 They add: Prior to this, the records—which include books and serials, music and manuscripts, and maps and visual materials spanning from 1968 to 2014—have only been accessible through a paid subscription. American Archive of Public Broadcasting Lets You Stream 7,000 Hours of Historic Public TV & Radio Programs. An archive worth knowing about: The Library of Congress and Boston's WGBH have joined forces to create The American Archive of Public Broadcasting and "preserve for posterity the most significant public television and radio programs of the past 60 years. 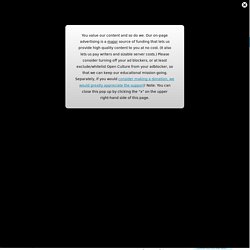 " Right now, they're overseeing the digitization of approximately 40,000 hours of programs. And already you can start streaming "more than 7,000 historic public radio and television programs. " The collection includes local news and public affairs programs, and "programs dealing with education, environmental issues, music, art, literature, dance, poetry, religion, and even filmmaking. " You can browse the complete collection here. Or search the archive here. Follow Open Culture on Facebook and Twitter and share intelligent media with your friends. If you'd like to support Open Culture and our mission, please consider making a donation to our site. Via Metafilter Related Content: NASA Releases a Massive Online Archive: 140,000 Photos, Videos & Audio Files Free to Search and Download. Last summer, astronomer Michael Summer wrote that, despite a relatively low profile, NASA and its international partners have been “living Carl Sagan’s dream for space exploration.” 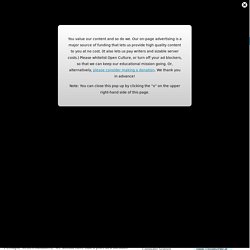 Summers’ catalogue of discoveries and groundbreaking experiments—such as Scott Kelly’s yearlong stay aboard the International Space Station—speaks for itself. But for those focused on more earthbound concerns, or those less emotionally moved by science, it may take a certain eloquence to communicate the value of space in words. “Perhaps,” writes Summers, “we should have had a poet as a member of every space mission to better capture the intense thrill of discovery.”

Sagan was the closest we’ve come. Though he never went into space himself, he worked closely on NASA missions since the 1950s and communicated better than anyone, in deeply poetic terms, the beauty and wonder of the cosmos. Uncovering Latent Metadata in the FSA-OWI Photographic Archive. NASA Its Software Online & Makes It Free to Download. A quick heads up: NASA has just announced that it has released its “2017-2018 software catalog, which offers an extensive portfolio of software products for a wide variety of technical applications, all free of charge to the public, without any royalty or copyright fees.” More than 30% of NASA innovations are software-based, and by making its software available to the public, it helps give a boost to entrepreneurs, small businesses, corporations and academics. Ah, the benefits of Technology Transfer. What’s in the PEN archives? The PEN records occupy 180 linear feet, span 1912 to 2008, and document the history and activities of the English PEN and PEN International, as well as the formation (and sometimes dissolution) of other PEN centers around the globe.

The records of PEN International and the founding center, English PEN, are closely interrelated; PEN International did not completely separate from its English predecessor until the late 1970s. The diversity of materials in the PEN records illuminates the range of activities in which the organization has engaged, from meetings and social gatherings to organized protests and campaigns to publications and literary awards.

Internet Archive: Digital Library of Free Books, Movies, Music & Wayback Machine. Enter a Huge Archive of Amazing Stories, the World's First Science Fiction Magazine, Launched in 1926. If you haven’t heard of Hugo Gernsback, you’ve surely heard of the Hugo Award. Next to the Nebula, it’s the most prestigious of science fiction prizes, bringing together in its ranks of winners such venerable authors as Ursula K. Le Guin, Arthur C. Clarke, Robert Heinlein, Neil Gaiman, Isaac Asimov, and just about every other sci-fi and fantasy luminary you could think of.

It is indeed fitting that such an honor should be named for Gernsback, the Luxembourgian-American inventor who, in April of 1926, began publishing “the first and longest-running English-language magazine dedicated to what was then not quite yet called ‘science fiction,’” notes University of Virginia’s Andrew Ferguson at The Pulp Magazines Project. Free to Use and Reuse: John Margolies Photographs of Roadside America. The Metropolitan Museum of Art Makes 140,000+ Artistic Images from Its Collections Available on Archive.org. As an Open Culture reader, you might already know the Internet Archive, often simply called "Archive.org," as an ever expanding trove of wonders, freely offering everything from political TV ads to vintage cookbooks to Grateful Dead concert recordings to the history of the internet itself.

You might also know the Metropolitan Museum of Art as not just a building on Fifth Avenue, but a leading digital cultural institution, one willing and able to make hundreds of art books available to download and hundreds of thousands of fine-art images usable and remixable under a Creative Commons license. Now, the Internet Archive and the Metropolitan Museum of Art have teamed up to bring you a collection of over 140,000 art images gathered by the latter and organized and hosted by the former.

A Spoonful of Sugar Helps the Radioactive Oatmeal Go Down. When Fred Boyce and dozens of other boys joined the Science Club at Fernald State School in 1949, it was more about the perks than the science. Club members scored tickets to Boston Red Sox games, trips off the school grounds, gifts like Mickey Mouse watches and lots of free breakfasts. But Fernald wasn’t an ordinary school, and the free breakfasts from the Science Club weren’t your average bowl of cereal: the boys were being fed Quaker oatmeal laced with radioactive tracers.

The Fernald State School, originally called The Massachusetts School for the Feeble-Minded, housed mentally disabled children along with those who had been abandoned by their parents. Conditions at the school were often brutal; staff deprived boys of meals, forced them to do manual labor and abused them. Boyce, who lived there after being abandoned by his family, was eager to join the Science Club. 24,000 Vintage Cartoons from the Library of Congress Illustrate the History of This Modern Art Form (1780-1977) 25,000+ 78RPM Records Now Professionally Digitized & Streaming Online: A Treasure Trove of Early 20th Century Music. 3D Scans of 7,500 Famous Sculptures, Statues & Artworks: Download & 3D Print Rodin's Thinker, Michelangelo's David & More.

Leonardo da Vinci's Visionary Notebooks Now Online: Browse 570 Digitized Pages. Quick, what do you know about Leonardo da Vinci? He painted the Mona Lisa! He wrote his notes backwards! He designed supercool bridges and flying machines! Download 200+ Belle Époque Art Posters: An Archive of Masterpieces from the “Golden Age of the Poster” (1880-1918) WordWanderer - Another Neat Word Cloud Tool. There certainly is not a shortage of word cloud creation tools on the web. The latest that I've tried is WordWanderer. WordWanderer attempts to be different from other word cloud creation tools by letting you drag and drop words to rearrange the look of your word clouds.

15 Massive Online Databases You Should Know About. The First 100 Days of Fascist Germany: A New Online Project from Emory University. From Emory University comes The First 100 Days of Fascist Germany, an attempt to document online what happened on each day–from January 30, 1933 through May 9, 1933–when Hitler was named Reichskanzler of Germany. As you can perhaps imagine, the motivation for the project isn’t entirely divorced from current events. Stream 8,000 Vintage Afropop Recordings Digitized & Made Available by The British Library. World War I: Wartime Sheet Music. Endangered Data and the Digital Index of North American Archaeology (DINAA) 20,000 Letters, Manuscripts & Artifacts From Sigmund Freud Get Digitized and Made Available Online. A Digital Archive of Slave Voyages Details the Largest Forced Migration in History. More Than 100 Sets of Primary Source Documents for Students - Best of 2016. Download Influential Avant-Garde Magazines from the Early 20th Century: Dadaism, Surrealism, Futurism & More.