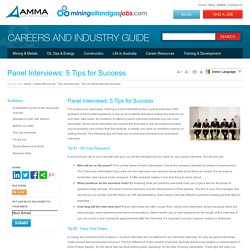 If the prospect of being interrogated by a line up of complete strangers makes you want to run and hide, take heart. An invitation to attend a panel interview indicates you are a top candidate. Since panel interviews are usually the final step in the recruitment process, you’re probably one of less than five finalists. In reality, you have an excellent chance of getting the job. The following tips will help you survive and succeed your next panel interview. A quick phone call to your recruiter will give you all the background you need for your panel interview. Who will be on the panel? In reality, the questions and answers in a panel interview are no different to an individual interview. Take a step back - Don’t allow yourself to indulge in fearful emotion.

Perhaps the most difficult aspect of panel interviews is paying sufficient attention to multiple people at the same time. OECD Recruiting Presentation. Paris21-manager-recruitment.pdf. Prepare and Succeed your panel interview. Prepareandsucceedyourpanelinterview. Dec%202010%20UN%20OECD%20US%20delegation.pdf. Prepareandsucceedyourpanelinterview. Over 500 free databases from the OECD. Data suggest they’re not Greek Scottish newspaper The Sunday Post (“A thoroughly decent read”) built its fortune on a mixture of gratitude for heart-warming behaviour; outrage at things that should or should not be happening in this day and age; cartoon strips featuring happy families; editorials that denounced absolute disgraces; and reader services that catered to two main groups. 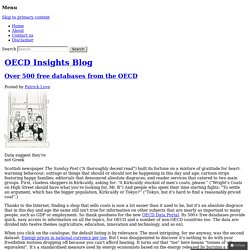 First, clueless shoppers in Kirkcaldy, asking for: “A Kirkcaldy stockist of men’s coats, please.” (“Wright’s Coats on High Street should have what you’re looking for, Mr. B”) And people who spent their time starting fights: “To settle an argument, which has the bigger population, Kirkcaldy or Tokyo?” (“Tokyo, but it’s hard to find a reasonably-priced coat”.) When you click on the catalogue, the default listing is by relevance. Take Greece for instance. The OECD Data Portal has a useful feature called “pinboard” that allows you to collect a number of different data sets and present them together. Useful links. International Transport Forum. 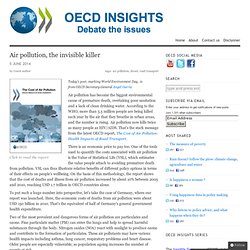 According to the WHO, more than 3.5 million people are being killed each year by the air that they breathe in urban areas, and the number is rising. Air pollution now kills twice as many people as HIV/AIDS. That’s the stark message from the latest OECD report, The Cost of Air Pollution: Health Impacts of Road Transport. There is an economic price to pay too. To put such a huge number into perspective, let’s take the case of Germany, where our report was launched. Two of the most prevalent and dangerous forms of air pollution are particulates and ozone. Road transport is responsible for roughly half the air pollution in OECD countries, and up to 90% of that is from diesels. What can be done? 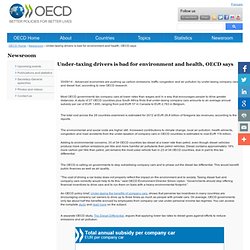 Most OECD governments tax company cars at lower rates than wages and in a way that encourages people to drive greater distances. A study of 27 OECD countries plus South Africa finds that under-taxing company cars amounts to an average annual subsidy per car of EUR 1,600, ranging from just EUR 57 in Canada to EUR 2,763 in Belgium. The total cost across the 28 countries examined is estimated for 2012 at EUR 26.8 billion of foregone tax revenues, according to the reports. The environmental and social costs are higher still. Increased contributions to climate change, local air pollution, health ailments, congestion and road accidents from the under-taxation of company cars in OECD countries is estimated to cost EUR 116 billion. Women in Business 2014.