These travel time maps show how well, or badly, British cities are connected by rail. There are two different ways of measuring distance. 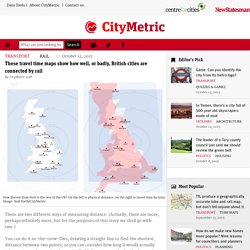 (Actually, there are more, perhaps infinitely more, but for the purposes of this story we shall go with two.) You can do it as-the-crow-flies, drawing a straight line to find the shortest distance between two points; or you can consider how long it would actually take you to get from point A to point B. Of these two methods, the former has the advantage of being objective, scientific and accurate; but it's the latter that actually chimes with human experience of the world. Which brings us to this rather clever map we found on the website of entrepreneur, occasional CityMetric contributor and professional Yorkshireman Tom Forth. The map shows how well connected 22 British cities are by rail. To make things even cooler, the travel time map overlays a warped, pink version of the British isles.

All that's probably a bit difficult to visualise, though, so let's actually try it out. Let's start with London. Distances from Birmingham. "The True Size" map lets you move countries around the globe, to show how big they really are. A consensus has rapidly emerged around the correct way to respond to Britain’s exit from the European Union: blind panic. 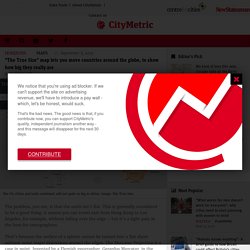 There’s a reason for this. It’s not that new arrangements will inevitably be a disaster (though it’s far from clear that they won’t be) – it’s simply that all bets are off. ​Using open tools to create the digital map of Cairo’s public transit. Follow the authors, Tatiana (@tatipq) and Diego (@canaless) on Twitter The first step in any transit planning process involves understanding the current supply and demand of transit services. 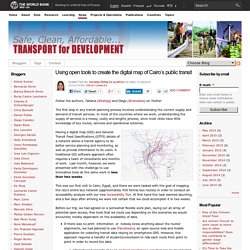 In most of the countries where we work, understanding the supply of services is a messy, costly and lengthy process, since most cities have little knowledge of bus routes, services and operational schemes. Having a digital map (GIS) and General Transit Feed Specifications (GTFS) details of a network allows a transit agency to do better service planning and monitoring, as well as provide information to its users. Tangram · Mapzen. Tangram is a map renderer designed to grant you ludicrous levels of control over your map design. 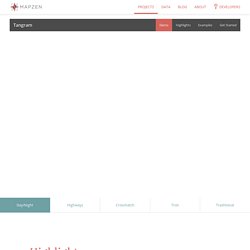 By drawing vector tiles live in a web browser, it allows real-time map design, display, and interactivity. Using WebGL, Tangram saddles and rides your graphics card into a new world of cartographic exploration. Animated shaders, 3D buildings, and dynamic filtering can be combined to produce effects normally seen only in science fiction. Map styles, data filters, labels, and even graphics card code can be defined in a human-readable and -writable plaintext scene file, and a JavaScript API permits direct interactive control of the style.

Day/Night Real-time design Because Tangram draws maps live in your browser, you can update styling properties in real-time, instantly. In this example, an isometric camera’s perspective is varied along with the color and direction of a light, resulting in a time-lapse drone’s-eye view. Check out the full demo – then check out the styling code! Urban Observatory App. How Big Is Your City, Really? When our sense of a place distorts its actual size. 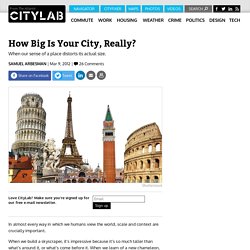 In almost every way in which we humans view the world, scale and context are crucially important. When we build a skyscraper, it’s impressive because it’s so much taller than what’s around it, or what’s come before it. When we learn of a new chameleon, it’s wonderful because it’s so much smaller than anything else we’ve ever seen before. But every now and then, we stumble across a fact that changes our sense of context, connecting two parts of the world with an understanding of scale that we normally lack. It turns out, for example, that the first moonwalk by the Apollo 11 crew only traversed a region no larger than a soccer field or baseball diamond.

It also turns out that a neutron star, a super-dense feature of the cosmos, can fit comfortably within the Boston metropolitan area. This was made clear to me when I moved to Kansas City, Missouri, last year. Here’s Kansas City in France: Top image: Maugli / Shutterstock.com. Global Forest Change. The Age of Megacities. 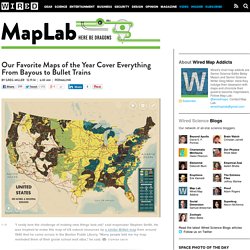 He was inspired to make this map of US natural resources by a similar British map from around 1940 that he came across in the Boston Public Library. "Many people told me my map reminded them of their grade school wall atlas," he said. Stephen Smith Stamen Design produced this map---and more than 300 others like it---for the National Audubon society's report on climate change. For a given bird (the tree swallow is depicted here), the map shows how scientists predict its winter (blue) and summer (yellow) ranges to shift by 2080. National Audubon Society / Stamen Design This hand-drawn map depicts a modern technology (the high-speed railway between Beijing and Shanghai) with an older aesthetic. Dong Zheng / Atlas of Design Louisiana is sinking fast. Matter on Medium Chris Whong. 35 mapas que os han hecho (u os harán) amar los mapas. 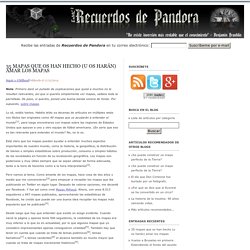 De paso, si queréis, poned una buena banda sonora de fondo. 20 maps that never happened. Maps are a powerful way of illustrating not only the world that is, but worlds that never have been. 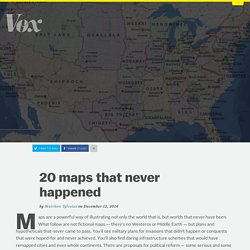 What follow are not fictional maps — there's no Westeros or Middle Earth — but plans and hypotheticals that never came to pass. You'll see military plans for invasions that didn't happen or conquests that were hoped-for and never achieved. You'll also find daring infrastructure schemes that would have remapped cities and even whole continents. Map Shows The World's Internet Population.