Michael Stipe: The Man Who Sold the World. DAVID BOWIE - Ashes To Ashes (2000) Michael Stipe from R.E.M. Singing Ashes To Ashes at The David Bowie Tribute Concert. The Dreaded Talk About Our Sexual Needs (Minus the Dread) Note: Rob Moore has contributed articles to the Planet Waves annual editions this year and last year. 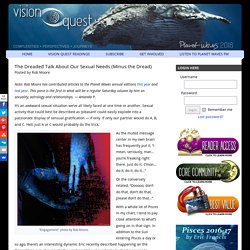 This piece is the first in what will be a regular Saturday column by him on sexuality, astrology and relationships. — Amanda P. It’s an awkward sexual situation we’ve all likely faced at one time or another. Sexual activity that could best be described as ‘pleasant’ could easily explode into a passionate display of sensual gratification — if only. If only our partner would do A, B, and C. Hell, just A or C would probably do the trick. “Engagement”; photo by Rob Moore. As the muted message center in my own brain has frequently put it, “I mean, seriously, man… you’re freaking right there. Or the conversely related, “Oooooo, don’t do that, don’t do that, please don’t do that…” With a whole lot of Pisces in my chart, I tend to pay close attention to what’s going on in that sign.

But this is where the dread often comes in. Let me assure you I am no stranger to this situation. Gary Oldman shares David Bowie’s final words: “[Music] has been my doorway of perception and the house that I live in” David Bowie was posthumously honored at this year’s Brit Awards. 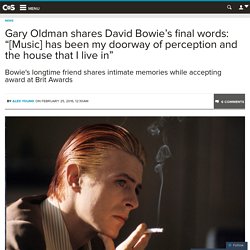 His longtime friend Gary Oldman accepted on Bowie’s behalf, and he shared several intimate recollections from the musician’s final months of life, including Bowie’s own words on his relationship with music. “In recent years David sparingly spoke about music and his process; but in one of these rare instances, he graciously and elegantly expounded,” Oldman said before recounting Bowie’s own words. ”Music has given me over 40 years of extraordinary experiences. I can’t say that life’s pains or more tragic episodes have been diminished because of it, but it has allowed me so many moments of companionship when I have been lonely and sublime means of communications when I have wanted to touch people. 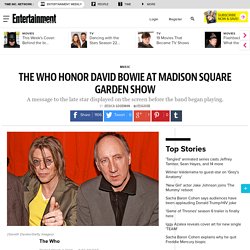 Before the band took the stage, a message scrawled across MSG’s screens and spoke of the late artist’s connection to New York and to The Who. Related The note read: “David Bowie. David Bowie Serenades SundanceTV's 'The Last Panth. By Kristen Santer | Indiewire March 4, 2016 at 11:09AM Bowie's "Blackstar" also serves as the main title for the series. 00000153-424b-dabd-a957-d37bef210000 SundanceTV released a 60-second trailer and key art for the new series "The Last Panthers. 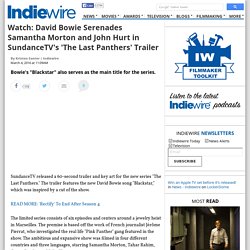 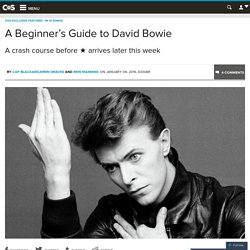 Ever felt overwhelmed by an artist’s extensive back catalog? Been meaning to check out a band, but you just don’t know where to begin? In 10 Songs is here to help, offering a crash course and entry point into the daunting discographies of iconic artists of all genres. This is your first step toward fandom. Take it.David Bowie is transformation incarnate.

All that in mind, it should be no surprise that whittling down the Bowie discography to 10 songs is nigh impossible. His 28th album, ★, arrives on the 8th – and with it a new era of genre fusion and experimentation. The Man Who Sold The World - David Bowie - Live at the beeb. David Bowie, the Tao Jones Index… – Uncut. ... and how revolutions were made without fear of looking foolish For a while in the mid-1990s, the West Midlands were home to a music festival called Phoenix; a slightly half-cocked Glastonbury surrogate that, far from taking place in idyllic Avalon, was established on a disused airfield-cum-landfill site blessed with little in the way of either shelter or shade. 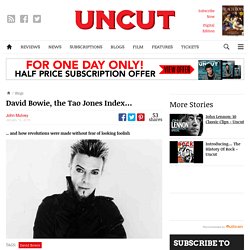 Bob Dylan, possibly disoriented, would fill in a gap in the schedule between Suede and Tricky. Crazy Horse would face off against The Wedding Present. Hotels in nearby Stratford-Upon-Avon seemed perpetually haunted by the forlorn figure of Keith from The Prodigy, found wandering their corridors in the later early hours.

It was all, I guess, very much of its time. In that spirit, one year in the middle of the decade, the festival witnessed a clandestine special show. This, I realise, is not how most people would likely remember David Bowie. The Occult Universe of David Bowie and the Meaning of "Blackstar" - The Vigilant Citizen - Understand the Occult Symbolism in Pop Culture. In the wake of David Bowie’s death, his last album, “Blackstar”, is his swan song, an enigmatic conclusion to a career punctuated by otherworldly alter-egos and esoteric symbolism. 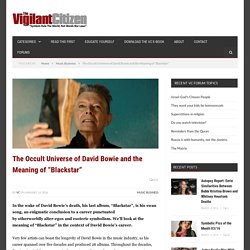 We’ll look at the meaning of “Blackstar” in the context of David Bowie’s career. Very few artists can boast the longevity of David Bowie in the music industry, as his career spanned over five decades and produced 28 albums. Throughout the decades, Bowie migrated from one musical genre to another, and even from one persona to another, but a constant remained: He was surrounded by an otherworldly aura. Through his work, Bowie turned himself into a musical ‘ascended master’, a Gnostic Christ-like figure who achieved a high level of illumination and who sought to communicate a cryptic message to humanity. People Share The Incredibly Moving Video David Bowie Released Days Before His Death. “Look up here, man, I’m in heaven. 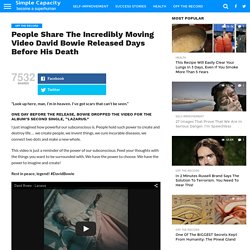 I’ve got scars that can’t be seen.” One day before the release, Bowie dropped the video for the album’s second single, “Lazarus.” I just imagined how powerful our subconscious is. People hold such power to create and destroy life… we create people, we invent things, we cure incurable diseases, we connect two dots and make a new whole. This video is just a reminder of the power of our subconscious.

Rest in peace, legend! David Bowie - Unwashed and Somewhat Slightly Dazed. David Bowie's Close Collaborators and Friends Reveal Funny, Poignant Stories About the Rock Icon: 'We Have Lost One of Our Princes' Since David Bowie passed away Jan. 10, tributes, testimonials, and first-hand accounts of his greatness have poured in about the music icon. 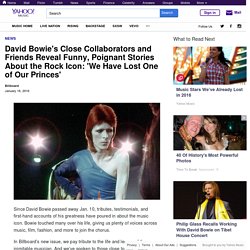 Bowie touched many over his life, giving us plenty of voices across music, film, fashion, and more to join the chorus. In Billboard’s new issue, we pay tribute to the life and legacy of the inimitable musician. And we’ve spoken to those close to him – early collaborators, friends from his wild ‘70s life, musicians who worked with him for decades – about the impact he had on them both personally and professionally. It’s a glimpse into the world of an unflinchingly independent artist, a good friend and a sensitive soul who overcame his own struggles.

Read on for poignant recollections from those who knew him well at different phases of his storied life. David Bowie: legendary rock star dies of cancer aged 69 – updates – as they happened. I’m devastated. 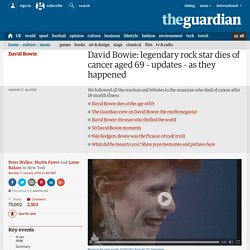 David Bowie changed the course of my life forever. I never felt like I fit in growing up in Michigan. Like an oddball or a freak. I went to see him in concert at Cobo Arena in Detroit. It was the first concert I’d ever been too. We got caught after and I was grounded for the summer. I already had many of his records and was so inspired by the way he played with gender confusion. Was both masculine and feminine. Funny and serious. Clever and wise.