Slender Man. Note: this article is about the main being focused on in the mythos. 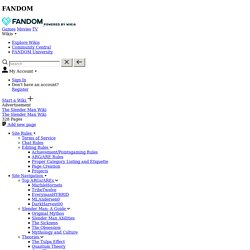 For the unrelated being based on him from MarbleHornets, see The Operator The Slender Man (also known as Slenderman) is a supernatural creature with nebulously defined characteristics and abilities. Slender Man was first mentioned in Something Awful Forum's "Create Paranormal Images". He generally appears (in modern times) as a tall humanoid creature in a black or grey suit, red or black tie, and white shirt. His face is totally white, completely devoid of facial features. The internet popularity of Slender Man has spawned a massive number of interconnected ARGs, collectively known as the Slender Man Mythos. Basic Description In almost every description of the Slender Man, his attributes will vary, sometimes greatly.

Eyeless Jack. Hello, my name is Mitch. I'm here to tell you guys about an experience I had. I don't know if it was paranormal or whatever stupid words people use to describe supernatural phenomena, but after that thing visited me, I believe in that paranormal trash, now. A week after I moved in with my brother, Edwin, after my house was foreclosed, I finished unpacking.

Edwin liked the idea of me moving in, since we had not seen each other after 10 years, so I was excited, too. I soon fell asleep after I moved in. The next night, however, I thought I heard my window opening and a loud thump, as if something entered my room. After I was rushed to the hospital, my doctor told me that I must have been sleepwalking, but then he showed me something that made my blood turn cold. The next night was my breaking point. I fell unconscious and woke up in the hospital. Laughing Jack. Its Christmas Eve in snowy 1800’s London England, and in a small house at the edge of town there lived a lonely 7-year-old boy named Isaac. 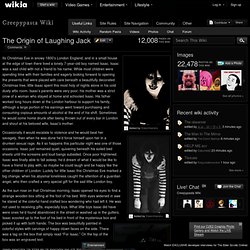 Isaac was a sad child with not a friend to his name. While most children were spending time with their families and eagerly looking forward to opening the presents that were placed with care beneath a beautifully decorated Christmas tree, little Isaac spent this most holy of nights alone in his cold dusty attic room. Isaac’s parents were very poor, his mother was a strict crow of a woman who stayed at home and schooled Isaac. His father worked long hours down at the London harbour to support his family, although a large portion of his earnings went toward purchasing and consuming copious amounts of alcohol at the end of his shift. Sometimes he would come home drunk after being thrown out of every bar in London and shout at his beloved wife, Isaac’s mother.

Suddenly Isaac heard a loud rattling noise coming from the bed behind him. BEN Drowned. BEN Drowned, or Haunted Majora's Mask, is a well-known creepypasta (and later, an alternate reality game) created by Alex Hall, also known as "Jadusable". 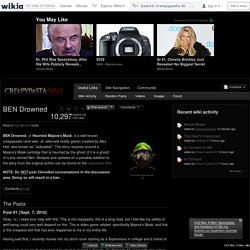 The story revolves around a Majora's Mask cartridge that is haunted by the ghost (if it is a ghost) of a boy named Ben. Analysis and updates on a possible addition to the story from the original author can be found on the Jadusable Wiki. NOTE: Do NOT post Cleverbot conversations in the discussion area. Doing so will result in a ban. The Pasta Post #1 (Sept. 7, 2010)

Jeff the Killer. Excerpt from a local Newspaper: After weeks of unexplained murders, the ominous unknown killer is still on the rise. After little evidence has been found, a young boy states that he survived one of the killer's attacks and bravely tells his story. "I had a bad dream and I woke up in the middle of the night," says the boy, "I saw that for some reason the window was open, even though I remember it being closed before I went to bed. I got up and shut it once more. Afterwards, I simply crawled under my covers and tried to get back to sleep. Jane The Killer. Listen, the only reason I'm going out of my way to tell any of you this is because the story "Jane the Killer" is starting to piss me off. 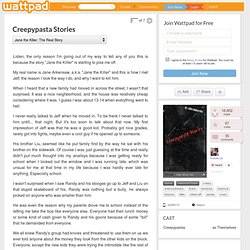 My real name is Jane Arkensaw, a.k.a. "Jane the Killer" and this is how I met Jeff, the reason I look the way I do, and why I want to kill him. Nina The Kiler. A/N - This was in Spanish so I used google translate .-. 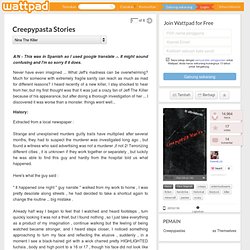 It might sound confusing and I'm so sorry if it does. Never have even imagined ... What Jeff's madness can be overwhelming? Much for someone with extremely fragile sanity can reach as much as mad for different reasons? Homicidal liu. A/N - This was in Spanish at first but with my mom's help Translating this. 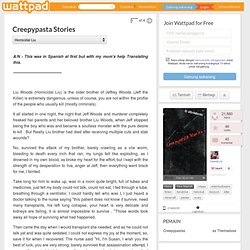 Liu Woods (Homicidal Liu) is the older brother of Jeffrey Woods (Jeff the Killer) is extremely dangerous, unless of course, you are not within the profile of the people who usually kill (mostly criminals). It all started in one night, the night that Jeff Woods and murderer completely freaked her parents and her beloved brother Liu Woods, when Jeff stopped being the boy who was and became a soulless monster with the pure desire to kill . But Really Liu brother had died after receiving multiple cuts and stab wounds?

Smile Dog. Smile Dog's story consists of a classic horror set-up – an amateur writer visits the house of a lady who supposedly has a story for which he can borrow from. 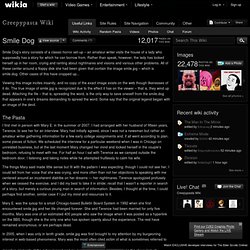 Rather than speak, however, the lady has locked herself up in her room, crying and ranting about nightmares and visions and various other problems. All of these center around a floppy disk she had been given that contain the image smile.jpg – which is smile.dog.