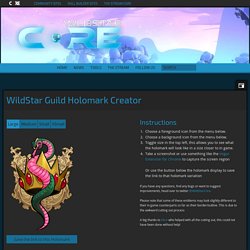 Choose a background icon from the menu below. Toggle size in the top left, this allows you to see what the holomark will look like in a size closer to in game. Take a screenshot or use something like the Imgur Extension for Chrome to capture the screen regionOr use the button below the holomark display to save the link to that holomark variation If you have any questions, find any bugs or want to suggest improvements, head over to twitter @WildStarCore. Please note that some of these emblems may look slightly different to their in game counterparts so far as their border/outline. A big thanks to Alice who helped with all the cutting out, this could not have been done without help! Foreground Background.

Downloading the ptr. PSA: If you have the PTR downloaded but not the LIVE version downloaded yet.... : WildStar. Zone Lore Archives. Wildstar/ Zone Lore Dulfy 0 Comments Wildstar Blighthaven Exile Zone Lore guide with locations of all the datacubes, journals, and tales key. 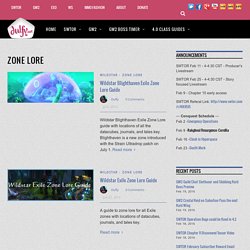 WildStar Tradeskills Guide - Wildstar Life. Thinking about WildStar Crafting professions as collecting materials and clicking a button, will lead you the wrong way. 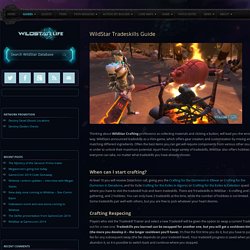 WildStars announced tradeskills as a mini-game, which offers gear creation and customization by mixing and matching different ingredients. Often the best items you can get will require components from various other sources in order to unlock their maximum potential. Apart from a large variety of tradeskills, WildStar also offers hobbies that everyone can take, no matter what tradeskills you have already chosen. When can I start crafting? WildStar Tradeskills and Crafting Guide. Overview The purpose of this guide is to provide you with a walkthrough of what WildStars crafting entails. 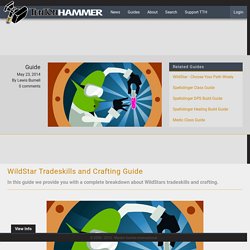 Make no mistake, crafting in WildStar has depth and can be intimidating at first and I’m certainly aware of how confusing I found it all when I first started. In total there are 9 tradeskills available in WildStar with players able to learn 2 at any one time. Fortunately it is possible to swap your tradeskills should you dislike whichever one you’ve picked : WeaponsmithArmorerMiningOutfitterSurvivalistTechnologistArchitectRelic HunterTailor In addition to these, there are also hobbies that you can undertake. CookingFarmingFishing (post-launch) Getting Started. Object moved. Cursed with a degenerative disease after delving into the forbidden secrets of alchemy, the Mordesh have come to Nexus to find a cure. 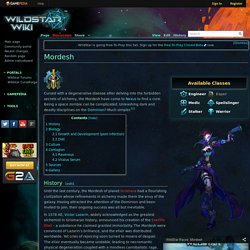 Being a space zombie can be complicated. Unleashing dark and deadly disciplines on the Dominion? Much simpler.[1] History[edit] Until the last century, the Mordesh of planet Grismara had a flourishing civilization whose refinements in alchemy made them the envy of the galaxy. Engineer - Official WildStar Online Community. WildStar Naming Guide – Part Two: From Artemis to Zax (and Everything in Between!) In the first part of our WildStar Naming Guide, we gave you a comprehensive collection of guidelines for naming your Exile characters in preparation for our upcoming Megaservers! 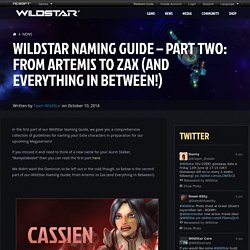 Chua names tend to be nonsensical and playful in sound. Yep, picking a second name - or a whole new one - couldn't be easier. WildStar Naming Guide – Part One: From Artemis to Zax (and Everything in Between!) Megaservers are coming! 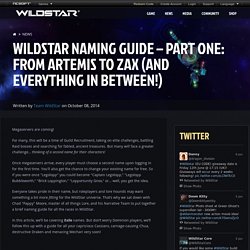 For many, this will be a time of Guild Recruitment, taking on elite challenges, battling Raid bosses and searching for fabled, ancient treasures. But many will face a greater challenge… thinking of a second name for their characters! Once megaservers arrive, every player must choose a second name upon logging in for the first time. You'll also get the chance to change your existing name for free. So if you were once "Legolopp" you could become "Captain Legolopp," "Legolopp Bubbleworth," "Brick Loppington," "Lopportunity Gnox," or... well, you get the idea.