School for Children with Disabilities research 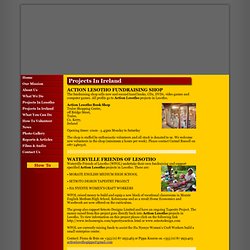 All profits go to Action Lesotho projects in Lesotho. Action Lesotho Book Shop Tralee Shopping Centre, off Bridge Street, Tralee, Co. Kerry, Ireland Opening times: 10am - 5.45pm Monday to Saturday The shop is staffed by enthusiastic volunteers and all stock is donated to us. WATERVILLE FRIENDS OF LESOTHO Waterville Friends of Lesotho (WFOL) undertake their own fundraising and support specified Action Lesotho projects in Lesotho. WFOL raised money to build and equip a new block of vocational classrooms in Morate English Medium High School, Kolonyama and as a result Home Economics and Woodwork are now offered on the curriculum. The group also support Setsoto Designs Limited and have an ongoing Tapestry Project. WFOL are currently raising funds to assist the Ha Nyenye Women's Craft Workers build a small enterprise centre.

Guardian - [Guide/PVE] Guardian 101 - A Beginner's Text. These are just a few suggestions. 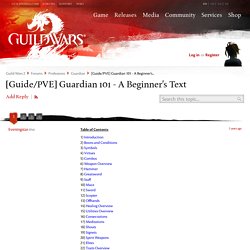 I haven’t even begun to figure out all the possible synergies, strategies and tactics available to Guardians. No one has, and none of us will for a long, long time. That’s part of the fun of being part of an MMO community during its earliest days—we shape the metagame. This leads me to the end of my guide, but before I wrap things up, I want to talk about a few issues frequently encountered by new players: What’s the best build for dungeons? There isn’t one. If anyone’s asking you to “go healer” for a dungeon, they’re probably just misguided. I’m getting overwhelmed by enemies. Two things: Make judicious use of your defenses. Fights end relatively quickly in Guild Wars 2, and unlike other MMOs, standing toe to toe with the enemy and exchanging blows doesn’t work.

Along with dodging, learn to use defenses judiciously. Mary Immaculate College. People with Disabilities and the Role of Social Workers in Lesotho. Christopher Chitereka, Department of Anthropology, Sociology and Social Work, The National University of Lesotho, Southern Africa 1 Introduction According to Pachaka (2003:109) the United Nations General Assembly adopted the World Programme of Action Concerning Disabled Persons at its 37th regular session in 1982. 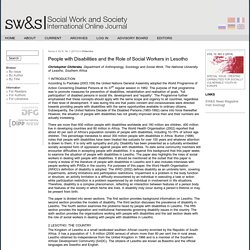 The purpose of that programme was to promote measures for prevention of disabilities, rehabilitation and realisation of goals, “full participation” of disabled persons in social life, development and “equality”. The Programme further emphasised that these concepts should apply with the same scope and urgency to all countries, regardless of their level of development. It was during this era that public concern and consciousness were directed towards providing people with disabilities with the same opportunities available to ordinary citizens. The paper is divided into seven sections. 2 Lesotho: The Country Poverty is widespread. CBM International. CBM International. Campaigning for disability rights in Lesotho. Disabled people in Lesotho face many barriers which lead to poverty and isolation, including negative attitudes towards disability and a lack of national legislation to protect their human rights. 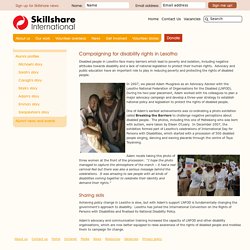 Advocacy and public education have an important role to play in reducing poverty and protecting the rights of disabled people. In 2007, we placed Adam Musgrave as an Advocacy Advisor with the Lesotho National Federation of Organisations for the Disabled (LNFOD). During his two-year placement, Adam worked with his colleagues to plan a major advocacy campaign and develop a three-year strategy to establish national policy and legislation to protect the rights of disabled people. One of Adam’s earliest achievements was co-ordinating a photo exhibition called Breaking the Barriers to challenge negative perceptions about disabled people.

The photos, including this one of Matlekeng who was born with autism, were taken by Eileen O’Leary. Lesotho National Federation of Organisations of the Disabled (LNFOD) Organisation Type: Local NGO Target Group: Abused Children, Disabled, Orphans and Vulnerable Children, People living with HIV, Women, Youth Paid Staff: 5 plus support staff. 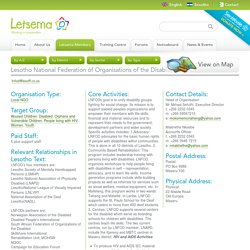 Intellectual Disability Association of Lesotho. Breaking_The_Barriers_Article.pdf. Realising inclusive education for children with disabilities in Lesotho. Author: Precious EriamiatoeLLM (Human Rights and Democratisation in Africa) candidate, Centre for Human Rights, University of Pretoria, South Africa Inclusive education advocates for educational systems with an approach that serves the needs of all learners while identifying and overcoming barriers that prevent persons with disabilities from being included in the educational system. 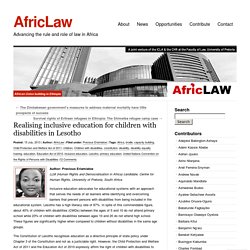 The Constitution of Lesotho recognises education as a directive principle of state policy under Chapter 3 of the Constitution and not as a justiciable right. Like this: Like Loading... Breaking_The_Barriers_Article.pdf. IDAL - Home. Westwood, Los Angeles Guide - Airbnb Neighbourhoods.